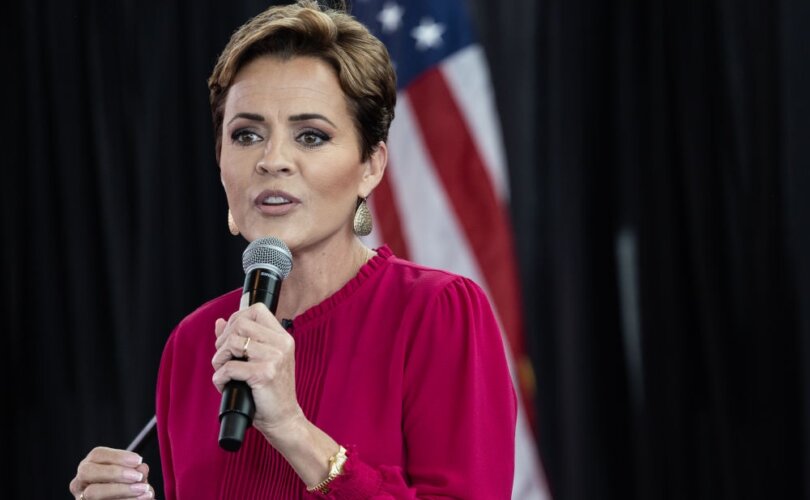 Hobbs, who oversaw the election results in her role as Arizona’s secretary of state, was projected the winner of the crucial contest in the battleground state by the Associated Press and other outlets Monday evening.

“Democracy is worth the wait,” Hobbs said on Twitter after her victory was projected, referencing the fact that Arizona’s vote-counting stretched well beyond Election Day, finally concluding November 15.

Lake, who campaigned largely on tackling corruption in the Arizona election system and previously called on Hobbs to recuse herself from overseeing the election results, has not conceded.

On Monday evening, Lake tweeted a defiant message, remarking, “Arizonans know BS when they see it.”

Arizonans know BS when they see it.

The chairman of the county’s Board of Supervisors told Fox News last week the county was experiencing “some hiccups with about 20% of these tabulators,” but said that Arizona voters would have their ballots counted if they placed them in a box to be counted later by election officials.

The estimated number of voting locations with broken machines later rose from 20% to 30%, heightening anxieties about election integrity

In response to the malfunctions, the campaigns of Lake and Republican U.S. Senate candidate Blake Masters filed an emergency suit requesting an extension of voting hours in Maricopa County, arguing the move was necessary accommodate voters whose opportunity to vote in-person was “decreased” by voting machine errors. However, the request was rejected.

On Tuesday, the Lake campaign’s “war room” account on Twitter suggested the machine malfunctions may have had something to do with Hobbs’ victory.

It turns out our statistical models didn’t account for 30% of the voting machines in Maricopa County “malfunctioning” on election day.

Turning Point USA founder Charlie Kirk shared a screenshot of the mistake on Twitter, which declared that Hobbs won the gubernatorial contest against Kari Lake by a 53-47 vote.

Fox10 Phoenix responded by issuing a statement explaining the graphic showing election results “was never meant to go on air” and had been “part of a test.” The outlet also said it had “taken steps to make sure this cannot happen again.”

Meanwhile, though conservatives have raised skepticism about the legitimacy of Hobbs’ win in Arizona, legacy media outlets have framed her victory as a rebuke of former U.S. President Donald Trump — who endorsed Lake — and the claims of so-called “election-deniers.”

Lake, 53, shot to right-wing stardom after earning Trump’s endorsement, gaining support particularly for her hard line on illegal immigration and strong focus on election integrity. The polished former news anchor simultaneously drew the ire of the left for her conservative positions, with opponents labeling her an “election-denier” and a “conspiracy theorist.”

Characterizing her as an extreme candidate, The Washington Post suggested that her rise to popularity came as a result of “claiming falsely that President Biden’s election was stolen from Trump,” as well as “embracing the hard-right politics of abortion, immigration, pandemic-era mandates and critical race theory.”

Conservatives hoped Lake as governor would enact robust immigration reforms and repair broken election systems in Arizona, a key battleground state that went to Joe Biden in the 2020 presidential contest.

It remains to be seen whether Lake will challenge the results of the controversial gubernatorial election.

This article has been edited for clarity.