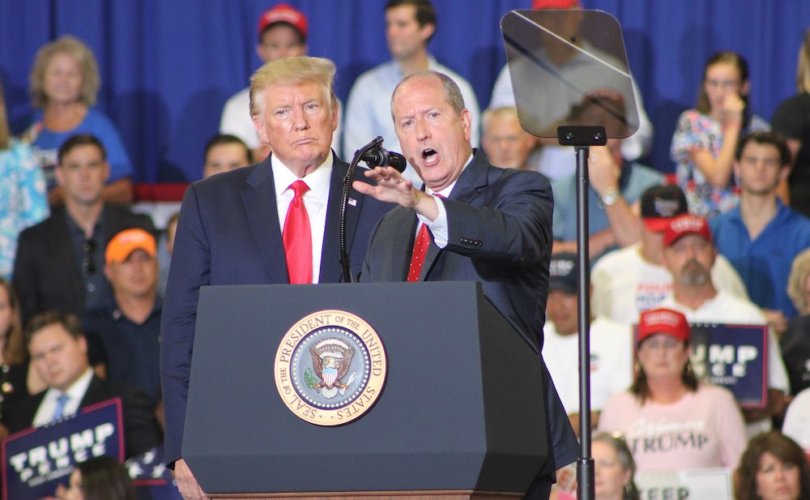 NORTH CAROLINA, September 11, 2019 (LifeSiteNews) — Republican state senator Dan Bishop won a special election to the United States House of Representatives Tuesday night, in a defeat to which LGBT activists are taking special umbrage due to Bishop’s key role in North Carolina’s 2016 fight over people using bathrooms designated for the opposite sex.

A special election was called for North Carolina’s 9th Congressional District seat due to allegations of fraud in last year’s midterm race between Republican Mark Harris and Democrat Dan McCready. Harris declined to run in the special election, opening Bishop’s path to the nomination and eventual victory over McCready, 50.7% to 48.7%.

The self-described “pro-life, pro-gun, pro-wall” Bishop credits President Donald Trump for his victory, telling Fox News, “We really only were competitive in terms of funding for about six weeks. So the president and the vice president stepping in and committing the way they did to this race was tremendous.”

Dan Bishop was down 17 points 3 weeks ago. He then asked me for help, we changed his strategy together, and he ran a great race. Big Rally last night. Now it looks like he is going to win. @CNN & @MSNBC are moving their big studio equipment and talent out. Stay tuned!

BIG NIGHT FOR THE REPUBLICAN PARTY. CONGRATULATIONS TO ALL!

The GOP also won the other seat up for grabs in North Carolina with Republican Gregory Murphy’s defeat of Democrat Allen Thomas in the 3rd Congressional District. But for the LGBT lobby, Bishop’s victory especially stings.

Left-wing and LGBT publications such as The Advocate, Out, and Metro Weekly highlight the fact that in 2016, Bishop was the lead sponsor on North Carolina’s controversial H.B. 2, the so-called “bathroom law” that required public schools in the state to limit restrooms and locker rooms to actual members of the designated sex. The law became a subject of intense national protests from LGBT groups, boycott threats from left-wing businesses, and pressure from the Obama administration, leading the state in 2017 to enact a “compromise” bill that repealed the ban on transgender school bathrooms while leaving in place language that prevented localities from imposing transgender bathrooms on private entities.

His leadership in the transgender bathroom battle was “something that the media is fascinated by,” Bishop said last month. “And I, on occasion, hear people comment on it as an indicator of my having fight in me, which some people like to see.” The bill wasn’t a major part of either Bishop’s or McCready’s messaging during the home stretch of the campaign, though Bishop did reference it in campaign emails.

“They want to make us into a national example — SO THAT NO ONE WILL EVER STAND UP to the radical transgender agenda again,” reads one Bishop campaign email obtained by the Charlotte Observer.