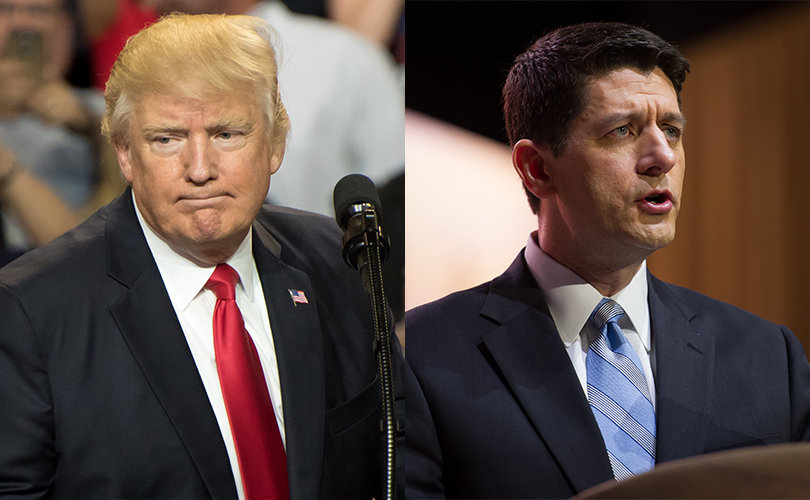 WASHINGTON, D.C., March 31, 2017 (LifeSiteNews) — After President Trump’s replacement for ObamaCare failed to garner enough votes in the House, President Trump admonished members of his party and told them to “get on board.”

Trump lobbied doubters, but in the end, several Republicans refused to vote for his plan. Among them were members of the House Freedom Caucus, who felt the plan didn't go far enough to rid the country of socialized medicine.

Pro-life organizations expressed concerns over loopholes in Trump's healthcare plan that could be used to fund abortion with taxpayer dollars.

It was a tough defeat for the Trump administration within his “honeymoon period” during the first 100 days in office. Politicians on all sides immediately pointed fingers at others.

This week, Trump blamed Freedom Caucus members for his healthcare plan being indefinitely shelved and said he would oppose them in 2018 elections.

The Freedom Caucus will hurt the entire Republican agenda if they don't get on the team, & fast. We must fight them, & Dems, in 2018!

Earlier in the week, the president began his attack on the Freedom Caucus, which is composed of about three dozen Representatives in his party: “Democrats are smiling in D.C. that the Freedom Caucus, with the help of Club For Growth and Heritage, have saved Planned Parenthood & Ocare!”

Response was swift from 20 Ohio pro-life and conservative groups, who wrote a letter to the president politely asking him to back off.

Cincinnati.com characterized the letter as indicating “conservatives will not sit quietly on the sidelines if Trump abandons hard-core GOP principals.”

Pro-life organizations across the country offered a mixed reaction. Some were outraged  and some cautiously tempered.

“This is a curious strategy for President Trump to adopt,” Capital Research Center senior vice president Matthew Vadum told LifeSiteNews. “The House Freedom Caucus has become the conservative conscience in Congress, and to treat them as the enemy is bizarre and ill-advised. This cannot end well.”

Vadum said Trump needs to stay true to those who voted him into office.

“The president should never forget that conservatives got him elected,” he said. “It's not their fault that he backed a lousy, incompetently drafted healthcare bill that contained only crumbs for conservatives and didn't actually repeal the atrocity that is ObamaCare.”

Vadum advised Trump to “step back, take a deep breath, and rise to the occasion. He should become the conservative Commander-in-Chief that America so desperately needs after the era of moral darkness that the Obama administration foisted on the country.”

For most pro-life organizations, the most important failure last week was the failure to defund the nation's largest abortion conglomerate.

“Planned Parenthood needs to be defunded by any means possible and Congress needs to keep their promise to do so,” Students for Life president Kristan Hawkins told LifeSiteNews. “This is something many, many Republicans ran on and campaigned on and it needs to be done immediately.”

Hawkins believes that those who stand for the sanctity of innocent human life must speak out, and speak out now.

“Pro-lifers should put pressure on their elected officials to keep their promises,” she said.  “Every day they keep sending checks to Planned Parenthood is another 888 lives lost.”

“The majority party has had years to come up with a plan to replace ObamaCare and rally the troops to get it done. This is classic political nonsense, not really ever serious about solving problems or dealing with issues important to their base,” Fr. Imbarrato told LifeSiteNews.”Maybe they talk the talk on pro-life issues, but they really care very little about taking the steps necessary to end pre-born child killing.”

The priest rhetorically asked all pro-lifers, “When are we going to realize that until we unite and exert our will on this immoral and corrupt government, nothing is going to change?” he challenged. “The elected class only understands one thing — political power.  (Pro-lifers) need to get united and acquire the will necessary to exert political power over the collective immoral elected class.”

“I would like to know why President Trump is attacking pro-life conservatives when he ran on a pro-life platform and to date has done nothing to end the slaughter of millions of Americans in the womb,” Vitale said. “His budget is a 10-year budget but defunds Planned Parenthood for one year, which means he is funding them for nine.”

His advice for President Trump?

“Don't attack conservatives, attack those killing innocence American life in the womb as you promised,” he said. “Or are you going to be yet another bait and switch politician?”

Camille Giglio, director of the California Right to Life Committee, said ObamaCare needs to be completely repealed and not diluted.

“I have listened to the comments made by Freedom caucus member Jim Jordan and I tend to agree with him, and therefore with the actions of the Freedom Caucus,” she explained.  “'One does not make a silk purse out of a sow’s ear.'  In other words, the thinking that one can amend a few words into or out of bad legislation and turn it into something good is false, misleading and dangerous.”

“California Right to Life Committee does not want any abortion, sterilization, sex change operation, in vitro fertilization, or organ transplants paid for with tax dollars,” Giglio reiterated.  “It is all killing or mutilating of the human person, covered under tax funded medical care.”

“President Trump must recognize who are his friends and who are his enemies, and how those people will affect our country,” Francis Holmes of the Apostolate of Divine Mercy Serving Life, Marriage and the Family told LifeSiteNews. “I have total respect for the members of the House Freedom Caucus. Paul Ryan, on the other hand, has illustrated his RINO (“Republican In Name Only”) characteristics. Where are his skills in bringing people together when he ignores the recommendations of fellow Republicans and can't bring consensus among those of his own party?”

“We don't want 'ObamaCare-lite,'” Holmes said. “Trump should be lashing out at Ryan rather than the Freedom Caucus!”

Nevertheless, Holmes held out hope that Trump would come to his pro-life senses.

“I have confidence that the President who has written The Art of the Deal will realize his bad call on this matter and will be able to think through a strategy for bringing all parties together on the important decision to repeal and replace the horrible ObamaCare that was forced upon us by the Democrats,” she said.

“Planned Parenthood remains funded. What a gaffe,” the Apostolate's Shawn Sullivan told LifeSiteNews. “That should be enough to tick off anyone who even pretends to be pro-life.”

“We at the Apostolate are absolutists and the zealots of zealots. We hold anyone's feet to the fire that wavers at all,” Sullivan explained. “Who cares about healthcare and total repeal of some of the worst legislation in the history of humanity when we could have pushed PP out of our pocketbooks? …  Shame on them all.”

“President Trump boasts of mastering the art of the deal, but he can't understand why solid conservatives rejected a raw deal,” Ryan Bomberger of The Radiance Foundation commented. “A smart business person knows the customer. Threatening the core of the GOP is the New Coke approach to politics.”

Some pro-life leaders were more supportive of the president.

“Trump is not a conservative. He is a patriotic populist. As a businessman, he has generally conservative instincts, but, above all, wants to keep his promises and get things done,” Steven Mosher of the Population Research Institute told LifeSiteNews

“I am not a particular fan of RyanCare. I think America needs a free market in healthcare.  But I appreciate the fact that President Trump is keeping his promises,” Mosher said.  “The nomination of Judge Gorsuch, the Executive Order on the Mexico City Policy, the assembling of a pro-life cabinet — all of these bode well for protection of the unborn. In order to keep these promises, he will have to fight, sometimes with members of his own party.”

“The President's hyperbolic criticism of the Freedom Caucus I take with a grain of salt,” he said. “I expect him to eventually get a better healthcare replacement plan working with conservatives. It will work out in the end.”

Several Republican politicians' reactions were sharp. South Carolina Rep. Mark Sanford noted, “The idea of threatening your way to legislative success may not be the wisest of strategies.”

Michigan Rep. Justin Amash tweeted that with this threat to members of his own party, the president has become the establishment politician he campaigned against. “It didn't take long for the swamp to drain Donald Trump.  No shame, Mr. President. Almost everyone succumbs to the D.C. Establishment.”

Amash, a Freedom Caucus member, added, “Most people don’t take well to being bullied. It may allow a child to get his way, but that’s not how our government works.”

Idaho's Raúl Labrador, another Freedom Caucus member, tweeted, “Freedom Caucus stood with u when others ran. Remember who your real friends are. We're trying to help u succeed.”

“I think Congress failed the president rather than the other way around, and I can understand his frustration,” Franks said. “I think we can get along with the president. I think we’re the best friends the president has in this situation.”

The Freedom Caucus, formed in 2015, has stood against the political establishment in several showdowns. That includes the third-longest government shutdown in history, which helped oust House Speaker John Boehner. Members stand unwaveringly on conservative, pro-life principles, even being denied committee positions and congressional trips by party leadership.

Philly.com describes the group as unique in the political landscape. “The group is distinctive because of its members' willingness to risk their offices, political relationships, and even the basic functioning of the federal government to stay true to their values.”

Ryan said the bill will remain off the House floor for the time being because it is “too big of an issue to not get right.”