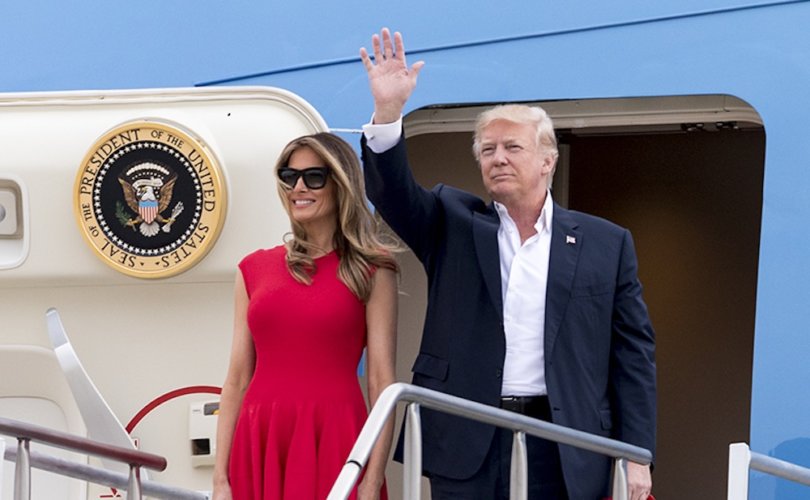 WASHINGTON, D.C., July 4, 2017 (LifeSiteNews) — President Trump gave a rousing religious-themed speech at the Kennedy Center Saturday, declaring, “As Americans, we love our country, we love our families, we love our freedom, and we love our God.”

The Celebrate Freedom Rally featured patriotic songs performed by the 500-voice choir of First Baptist Church of Dallas backed by the church’s orchestra.  The focus of the evening was gratitude to U.S. veterans for their sacrificial service and fidelity to “our God” from Whom our freedom comes.

“America always affirmed that liberty comes from our Creator,” the president proclaimed.  “Our rights are given to us by God, and no earthly force can ever take those rights away.”

The president’s religious comments were met with thunderous applause.  Clearly encouraged, he went on to criticize the mainstream media.

“The fake media is trying to silence us,” the president said, “but we will not let them, because the people know the truth.”

Then he offered his election as an example of citizens standing up to the mainstream media’s dictatorship.  “The fake media tried to stop us from going to the White House,” he said.  “But I’m president, and they’re not.”

That comment received a sustained standing ovation, in an atmosphere more like a political rally than a Kennedy Center event.

“The fact is, the press has destroyed themselves, because they went too far,” the president said.  “Instead of being subtle and smart they used a hatchet, and the people saw it right from the beginning.”

“The dishonest media will never keep us from accomplishing our objectives on behalf of our great American people. …  Their agenda is not your agenda… I will never stop fighting for you.”

“For too long, politicians have tried to centralize authority among the hands of a small few in our nation’s capital,” the president criticized.  “Bureaucrats think that they can run over your lives, overrule your values, meddle in your faith, and tell you how to live, what to say, and where to pray.  But we know that parents, not bureaucrats, know best how to raise their children and create a thriving society.”

“We know that families and churches, not government officials, know best how to create a strong and loving community,” he concluded.

“And above all else we know this, in America, we don’t worship government, we worship God,” he said, to thunderous applause.

“The American founders invoked our Creator four times in the Declaration of Independence,” Trump pointed out, as he listed other Christian references in the nation’s founding documents and by the founding fathers.  Then the president talked about his unity with those founding Creator references, and mentioned, “I remind you that we are going to start saying, ‘Merry Christmas!’ again.”

“Inscribed on our currency is the words, ‘In God We Trust,’” Trump noted.  “My administration will always support and defend your religious liberty.”  Later he added, “I will not let you down.”

“We don’t want to see God forced out of the public square, driven out of our schools, or pushed out of our civic life,” the president said.  “We want to see prayers before football games if they want to give prayers.”

“We want all children to have the opportunity to know the blessings of God.  We will not allow the government to censor sermons (or) restrict the free speech of our pastors and our preachers and the people that we most respect.”

“That is why … I just signed an executive order following through on my campaign pledge to stop the Johnson Amendment from interfering with your First Amendment rights.”  The 1964 amendment, named after President Lyndon Baines Johnson, sought to discourage Christian leaders from speaking out on public issues by threatening churches’ tax deduction status.

“As long as I am president, no one is going to stop you from practicing your faith, or from preaching what is in your heart,” Trump promised.

The president listed campaign promises which he has already fulfilled, and emphasizing his administration’s veterans’ healthcare improvements and accountability.  “I have delivered on trade, on the economy, on the Supreme Court, on the Second Amendment, on our military, for our veterans, and on our borders,” he said.

Trump added that his administration’s support of border law enforcement has resulted in “record stoppage” of illegal immigration, which the conservative audience stood up and applauded.

“And we are supporting our incredible police and law enforcement” garnered another standing ovation.

Later revisiting immigration, the president spoke of “radical Islamic terrorism,” explaining, “We cannot allow this terrorism and extremism to spread in our country, or to find sanctuary on our shores or in our cities.  We want to make sure that anyone who seeks to join our country shares our values, and has the capacity to love our people.”

He spent a great deal of his speech introducing veterans present who sacrificed to guard American freedom, and told inspiring stories of their heroism and their faith.

Trump concluded, “Whether we are black or brown or white we all bleed the same red blood, we all salute the same great American flag, and we are all made by the same Almighty God,” he said. “As long as we have pride in our beliefs, courage in our convictions, and faith in our God, we will not fail.”

“As long as our country remains true to its values, loyal to its heroes, and devoted to its Creator, then our best days are yet to come,” he said, “because we will make America great again.”

The president was introduced by Dallas First Baptist Pastor Robert Jeffress, who attributed growing hope among Christians to Trump’s election.

“In recent years, there have been those who have tried to separate our nation from its spiritual foundation,” Rev. Jeffress said, “and that reality has caused many of us, many Christians, to despair, and to wonder: ‘Is God finished with America?’ ‘Are our best days over?’ ‘Has God removed His hand of blessing from us?’ But in the midst of that despair came November the eighth, twenty-sixteen!”

“That day represented the greatest political upset in American history,” Jeffress continued, “because it was on that day, November the eighth, that God declared that the people, not the pollsters, were going to choose the next president of the United States –and they chose Donald Trump!”

“No president has entered the Oval Office with as many natural gifts and leadership abilities as President Trump,” Jeffress claimed, quoting his own inaugural sermon.

“President Trump won the evangelical vote by the largest margin in history, because Christians understood that he alone had the leadership skills necessary to reverse the downward Death Spiral our nation was in,” Jeffress boasted, to wild applause.

“Millions of Americans believe the election of President Trump represented God giving us another chance –perhaps our last chance– to truly make America great again,” Jeffress said.  “We thank God every day that He gave us a leader like President Trump.”