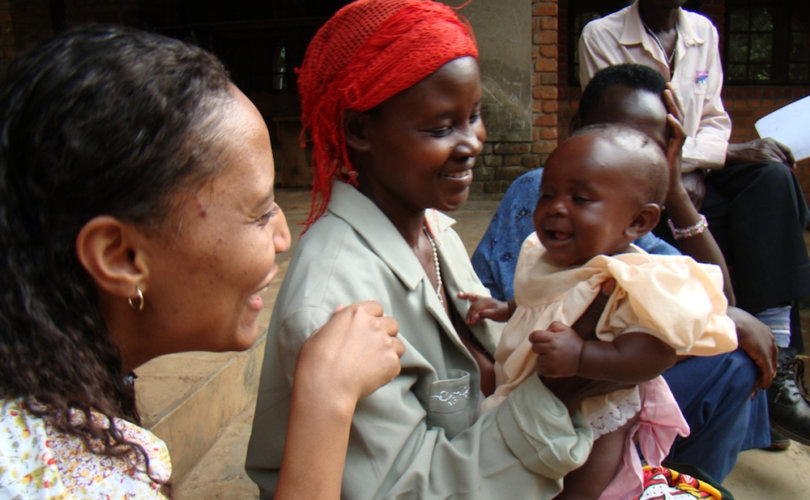 A baby with mother in UgandaHuman Life International

AFRICA, May 23, 2018 (LifeSiteNews) — Two of the world’s most prolific abortion performers have been forced to partially shut down their operations in Africa, thanks to one of Donald Trump’s earliest actions as president.

The UK-based Marie Stopes International (MSI) has closed 22 of its 62 Madagascar-based outreach teams, 17 of its 35 in Uganda, and 600 of its 1,200 in Zimbabwe, Church Militant reported. The International Planned Parenthood Federation (IPPF) has closed 22 programs in sub-Saharan Africa. Both groups will also be canceling programs in Togo, Ethiopia, Ivory Coast, and Burkina Faso.

“Commitments have been made, but the money has not been forthcoming,” IPPF's Kwamboka team complained. “This reliance on aid from other countries (…) cannot go on.”

The abortion giants’ financial woes stem from Trump’s reinstatement of the Mexico City Policy last year, which bars the United States’ $8.8 billion in foreign aid from being distributed to entities that perform abortions. Since Ronald Reagan conceived the policy, each president routinely reverses his opposing-party predecessor’s decision on it upon taking office, although Trump took the additional step of expanding it to groups that promote or discuss it.

The policy requires foreign aid recipients to certify that they will not “perform or actively promote abortion as a method of family planning in foreign countries or provide financial support to any other foreign (NGO) that conducts such activities.”

The left-wing organization calling itself Human Rights Watch claims the Mexico City Policy has a “devastating impact” because it also deprives countries of the nutrition, vaccination, child care, and other disease treatment services provided by the organizations that refuse to comply.

However, MSI and IPPF are two of only four non-government organizations (NGO) that have rejected the funds, and the aid money continues to be distributed to 733 other NGOs. Further, it is MSI and IPPF who ultimately chose to forgo the money in exchange for continuing abortions.

Mark Green, administrator of the U.S. Agency for International Development (USAID), has testified before Congress that while it is impossible to financially meet all of the world’s needs, “(e)verything we are trying to do is to work with country partners on their journey to self-reliance – these countries one day should lead their own development.”

In addition, a 2010 report found that in Ethiopia, for instance, the Mexico City Policy has had a positive impact on the population’s understanding of abortion by leading to people to ask, “If abortion is a positive development for Ethiopian women’s health, then why does the U.S. government not support it?”

Restoring the Mexico City Policy was the first of numerous pro-life actions the Trump administration has taken, including pro-life judicial and administrative appointees, rolling back the Obamacare abortifacient coverage mandate, opening a federal investigation into Planned Parenthood, supporting abstinence education and religious liberty protections, advocating a ban on late-term abortions, and most recently cutting abortion facilities off from more than $50 million per year in family planning funds.