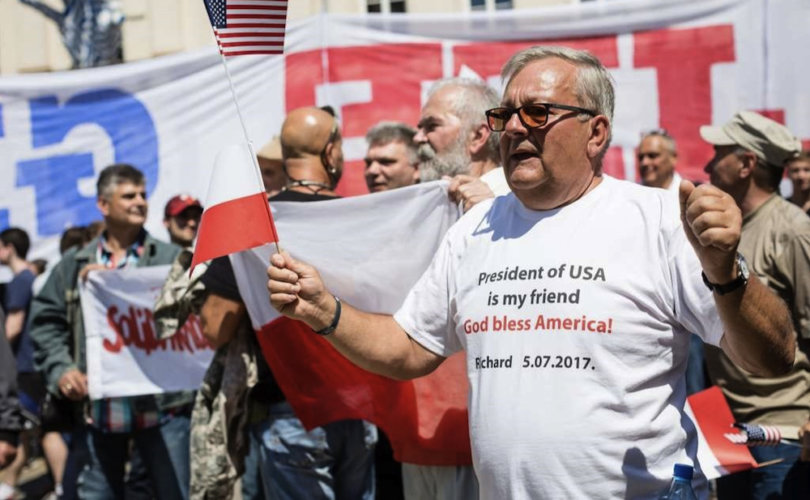 In Europe for the Group of 20 economic summit of world leaders, Trump first stopped in Warsaw to strengthen the already friendly alliance between his country and Poland.  “America is eager to expand our partnership with you,” Trump said.

He addressed more than 15,000 Poles in attendance at historic Krasinski Square in front of a monument commemorating the 1944 Warsaw Uprising during Nazi occupation in World War II.

“Poland is the geographic heart of Europe. But more importantly, in the Polish people, we see the soul of Europe,” the president said in the highly acclaimed speech. “Your nation is great because your spirit is great and your spirit is strong.”

Poles came from throughout the country to see Trump. “We are here from our own convictions and belief,” Stanislaw Niesyn, who traveled 170 miles for the occasion, told the Associated Press.

Trump noted the historic ties between the two nations. “Polish heroes and American patriots fought side by side in our War of Independence and in many wars that followed,” he said. “Our soldiers still serve together today in Afghanistan and Iraq, combating the enemies of all civilization.”

“The signs of this friendship stand in our nation’s capital. Just steps from the White House, we’ve raised statues of men with names like Pulaski and Kosciuszko,” Trump pointed out. “The same is true in Warsaw, where street signs carry the name of George Washington and a monument stands to one of the world’s greatest heroes, Ronald Reagan.”

“Poland is a land of great heroes. You are the proud nation of Copernicus … Chopin, St. John Paul II,” Trump continued. “And so, I am here today not just to visit an old ally, but to hold it up as an example for others who seek freedom and who wish to summon the courage and the will to defend our civilization.”

Former President Lech Walesa, who led Poland to freedom from communism with his “Solidarity” movement, was also present and listened attentively to Trump’s remarks.

The leader of the free world recounted Poland’s heroic stands against Nazism and Communism. “For two centuries, Poland suffered constant and brutal attacks. Despite every effort to transform you, oppress you or destroy you, you endured and overcame,” he praised. “The triumph of the Polish spirit over centuries of hardship gives us all hope for a future in which good conquers evil and peace achieves victory over war.”

Quoting the Polish Catholic Bishop and martyr Michal Kozal, “More horrifying than a defeat of arms is a collapse of the human spirit,” President Trump recounted the Poles’ life or death struggle under Communism.

“Through four decades of Communist rule, Poland and the other captive nations of Europe endured a brutal campaign to demolish your freedom, your faith, your laws, your history, your identity;  indeed, the very essence of your culture and your humanity,” he said. “Yet through it all, you never lost that spirit. Your oppressors tried to break you, but Poland could not be broken.”

Then the U.S. President attributed Poland’s ultimate victory to prayer.

“On June 2nd, 1979, one million Poles gathered around Victory Square for their very first Mass with their Polish pope,” he said. “That day every Communist in Warsaw must have known that their oppressive system would soon come crashing down.”

“They must have known it at the exact moment during Pope John Paul II’s sermon when a million Polish men, women and children suddenly raised their voices in a single prayer.”

“In those words, the Polish people … found new courage to face down their oppressors,” the president said.

“Together with Pope John Paul II, the Poles reasserted their identity as a nation devoted to God,” Trump said. “And with that powerful declaration of who you are, you came to understand what to do and how to live.”

Not letting up on the theme of crying out to God for deliverance and victory, President Trump said true Americans pray that same prayer. “The people of Poland, the people of America and the people of Europe still cry out, ‘We want God!’”

Listing many strengths of Polish culture and faith, Trump said the United States shares those same strengths, including “cherish(ing) inspiring works of art that honor God.”

“We put faith and family, not government and bureaucracy, at the center of our lives,” the president added.

“And above all,” the president told pro-life Poland, “we value the dignity of every human life, protect the rights of every person, and share the hope of every soul to live in freedom.”

“That is who we are,” Trump declared. “Those are the priceless ties that bind us together as nations, as allies and as a civilization.”

“As long as we know our history, we will know how to build our future,” the superpower leader advised.

The President then noted the alliance of countries that helped free Poland from oppression and connected NATO to today’s global challenges. “This continent no longer confronts the specter of communism. But today … there are dire threats to our security and to our way of life,” he said.

“We are confronted by another oppressive ideology, one that seeks to export terrorism and extremism all around the globe,” Trump soberly warned. “We are fighting hard against radical Islamic terrorism. And we will prevail.”

“We cannot accept those who reject our values and who use hatred to justify violence against the innocent.”

“We must work together to confront forces, whether they come inside or out, from the south or the east, that threaten over time to undermine these values and to erase the bonds of culture, faith and tradition that make us who we are,” he said.

“The fundamental question of our time is whether the West has the will to survive,”  Trump said. “Do we have the confidence in our values to defend them at any cost?”

“Do we have the desire and the courage to preserve our civilization in the face of those who would subvert and destroy it?” he rhetorically asked.

“We can have the largest economies and the most lethal weapons anywhere on Earth, but if we do not have strong families and strong values, then we will be weak and we will not survive.”

Trump said the war is one for our values and traditions. “Our own fight for the West does not begin on the battlefield,” he said. “It begins with our minds, our wills and our souls.”

“Just as Poland could not be broken, I declare today for the world to hear that the West will never, ever be broken,” the president proclaimed. “Our values will prevail, our people will thrive, and our civilization will triumph.”

The Commander-in-Chief reiterated the U.S. pledge to “stand firmly behind Article 5,” a NATO promise to defend member nations if they come under attack.

Trump alluded to “powers that seek to test our will … and challenge our interests,” and then got specific, “urging” Russia “to cease its destabilizing activities in Ukraine and elsewhere, and its support of hostile regimes, including Syria and Iraq.”

Summarizing his stance on border protection, legal vs. illegal immigration, and vetting refugees, the President said, “While we will always welcome new citizens who share our values and love our people, our borders will always be closed to terrorism and extremism of any kind.”

From the crowd came more shouts of approval.

“So together let us all fight like the Poles, for family, for freedom, for country and for God,” the president concluded. “God bless you, God bless the Polish people, God bless our allies, and God bless the United States of America.”

The President’s entire speech can be found here.