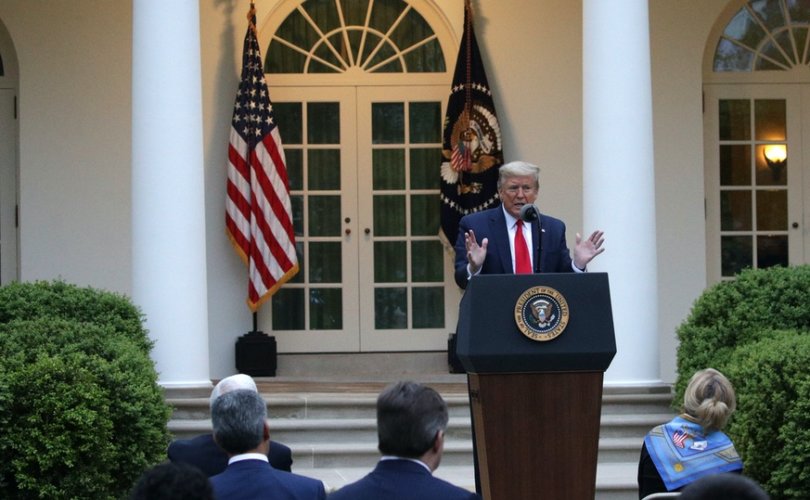 “American taxpayers provide between $400 million and $500 million per year to the WHO. In contrast, China contributes roughly $40 million,” Trump pointed out. “As the organization’s leading sponsor, the United States has a duty to insist on full accountability. One of the most dangerous and costly decisions from the WHO was its disastrous decision to oppose travel restrictions from China and other nations.”

“They were very much opposed to what we did. Fortunately, I was not convinced and suspended travel from China,” saving thousands of American lives, Trump said. “The WHO’s attack on travel restrictions put political correctness above lifesaving measures.”

Trump said if other nations had “likewise suspended travel from China, countless more lives would have been saved. Instead, look at the rest of the world. Look at parts of Europe. Other nations and regions who followed WHO guidelines and kept their borders open to China, accelerated the pandemic all around the world. Many countries said, ‘we’re gonna listen to the WHO.’ They have problems the likes of which they cannot believe. Nobody can believe. The decision of other major countries to keep travel open was one of the great tragedies and missed opportunities from the early days” of the pandemic.

Trump blasted the WHO for failing in its “basic duty” to “work with countries to ensure that accurate information about international health is shared in a timely manner. And if it’s not, to independently tell the world the truth about what is happening.”

The WHO “must be held accountable,” he insisted. “It is time, after all of these decades. The WHO failed to investigate credible reports from sources in Wuhan that conflicted directly with the chinese government's official accounts.”

Pro-life advocates have long opposed the WHO over its support of abortion, and the coronavirus pandemic has also shed light on the U.N. entity’s suspicious ties to communist China. Senator Marco Rubio, R-FL, has been a sharp critic of the WHO. Its “subservience to Beijing” and the Chinese Communist Party has “undermined global health” and “could prove fatal” in the coronavirus pandemic, the senator argued on April 1.

In March, Dr. Antonella Lavalanet, a medical officer in the WHO’s “Maternal and Perinatal Health & Preventing Unsafe Abortion Team,” said that abortion should be considered an “essential service” during the coronavirus crisis. The WHO representative said that even “where supplies of antibiotics are not available, abortion should not be denied” and women should be encouraged to self-abort at home during the first trimester of pregnancy.

On March 22, Mike Ryan, WHO’s executive director of emergencies program, suggested to authorities that they find those who may have the coronavirus in family homes and “remove them.”

Ryan declared that in response to the COVID-19 pandemic, officials may have to enter homes and remove family members. The contagion has been “taken off the streets and pushed back into family units.”

“Now we need to go and look in families to find those people who may be sick and remove them and isolate them in a safe and dignified manner,” Ryan said March 22, a “threat” FOX host Tucker Carlson found ominous.

“To this day,” the WHO “has deprived the scientific community of essential data,” Trump said, and “the silence of the WHO on the disappearance of scientific research and doctors and…new restrictions on the sharing of research into the origins of COVID-19 in the country of origin is deeply concerning.”

“Our country will be forced to find other ways to work with other nations to achieve public health goals. We will have no choice but to do that. Our country is now experiencing – you look all around the world – tremendous death and economic devastation. Those tasked with protecting us by being truthful and transparent failed to do so. It would have been so easy to be truthful. So much death has been caused by their mistakes.”

“If the World Health Organization wants to behave like the China Health Organization, then let China pay for it,” commented China expert Steven Mosher, president of the Population Research Institute. “As a practical matter, America's foreign aid dollars will go a lot further if they are given to American charities, rather than funnelled through an inefficient and corrupt U.N. bureaucracy.”

The corruption of the WHO by the CCP is part of its ongoing long march through UN institutions. China now controls four UN agencies, and has its operatives in high positions in most of the others. The idea that the CCP would ever be a responsible member of the WHO or or any UN agency is delusionary. Xi Jinping's “dream” remains that of Mao, one national aggrandizement and eventual world domination. The capture and corruption of UN agencies is simply a means to that larger end. It must stop. And defunding UN agencies until it does is a good first step.

On April 7, Trump hinted during a coronavirus briefing that he was open to defunding the WHO.

“They seem to err always on the side of China and we fund it, so I want to look into it,” he said.

A reporter pressed him, “Is it time to freeze [U.S.] funding to the WHO during a pandemic?”

“No, maybe not, I am not saying that I am going to do it, but we are going to look at it,” Trump replied. “We are going to investigate it, we are going to look into it… but we will look at ending funding because you know what, they called it wrong and if you look back over the years even, they’re very much – everything seems to be very biased towards China – that's not right.”

Reggie Littlejohn, President of Women’s Rights Without Frontiers – a group that fights forced abortion in China – called Trump’s defunding of WHO a “bold and appropriate move.”

“The WHO has botched its handling of the coronavirus pandemic from the beginning, costing countless lives,” she told LifeSiteNews. “The head of the WHO went to China and met with Xi Jinping. Instead of exposing the lack of transparency of the Chinese government, the WHO simply believed the CCP’s propaganda playing down the severity of the outbreak. The WHO opposed President Trump’s travel ban from China, choosing political correctness over health and safety. The WHO dragged its feet on declaring the coronavirus a pandemic, long after this reality had been recognized by other world leaders.”

Everyone has been affected. I have a close friend whose small family business that she sacrificed deeply to build from the ground up has now been decimated.  I have another close friend who we believe had the coronavirus and now, thank God, is slowly recovering. If he had died, my life would never be the same. My heart is wrenched when thinking of the tens of thousands who have died alone in quarantine, their family members prevented from being with them. How much of this could have been prevented if the WHO had been doing its job?

The world counted on the WHO to exert leadership in this global crisis. They failed miserably. U.S. tax dollars will be better spent either helping other organizations with proven track records effectively combatting this pandemic or founding a new organization to address this crisis. The WHO and the Chinese government should be held accountable together for every life lost due to their lack of leadership and transparency.

Former American ambassador to the U.N. Nikki Haley praised Trump for ceasing funding to WHO. So did Republican lawmakers. Conservative commentator Allie Beth Stuckey called it “one of the best decisions of his presidency.”

Great move by @realDonaldTrump. We should not send funds until the WHO has been reformed and been held accountable. https://t.co/931wYHoXmF

GREAT on Trump for pausing funding to WHO. One of the best decisions of his presidency

Exactly right @realDonaldTrump. The #WHO has become a propaganda arm of the #China Communist Party and is filled with CCP apologists. It has failed the world in this emergency https://t.co/LOuIppJOuZ

Agree �� % with @realDonaldTrump decision to halt funding to @WHO due to their abject failure regarding #COVID-19 – instead @WHO spewed Chinese Communist Party propaganda that led to terrible global loss of life and economic wreckage�� pic.twitter.com/oNA3cMDHS8

I’m glad to see @realDonaldTrump take this step. The @WHO has fiercely defended the Chinese Communist Party while they created a worldwide pandemic. American taxpayers shouldn’t have to give them another dime. https://t.co/wr5Q3v4ZIl

The Victims of Communism Memorial Foundation has published an analysis and timeline of the Chinese communist party’s deception of the world regarding the coronavirus and how it is “using the World Health Organization as an instrument of propaganda.”

Read all LifeSiteNews coverage of the coronavirus crisis and how it relates to pro-life issues, faith, and freedom here.

This article was updated at 9:29 p.m. EST on April 14, 2020 to include comments from Steven Mosher and Reggie Littlejohn.