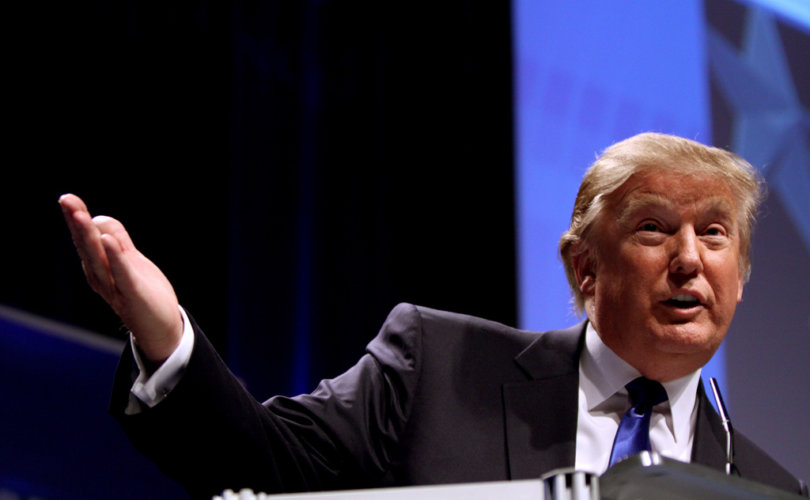 WASHINGTON, D.C., April 21, 2016 (LifeSiteNews) – This morning, Donald Trump said he would “absolutely” change the Republican Party's platform to allow abortion for the “three exceptions” of rape, incest, or to save the life of the mother. This afternoon, national pro-life and conservative leaders told LifeSiteNews: No, he won't.

The notion that one man, even a presidential candidate, can unilaterally change the party platform is misguided, Kristan Hawkins of Students for Life of America told LifeSiteNews. The party's policies are “decided upon by elected delegates of our party…as well as the pro-life movement,” which has invested a great deal of effort to preserving the party's pro-life plank over the years.

Tom McClusky of March for Life Action, who has worked behind the scenes on the pro-life platform, said the GOP platform is important, because it “sets the standard that all candidates need to work from, and the suggestion that the platform should weaken its position on the pro-life issue would set back years of hard work in the pro-life movement.”

Hawkins questioned the logic of Trump's position. “Does he want to put an exception into the platform saying it's OK to murder a two-year-old child whose father is a rapist, too? Or is he only OK with it as long as the child hasn't been born yet?” she asked.

The Republican Party platform currently calls for a Human Life Amendment to the U.S. Constitution and does not specify that it must contain any exceptions.

“Donald Trump has the audacity to suggest that the Republican grassroots has been wrong to believe in protecting innocent children like me who were conceived in rape,” Rebecca Kiessling of Save The 1 told LifeSiteNews. “My message to Donald Trump, and others like him is this: Punish rapists, not babies!”

Viguerie, who has endorsed Senator Ted Cruz, sees the notion of liberalizing the Republican Party platform as “confirmation of those of us who opposed Trump.”

“I can't think of a major issue that he didn't hold a different position five or 10 years ago – whether it's on immigration, illegal immigration, the life issue, social and cultural issues, economic issues, taxes,” said Viguerie, the proprietor of ConservativeHQ.com. “If he were to be the nominee, it would split the Republican Party in a way that it would not recover, for this election if in the future, even.”

He believes this is only the beginning of a general election pivot further to the Left.

“He's going to attempt to hijack the Republican position on these issues and move them toward the liberal Democrat position,” said Viguerie, who has decades of experience fighting for conservative causes within the GOP.

His friends, conservative leaders Morton Blackwell and Phyllis Schlafly, have spent decades fighting attempts to repeal or water down the party's pro-life plank, he said.

“People who support Mr. Trump, like my friend Phyllis Schlafly, should be very, very worried. He's going to betray them like he's betrayed his wives, his friends, his investors over the years,” Viguerie told LifeSiteNews. “As Ronald Reagan said in a different context, 'You ain't seen nothing yet.'”

Others felt the billionaire needed a better understanding of his newfound pro-life views.

“Mr. Trump obviously doesn’t really understand what it means to be pro-life when it comes to abortion. There is either a baby worth protecting from a brutal death, or there isn’t,” Darlene Pawlik told LifeSiteNews.

Pawlik was conceived in rape and sexually trafficked in her early teens before faking an abortion to escape her captors. She said, “In case of rape or incest, the baby is not the aggressor. He or she is a second victim of a crime and deserves to be protected.”

Mothers who conceive by rape “need help, hope, and healing – but they don’t need abortion to further traumatize them.”

A study conducted by Sandra Kathleen Mahkorn, M.D. and William V. Dolan, M.D. found that 70 percent of women who are raped choose not to have an abortion. A second study, conducted in 2000 by the Elliot Institute, found that 78 percent of the minority of women who chose abortion regretted that decision.

None of the women who gave birth regretted doing so, the study found.

Hawkins said Mr. Trump's comments on the “Today” show, as well as others on abortion in the recent past, prove that the Republican frontrunner needs to familiarize himself with the desires and goals of the pro-life movement.

“Students for Life would like to invite him to one of our trainings on campus,” Hawkins said. “We hope his campaign reaches out soon as we will schedule a special training for him to attend immediately.”