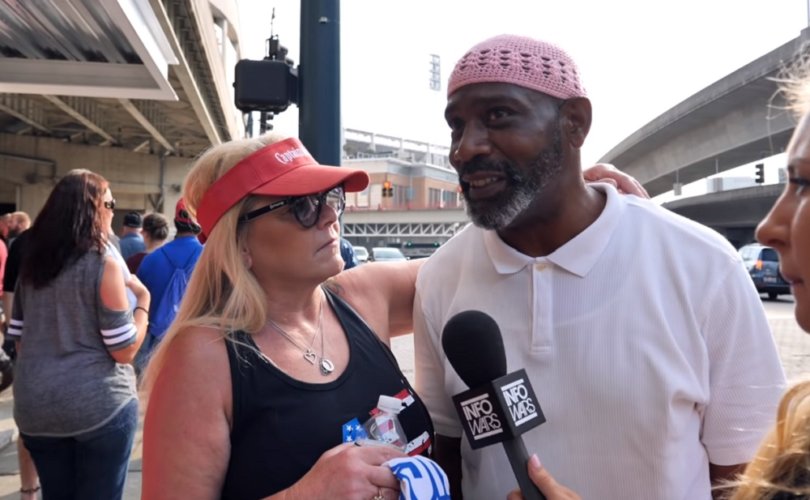 WARNING: The videos included in this post contain offensive language.

August 4, 2020 (American Thinker) — In August 2019, Millie Weaver (AKA Millennial Millie) went to a Trump rally in Cincinnati, Ohio. She carried with her a microphone emblazoned with Alex Jones's InfoWars logo. Whatever one feels about InfoWars is irrelevant. What is relevant, instead, is a 50-second-long clip of the video revealing that it is Trump's supporters, not the left, who truly embrace the idea that “love trumps hate.”

The resulting video lasts 44 minutes and, if you have the time, is worth watching. The difference between the welcome Trump's supporters offer Marco and the spittle-flecked, obscene, threatening invective that the protesters hurl at Millie is shocking. It certainly shocked Marco.

But for many people, 44 minutes is a long time to commit to a video, especially one that's almost a year old. It scarcely seems relevant enough to justify the time commitment. Even though the Black Lives Matter movement, Marxist though it may be, has thrust racism to the forefront of everything happening in America today, people might still find it hard to bestir themselves to invest time in the video.

At Twitter, though, BIGDAVE did something clever. He reduced the video to a mere 50 seconds. In under a minute, anyone can see the generosity of spirit and the colorblindness on the Trump side and the frightening hatred radiating from the leftists.

His face at the end is Priceless. pic.twitter.com/X1zUmPz0Ll

It is the mindless hatred of angry mobs that have been taught that the world is a zero-sum game and that the only way to survive isn't through liberty and ethics, but, instead, by using hatred to defeat the “other.” This is what people on the American left have become. They don't act like respectable humans in a constitutional democratic republic. They act like ravening animals.

Unfortunately, Millie has lost track of Marco. It would have been interesting to see if his experience last year had any effect on him.