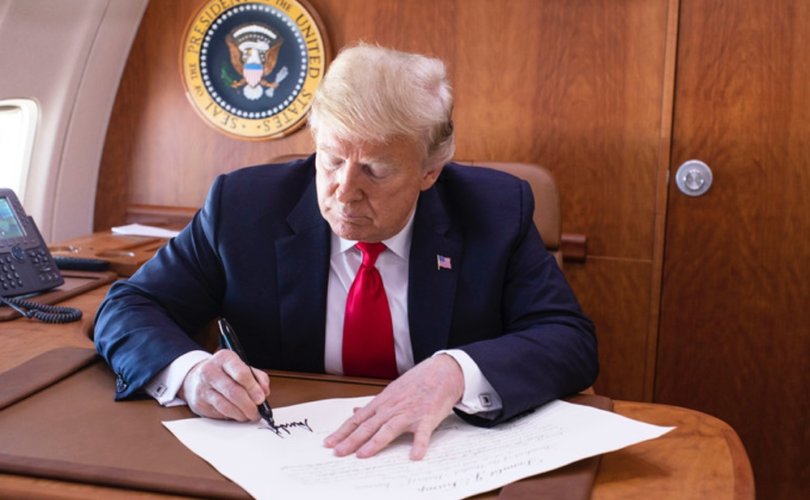 During an address at the National Catholic Prayer Breakfast on Tuesday, acting White House Chief of Staff Mick Mulvaney said those comments were edited in by hand by Trump as he reviewed the final draft of his speech.

The State of the Union followed closely on the heels of New York State’s January 22 passage of the so-called Reproductive Health Act, which enshrined abortion as a “fundamental right” in state law, allows non-doctors to perform abortion, and eliminated pro-life protections for unborn children until their birth.

The law is considered the most radical abortion expansion in the nation and set the stage for other states to follow suit, drawing condemnation from pro-life quarters and beyond.

Within the following week Virginia Governor Ralph Northam also caused a firestorm with his expressed support for late-term abortion in a radio interview discussion of a proposed bill in the commonwealth that would permit abortion for mothers already in the process of giving birth.

Trump castigated both of these extreme affirmations of abortion in no uncertain terms in his State of the Union address, calling upon Congress to pass legislation banning late term abortion and declaring that unborn children are made in the image of God.

“There could be no greater contrast to the beautiful image of a mother holding her infant child than the chilling displays our nation saw in recent days,” he told the nation.

“Lawmakers in New York cheered with delight upon the passage of legislation that would allow a baby to be ripped from the mother’s womb moments before birth,” he said. “These are living, feeling, beautiful babies who will never get the chance to share their love and dreams with the world.”

Trump then continued, “And then, we had the case of the governor of Virginia where he stated he would execute a baby after birth. To defend the dignity of every person, I am asking Congress to pass legislation to prohibit the late-term abortion of children who can feel pain in the mother’s womb.”

“Let us work together to build a culture that cherishes innocent life,” Trump said. “And let us reaffirm a fundamental truth — all children — born and unborn— are made in the holy image of God.”

Trump’s stance on abortion has come around since the 2016 campaign, and he’s taken concrete action to protect and support life in office.

Almost immediately he reinstated and expanded the Mexico City Policy, he has cut off taxpayer funding for the U.N. Population Fund, which supports China’s forced abortion and sterilization program, and he has overturned Obama-era regulations protecting federal funding for abortion facilities. His administration has also acted to defund Planned Parenthood.

Trump has also acted to support federal conscience and religious freedom protections for people of faith.

Nonetheless, the president remains a polarizing figure for many despite his strong pro-life record.

Mulvaney told the prayer breakfast that people of all denominations and faiths in the administration are “very vocal” and are encouraged to “work it into our policies,” according to a report from Crux.

Mulvaney said that in the past two and a half years, the president has told leaders “you’re not doing enough to take care of the Christians in your country,” or on the other hand to the chance to thank particular leaders for their efforts in helping Christians in their particular country.

“I won’t lie to you, that that’s pretty powerful stuff,” Mulvaney said regarding Trump’s engagement on the issue of Christian persecution. He said that the president’s way of speaking about faith “probably hasn’t been articulated in the Oval Office in way too long.”

His recounting of Trump’s impromptu effort to add the lines into his State of the Union address calling out New York’s abortion law Northam’s late term abortion support met with whistles and applause from the audience, the Crux report said.

Despite the political climate and polarization in U.S. politics, Mulvaney told the Catholic gathering that he was “comfortable” serving in the Trump administration and with its priorities, a report from the Catholic Herald said.

“The principles of our [Catholic] faith are alive and well and well-respected in this administration and are driving many of our policies,” Mulvaney said.