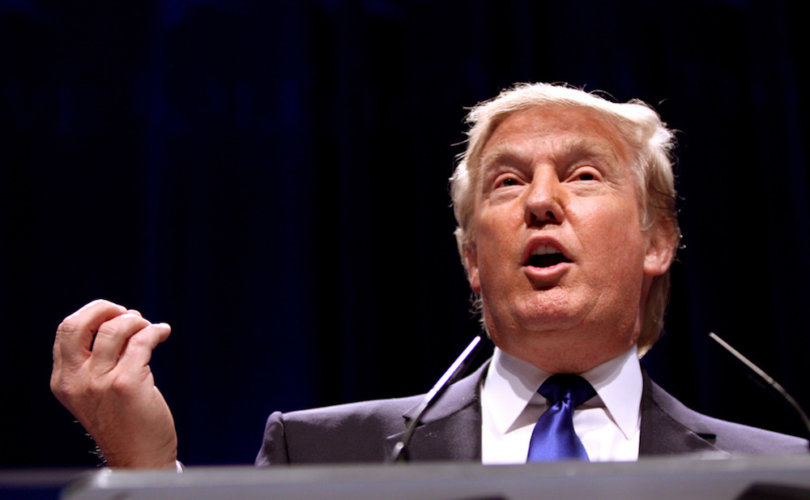 May 18, 2016 (LifeSiteNews) – Donald Trump has said his infamous statement that post-abortive women deserve “some form of punishment” was misunderstood, and that his position on Planned Parenthood will do better than a “heavily conservative” stance in the presidential election.

In late March, MSNBC's Chris Matthews asked a hypothetical question about whether, if abortion were outlawed, women who have abortions should be treated like criminals. Trump responded that women should face some punishment, although he did not specify whether it would involve jail time.

“I didn’t mean punishment for women like prison,” Trump says in a new interview with New York Times reporter Robert Draper, which was published today. “I’m saying women punish themselves. I didn’t want people to think in terms of ‘prison’ punishment, and because of that I walked it back.”

Trump's comments to Matthews outraged many in the pro-life movement, which has sought for decades to highlight how the abortion industry victimizes women for profit. “Mr. Trump’s comment today is completely out of touch with the pro-life movement and even more with women who have chosen such a sad thing as abortion,” Jeanne Mancini, president of the March for Life Education and Defense Fund, said.

The Trump campaign quickly rolled out a statement that, if abortion were ever made illegal, “the doctor…would be held legally responsible, not the woman. The woman is a victim in this case, as is the life in her womb.”

But his campaign aides told Draper that Trump backtracked after he realized that he had set off massive public blowback and a media firestorm. He then turned to Governor Chris Christie, who had a staffer write the Trump campaign's retraction statement.

Despite the clarification, the business mogul struggled to communicate on abortion when speaking off-the-cuff, at one point saying, “The laws are set now” on the right to life. He went on to have the worst two weeks of his campaign, suffering negative media attacks and losing the Wisconsin primary to Senator Ted Cruz by 13 percentage points, a rare blowout loss.

After vanquishing Sen. Cruz, he again defended his answer as an “unbelievable” answer “from an academic standpoint.”

One pro-life leader says he isn't buying Trump's claim that he was talking about remorse as “punishment.” Gualberto Garcia Jones, vice president of Personhood Alliance, thinks it's another instance of the business mogul's willingness to twist the truth for political gain.

“Donald Trump has achieved what every showman must in order to be successful, and that is the suspension of disbelief,” Garcia Jones told LifeSiteNews. “While he did hesitate when asked about specific jail sentences, the context of the conversation was clear; when he agreed to some form of punishment for women who commit abortions he did not mean remorse.  To believe Trump's spin would be to suspend my critical faculties and I for one refuse to do so.”

The presumptive Republican nominee also said his position on Planned Parenthood, the nation's largest abortion provider, would do better in the general election than those of “a heavily conservative Republican.”

“Frankly, for the general election I think that’s a very good issue for me,” he told Draper.

Mr. Trump has called the billion-dollar organization “an abortion factory” and said he would defund Planned Parenthood unless it ceases performing abortions in any of its affiliates. But he has also said repeatedly that Planned Parenthood “does do wonderful things,” such as cancer screenings, a characterization that incensed pro-life conservatives.

Planned Parenthood performed 323,999 abortions in 2014, according to its latest annual report.

In his interview today, Trump sees his position as a middle-of-the-road compromise that will play well in swing states.

“Structurally, it’s very hard, almost impossible, for a heavily conservative Republican to win, because of the Electoral College,” he said.

He had previously bashed “so-called conservatives” for critiquing his position. “I'm a conservative,” he said on Super Tuesday, “but I'm a common sense conservative.”

Last month, Trump said he would “absolutely” change the Republican Party's platform to allow abortion for the “three exceptions” of rape, incest, or to save the life of the mother – something longtime conservative activist Richard Viguerie said seemed like “confirmation [for] those of us who opposed Trump.”

By contrast, Hillary Clinton supports taxpayer-funded abortion-on-demand, in the United States and worldwide – a position rejected by 70 percent of voters.

Donald Trump told the New York Times that his more centrist views will play well in blue states like Michigan, as well as possibly New York and Illinois.

“I’m going to be better to women on women’s issues than Hillary Clinton and everybody else combined,” he said.

The most recent Quinnipiac poll, released earlier this month, shows Donald Trump only one point behind Hillary Clinton in Pennsylvania, a state no Republican has won since 1988.

Seeking God’s forgiveness for abortion will do wonders in your life. Believe me, I’ve seen it.