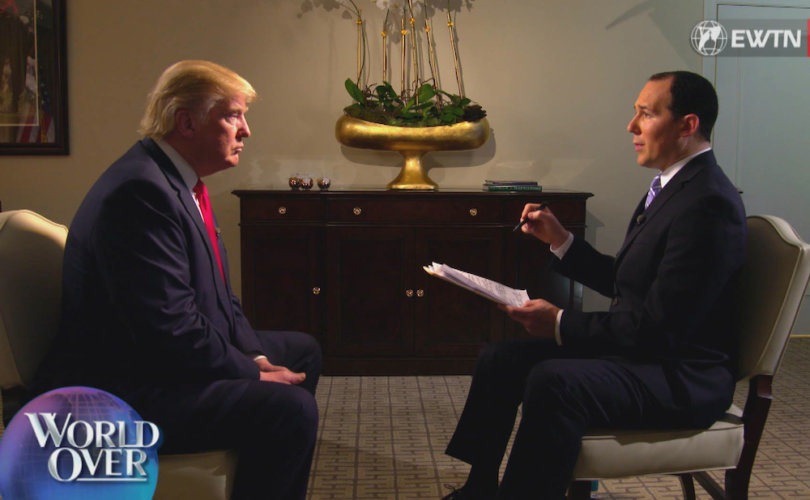 The GOP candidate sat down with the Catholic media network’s lead anchor and news director on his World Over program two weeks out from what likely has been the most contentious election in modern history, reiterating his pledge to appoint pro-life Supreme Court judges, uphold religious liberty, and repeal the Johnson Amendment.

Trump also identified with Arroyo the point when he had his change of heart on abortion.

And Trump told Arroyo were he Catholic, he could no longer associate with a fellow Catholic who voted for Democrat Hillary Clinton.

“Terrible,” is how Trump described the derogatory email conversations involving Clinton campaign Chairman John Podesta and Director of Communications Jennifer Palmieri, as Arroyo primed a question for Trump with specifics of the scandal.

“Now that’s her staff,” Arroyo said, asking Trump, “Is she guilty of that, should she apologize?”

“It’s her, yeah, it’s her,” Trump responded quietly as Arroyo concluded the question. “It’s her.”

“She should apologize, I think she has to do more than apologize,” Trump stated, before again stressing that Clinton’s staff reflects her stance. “No, that’s her thinking, that’s her staff.”

“Frankly if any Catholic votes for Hillary Clinton,” he continued, “you know, I would say if I were a Catholic I wouldn’t be talking to them anymore.”

In WikiLeaks email dumps from earlier this month, Clinton campaign staffers Podesta and Palmieri, both former presidents of the leftist Center for American Progress (CAP), and both Catholic, were shown engaged in email discussions with liberal activists where Catholicism is smeared as “severely backward,” and “a middle ages dictatorship,” and conservative Catholics’ beliefs are badmouthed as “an amazing bastardization of the faith.”

In the emails, CAP Senior Fellow John Halpin ridicules News Corp CEO Rupert Murdoch and Wall Street Journal Managing Editor Robert Thompson for raising their kids Catholic. Palmieri says conservative Catholics are attracted to the faith because “they think it is the most socially acceptable politically conservative religion,” and Podesta admits to actively working to provoke a liberal Catholic revolt against the U.S. Bishops.

The anti-Catholic statements by Clinton’s staffers do reflect on her, Trump told Arroyo in the interview that aired October 27, and she bears responsibility.

“She’s been terrible in what she’s said and her thoughts toward Catholics,” he said. “And to evangelicals, she was mocking evangelicals also.”

“But that’s her speaking,” Trump said. “Believe me.”

Arroyo clarified the anti-Catholic conversations were among her current staffers, and asked whether this regardless reveals a mindset in the administration.

“Well, it’s her staff,” Trump replied, “but I think it’s her, yeah, sure. I mean this is a top person in her campaign, I think it reveals her, yes.”

Catholics have called for an apology from Clinton, including New York Cardinal Timothy Dolan, and for her to fire Podesta. Philadelphia Archbishop Charles Chaput condemned the Clinton campaign as well for the “contemptuously ant-Catholic” emails.

Many polls suggest a tight race between Trump and Clinton, though crowd turnout at rallies for the respective campaigns indicates significant enthusiasm for the Trump-Pence ticket.

Arroyo pointed out that he has invited Hillary Clinton and Tim Kaine to appear on his program and remains in contact with them in the event either decides to take him up on the invitation.

He asked Trump in the interview about various allegations of sexual assault made toward him, along with lewd comments Trump made in 2005 caught by a hot microphone, both adding to questions of his regard for women.

Trump told Arroyo that the sexual assault charges were unfounded and had been debunked, and that the taped comments consisted of locker room talk that he has admitted to and for which he has apologized.

He also restated his position when asked that refugees entering the U.S. must be properly vetted to ensure Americans were not put at further risk of Islamic terrorism.

The Trump interview with Arroyo came as tensions remain high in a brutal campaign with lots of ugliness, including a testy dual appearance with the candidates last week at the Al Smith Catholic Charities fundraising dinner in New York, prompting a crescendo of past and present calls to end the tradition of political candidates speaking at the event.

Trump had reiterated his pro-life position and support for religious liberty at the dinner, stating in his concluding remarks that the opposing political camps could agree on “the need to stand up to anti-Catholic bias, to defend religious liberty, and to create a culture that celebrates life.”

Clinton did not acknowledge the anti-Catholic bias in her campaign staffers’ emails when she spoke before the Catholic crowd at the Al Smith dinner, instead invoking Pope Francis and running mate Kaine having been educated by Jesuits. Clinton also subtly reminded the Catholic crowd of her opposition to fundamental Church principles such as abortion by saying, “We need to get better at finding ways to disagree on matters of policy.”

Some have questioned Trump’s commitment to life, despite repeated strong commitments to appoint pro-life Supreme Court justices and Trump making the most fervent statements against abortion ever by a presidential candidate during the final presidential debate, with the business mogul having supported legal abortion in the past.

The issue was raised by Arroyo in the EWTN interview, when Arroyo asked Trump at what moment he’d had his pro-life conversion.

“Yes, I’m pro-life,” Trump said, then sharing that he’d known a couple with an unexpected pregnancy where there was strong disagreement between them.

“One wanted to abort and the other said, “We can’t do that, we’re not going to do that,” he recalled.

He explained that he has seen other examples, but this one stood out. Arroyo then queried whether the change of heart on life for Trump was a personal one, to which Trump agreed, saying many had made that personal change, including Ronald Reagan.

Asked about the Obamacare contraceptive mandate and religious liberty, Trump criticized the state of religious freedom in the U.S., decrying how people of faith are being persecuted.

He went on to share how he learned about the effects of the Johnson Amendment from pastors scared to speak for fear of losing their tax-exempt status and said repealing the Amendment would be the most important thing he would do for religion.

“Our pastors and ministers should have the right to go out and speak their minds,” Trump stated. “These are the people we respect and they’re actually precluded from speaking their mind.”

Arroyo wrapped up remarking that Trump had identified himself as the leader of a movement, and by asking the Republican nominee which issues the party will face as part of that movement, no matter the election’s outcome.

Trump listed Obamacare, jobs, rebuilding the military, support for veterans, the Second Amendment and a strong border, but the top issue, he said, is the Supreme Court.

Pro-life and family supporters recognize that not ceding balance in the high court is crucial for protecting life and religious liberty.

“There are many issues,” he said. “The biggest issue right now is the judges, Supreme Court judges.”

The Trump interview with Raymond Arroyo will be broadcast on EWTN again Sunday, October 30, at 7 p.m. EDT and again Monday, October 31 at 10 p.m. EDT. The interview is also available on YouTube.