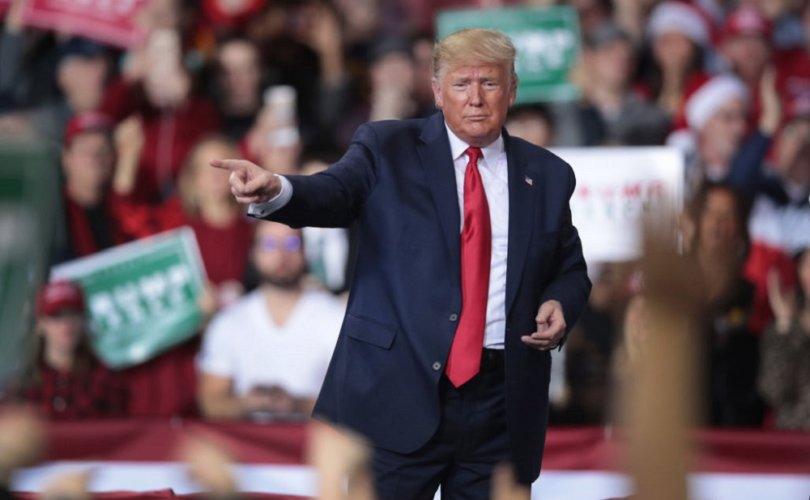 BATTLE CREEK, Michigan, December 20, 2019 (LifeSiteNews) — As the House of Representatives voted to impeach President Trump Wednesday night, the 45th president and other Republican politicians were busy talking about God and defending the unborn at his “Merry Christmas Rally” in southern Michigan.

Trump was visiting the historically blue state to gin up support for his re-election bid. Home to the famous “Reagan Democrat” vote, Michigan is a must-win for the president in 2020. Vice President Pence and former White House press secretary Sarah Sanders went on a bus tour there just last week. Trump himself visited the city of Grand Rapids in March to tout his innocence following the release of the Mueller report.

More than 5,400 people, almost 20% of whom were Democrats, packed themselves into Kellogg Arena, escaping frigid temperatures outdoors, where thousands more watched the rally on giant monitors. During his remarks, President Trump brought up what are now his most frequent talking points: rebuilding the military, growing the economy, border security, and health care.

He also spent time excoriating the “fake news” media and the impeachment effort, which he said is an attempt “to nullify the ballots of tens of millions of patriotic Americans.”

Trump kicked off the evening by praising “the miracle of Christmas, the greatness of America, and the glory of God.”

“Did you notice, everybody is saying ‘Merry Christmas’ again?!” he asked.

Later in the evening, the president blasted Democrats for their stance on abortion.

“Virtually every top Democrat also now supports late-term abortion, ripping babies straight from the mother’s womb right up until the moment of birth. That is why I’ve asked Congress to prohibit extreme late-term abortion because Republicans believe that every child is a sacred gift of God.”

“Faith and family, not government bureaucracy, are the true American way,” Trump declared.

Vice President Mike Pence, who spoke prior to Trump taking the stage, told the crowd that he “couldn’t be more proud to serve as vice president to a president who stands without apology for the sanctity of human life.”

Michigan GOP Senate candidate John James hit on similar themes during his remarks at the rally earlier in the evening.

After saying, “Happy birthday, Jesus,” James, a pro-life, 38-year-old African-American veteran and business-owner, explained that it’s nice to belong to a political party that doesn’t chase him off the stage for saying that.

“These political parties seem to have replaced our religion,” James said, according to MLive.com. “When you take God out of government, then the government tries to be God. There are certain things man can’t fix.”

“I’m running because I feel called,” he added. “The Lord has blessed me exceedingly, and I believe that he’s been blessing me to be a blessing to others.”

Jeremiah Bannister is a resident of nearby Grand Rapids who attended the rally with his wife. A former atheist turned Catholic, he previously worked for a pro-life, pro-family lobbying group in New Jersey.

He told LifeSite the rally was “electrifying,” especially in light of the impeachment vote, which he called “an electoral death wish.”

“The do-nothing Democrats have dug their own grave…betraying all sorts of congressional precedent and protocol. Even worse, impeachment was based on the hearsay and hunches of partisan hacks.”

Bannister, who hosts a talk show called Paleocrat Diaries and is now writing a book on his daughter’s life and death from childhood brain cancer, said he thinks Trump will probably win Michigan.

“He speaks their language, and he knows the pain we’ve endured from de-industrialization, outsourcing, and offshoring. Battle Creek experienced this firsthand! It used to be a booming blue-collar town. Trump wants to bring those jobs back!”

A poll conducted by a Republican political firm earlier this month found that Trump is beating all Democratic candidates in Michigan, Pennsylvania, and Wisconsin. Alex Conant, a partner at the group, said impeachment is likely the reason for the shift in support for the president.