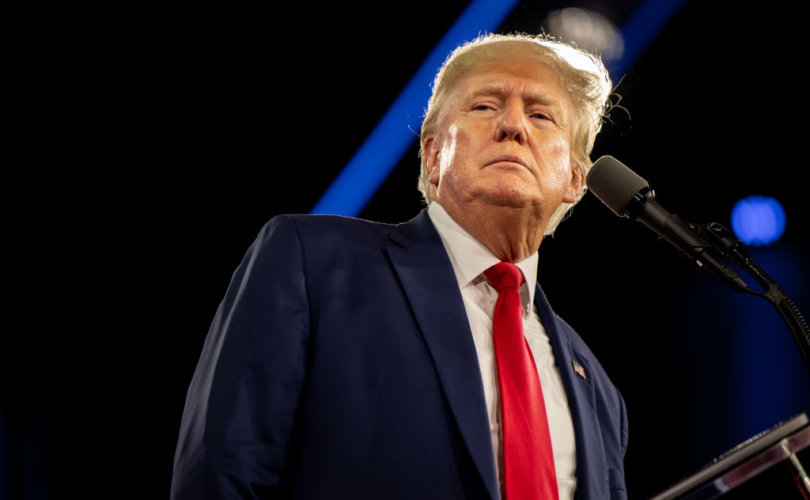 (LifeSiteNews) – Former President Donald Trump is under investigation for supposed violations of the Espionage Act and the obstruction of justice, it has been revealed, after a U.S. Magistrate Judge unsealed the warrant used by the FBI in its Monday raid of Trump’s Florida estate.

The warrant was unsealed by Judge Bruce Reinhart after the Department of Justice (DOJ) filed a motion to have the document released, and after Trump himself had called for “the immediate release of those documents, even though they have been drawn up by radical left Democrats and possible future political opponents.”

According to the 7-page file, the former commander-in-chief is being investigated for infractions against 18 U.S.C 793 for “gathering, transmitting or losing defense information,” 18 USC 2071 for “Concealment, removal or mutilation,” and 18 USC 1519 which lists “Destruction, alteration or falsification of records in Federal investigations.”

The penalty for such violations can include fines and a prison sentence of up to 20 years.

The warrant requested a full-scale search of Trump’s expansive Mar-a-Lago mansion, including all “58 bedrooms, 33 bathrooms, on a 17-acre estate.”

“The locations to be searched include the ‘45 Office,’” the document states, as well as “all storage rooms, and all other rooms or areas within the premises used or available to be used by FPOTUS [former President of the United States] and his staff and in which boxes or documents could be stored, including all structures or buildings on the estate.”

In addition, “[i]nformation, including communications in any form, regarding the retrieval, storage, or transmission of national defense information or classified material” were to be taken by the FBI during the Mar-a-Lago property raid, along with “[a]ny government and/or Presidential Records created between January 20, 2017, and January 20, 2021.

Finally, “[a]ny evidence of the knowing alteration, destruction, or concealment of any government and/or Presidential Records, or of any documents with classification markings” were also to be appropriated.

A judge officially granted the motion to unseal the FBI’s search warrant and receipts. Here are some highlights👇

A list of the documents seized from Mar-a-Lago: pic.twitter.com/hU9SNKnHKB

The FBI also seized records of the “Executive Grant of Clemency re: Roger Jason Stone Jr.,” “Info re: President of France,” two binders of photos, and a “handwritten note.”

In response, Trump spokesman Taylor Budowich accused the Biden administration of engaging in “obvious damage control after their botched raid where they seized the President’s picture books, a ‘hand written note,’ and declassified documents.”

Describing the event as “outrageous,’ Budowich said the “raid of President Trump’s home was not just unprecedented, but unnecessary – and they are leaking lies and innuendos to try to explain away the weaponization of government against their dominant political opponent.”

On Friday, Vice President Kamala Harris threw her support behind the unprecedented raid, stating her “full confidence” in the DOJ after the search warrant was unsealed while describing alleged attacks on law enforcement as “unacceptable.”

“As a former prosecutor, I will tell you, I don’t speak about anybody else’s case, but I have full confidence that the Department of Justice will do what the facts and the law requires,” Harris told reporters.

Regarding Trump’s criticism of law enforcement agencies, the vice president said that “they do very important work.” She added that Trump’s comments were “just highly irresponsible of anyone who calls themselves a leader and certainly anyone who represents the United States of America to engage in rhetoric for the sake of some political objective that can result in harm to law enforcement officers and agents.”

On Thursday, Attorney General Merrick Garland said that he had “personally approved” Monday’s search, adding that objections to the unprecedented raid amount to an unfair attack on the bureau.

Earlier on Friday, the former president mocked claims in The Washington Post that he was harboring “classified documents relating to nuclear weapons,” stating that the rumors are “a Hoax.”