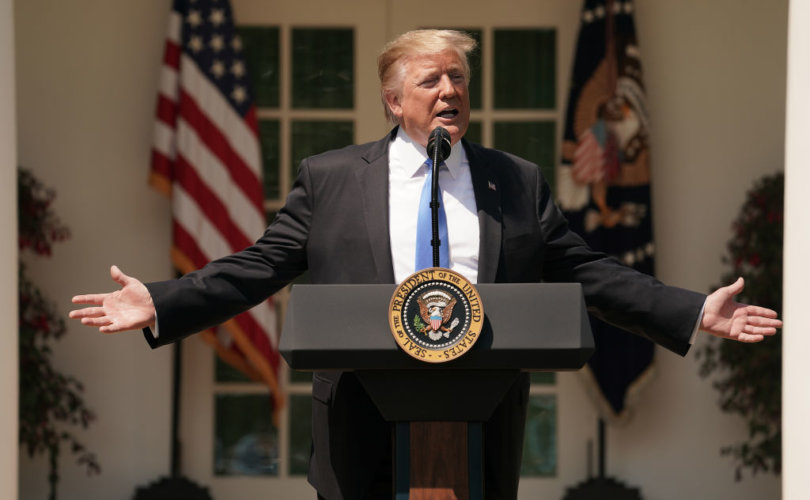 U.S. President Donald Trump delivers remarks during a National Day of Prayer service in the Rose Garden at the White House May 02, 2019 in Washington, D.C. Chip Somodevilla/Getty Images

WASHINGTON, D.C., May 2, 2019 (LifeSiteNews) – The Trump administration has finalized another set of administrative protections for religious Americans’ conscience rights on a range of fronts, President Donald Trump announced Thursday morning during remarks to observe the National Day of Prayer.

“Every citizen has the absolute right to live according to the teachings of their faith and the convictions of their heart,” Trump said during a ceremony in the White House’s Rose Garden. “This is the bedrock of American life. To protect this heritage, my administration has strongly defended religious liberty, two words you haven’t heard much about for a long period of time, but now you’re hearing it all the time, religious liberty.”

“Earlier this week I took action to ensure that federal employees can take paid time off to observe religious holy days,” he announced. “And just today we finalized new protections of conscience rights for physicians, pharmacists, nurses, teachers, students, and faith-based charities.”

According to a press release from the Department of Health and Human Services, the final rule “ensures that HHS implements the full set of tools appropriate for enforcing” laws that exempt healthcare workers from “having to provide, participate in, pay for, provide coverage of, or refer for, services such as abortion, sterilization, or assisted suicide.” It also “clarifies what covered entities need to do to comply with applicable conscience provisions,” “requires applicants for HHS federal financial assistance to provide assurances and certifications of compliance,” and “specifies compliance obligations for covered entities.”

“Finally, laws prohibiting government-funded discrimination against conscience and religious freedom will be enforced like every other civil rights law,” said Roger Severino, director of HHS’s Office for Civil Rights (OCR). “This rule ensures that healthcare entities and professionals won’t be bullied out of the health care field because they decline to participate in actions that violate their conscience, including the taking of human life. Protecting conscience and religious freedom not only fosters greater diversity in healthcare, it’s the law.”

Christian Medical Association Vice President for Government Relations Jonathan Imbody said in a statement that the new rule “reminds the government and the health community that we all live in a country that values freedom of conscience and tolerance of diverse views. Conscience freedoms protect liberals, conservatives and everyone in between, on issues ranging from capital punishment to abortion to research ethics.”

In the Rose Garden, Trump also spoke more generally about his administration’s support for life, liberty, and family.

“Together we’re building a culture that cherishes the dignity and worth of human life. Every child born and unborn is a sacred gift from God,” he said. “In addition, I am committing to you today that my administration will preserve the central role of faith-based adoption and foster care agencies to care for vulnerable children while following their deeply-held beliefs.”

The 45th president has made religious freedom a priority of his administration, from putting social conservatives like Severino and Vice President Mike Pence in top positions to lifting the Obama administration’s conscience mandate and establishing a White House office tasked with fielding the concerns of religious Americans and monitoring threats as they arise.