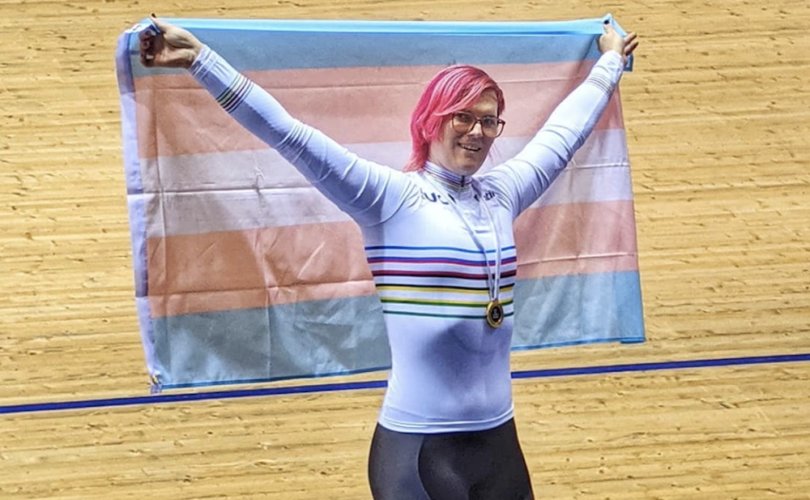 The Canadian-born McKinnon, who is also a philosophy professor on the faculty at South Carolina’s College of Charleston, first won the women’s sprint 35-39 age bracket last year, and won the gold again this weekend while setting a new best time.

“You can never be woke enough!” Trump Jr. quipped Monday in response. “Sorry to all female athletes who spent their lives mastering their games.”

You can never be woke enough! Sorry to all female athletes who spent their lives mastering their games.

McKinnon responded by suggesting the tweet “explains the explosion of hate messages I'm getting,” and discouraged his fans from engaging with critical tweets because doing so is “wasting your time and just clogging up my notifications.”

Oh THIS explains the explosion of hate messages I'm getting!! https://t.co/4DTjkb1suB

Babes. Seriously. I get hundreds and thousands of hate tweets a day.

STOP ARGUING WITH THEM.

You're wasting your time and just clogging up my notifications.

Trump Jr. was far from McKinnon’s only critic, however, with political pundits, athletes, and everyday readers alike commenting that biological male participation in athletic events meant for women undermines competition and ignores biological differences between the sexes:

I’ve not spoken to a single competing or retired elite athlete Male or female (as they understand how fractions of a second is the difference between medals or non) who think male biology should be in female sport. We need to find better solutions and RM needs to be less abusive

Make sure to put an asterisk by the record, since it was achieved via the physical benefits of male puberty.

The lack of feminist outrage over this issue leads me to believe that feminists aren’t REALLY all that serious about feminism https://t.co/DbQBr3Iqrt

This is really sad. All those (biologically born) women who trained for years for that moment. How can they possibly win against someone born biologically male? Rachel McKinnon says what about her rights? But what about theirs?https://t.co/iQ29jcF3LY

Why is McKinnon always so keen to force women to touch him? pic.twitter.com/0ctLmW904Y

In June, the Journal of Medical Ethics published a paper by researchers in New Zealand finding that “healthy young men (do) not lose significant muscle mass (or power) when their circulating testosterone levels were reduced to (below International Olympic Committee guidelines) for 20 weeks,” and “indirect effects of testosterone” on factors such as bone structure, lung volume, and heart size “will not be altered by hormone therapy;” therefore, “the advantage to transwomen (men) afforded by the (International Olympic Committee) guidelines is an intolerable unfairness.”

“The world record McKinnon set in the qualifying round was 11.649 for the female age 35-39 group,” Townhall’s Timothy Meads noted. “In the male 35-39 age group, the top qualifying round time was 10.498. In fact, if McKinnon had competed against these men instead of women, the Canadian's time would not have even finished in the top 10. McKinnon would have placed 11th, right behind Poland's Adrian Swiderski, who posted a time of 11.386. This means McKinnon would not have been allowed to compete in the men's sprint championship.”