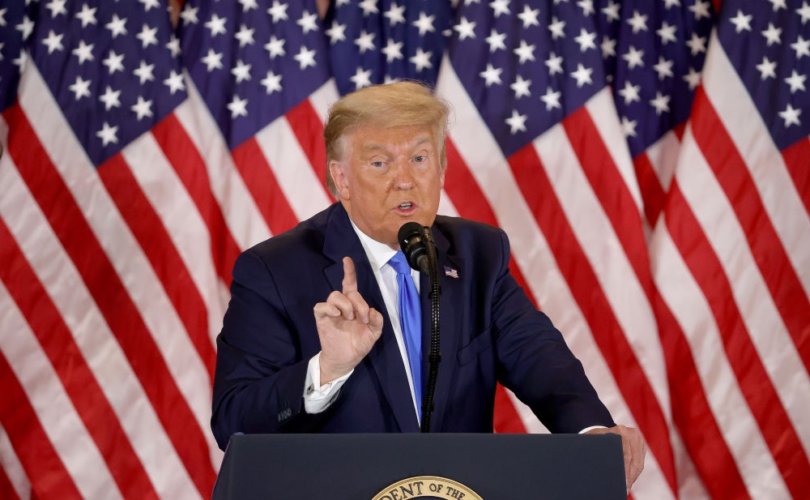 November 4, 2020 (LifeSiteNews) – President Donald Trump’s reelection campaign has announced that formal action is underway to prevent suspected cheating from altering the outcomes of the vote in Michigan and Pennsylvania.

“President Trump’s campaign has not been provided with meaningful access to numerous counting locations to observe the opening of ballots and the counting process, as guaranteed by Michigan law,” Trump campaign manager Bill Stepien said Wednesday in a statement. “We have filed suit today in the Michigan Court of Claims to halt counting until meaningful access has been granted. We also demand to review those ballots which were opened and counted while we did not have meaningful access. President Trump is committed to ensuring that all legal votes are counted in Michigan and everywhere else.”

Will not let Philly Democrat hacks steal it!

In Pennsylvania, Trump supporters have raised concerns over the state’s Supreme Court requiring ballots received up to three days after the election to be recognized even without a postmark, as well as cases of voters apparently registered to vote using the addresses of vacant lots rather than valid residences:

It's more narrow than just ballots received after Election Day — it's about post-Election Day ballots that don't even have a postmark.

Recall that the Pennsylvania Supreme Court banned state officials from using the lack of a postmark to invalidate late ballots. pic.twitter.com/ldCe76oj7A

.@PILFoundation has been warning about #PA for weeks – people voting from vacant lots. See the video where we visit the locations.@realDonaldTrump @DonaldJTrumpJr #Election2020 #PAElection #steelershttps://t.co/colCcJVj03

The president declared victory early Wednesday morning, accusing Democrats of perpetrating a “fraud on the American people” and vowing to go to the U.S. Supreme Court if necessary to stop a potential effort to steal the election.

The Trump campaign has already requested a recount in Wisconsin. While the presidential race remains incredibly close and will likely not be resolved without a drawn-out legal battle, conservatives have already taken solace in the fact that Republicans will likely retain control of the Senate, thereby blocking at least some of the designs of a potential Biden-Harris administration.