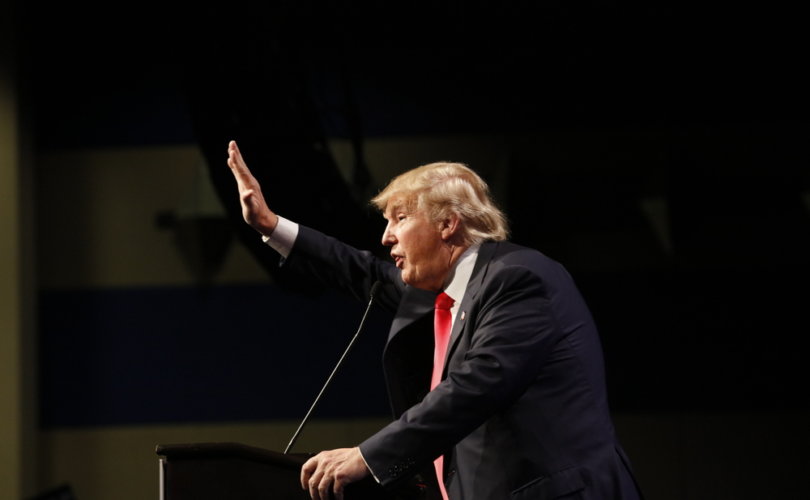 LifeSite journalist Lisa Bourne flew to New York from Iowa to participate in this meeting and this is her first-hand report.

NEW YORK, New York, June 21, 2016 (LifeSiteNews) – Over 1000 evangelical, pro-life and conservative leaders assembled for a closed-door meeting with Donald Trump Tuesday, ready to size up the presumptive GOP nominee and his commitment to issues of concern to faith-based voters.

Originally planned as a private gathering of 400 social conservatives, “A Conversation About America’s Future with Donald Trump” was organized by the Christian groups United in Purpose and My Faith Votes.

Attendees of the invitation-only event were treated to a mixed bag of answers from Trump and came away with varied reactions.

The event drew some 50,000 questions for Trump on topics such as religious freedom, homosexuality, abortion and Supreme Court appointees, submitted to organizers in advance.

Religious leaders heard responses to their liking from Trump in the areas of religious freedom and potential Supreme Court appointments, but some expressed concern afterwards that he didn’t say enough on the life issue, and appeared to skirt other matters, including directly addressing threats to religious liberty via the advance of the gay rights agenda.

Event leaders met with Trump privately before he took the stage for questions in the morning after introductory remarks from Doctor Ben Carson, Reverend Franklin Graham and Jerry Falwell, Jr. Former Arkansas Governor Mike Huckabee moderated the Q and A.

After Trump left the event, a panel of conservative and pro-life leaders took questions directly from the audience, allowing participants and leaders to voice their thoughts.

Religious freedom was the preeminent topic at the event. The 1954 Johnson Amendment forbidding churches from endorsing candidates – controversial for what many argue has been its chilling effect on the First Amendment – repeatedly surfaced throughout the day.

“The number one issue (among the tens of thousands submitted) was religious liberty, more than anything else,” said Dr. James Dobson, founder of Focus on the Family, while presenting the first pre-submitted question of the day – how a Trump administration would promote religious freedom and other freedoms in the Bill of Rights. “Because all the other issues relate to that one.”

“We’re losing, we’re losing our religious liberty,” Dobson stated, pointing out that Barack Obama, Hillary Clinton and other Democrats have stopped talking about freedom of religion and now speak only of freedom, with the goal of confining religion to within churches.

Trump responded that he was not surprised that religious liberty was the top concern for those gathered at the event.

He went on to say he would have an additional four to five possible nominees to add to the 11 potential nominees he’d already named, noting they’d all been vetted by the Federalist Society and others, while also warning of what Hillary Clinton would do with the Supreme Court vacancies.

“I think maybe it will be my greatest contribution to Christianity and other religions is to allow you to go have religious liberty, allow you to go and speak openly,” stated Trump. “And if you like somebody and you want somebody to represent you, you should have the right to do that.

Trump raised the Johnson Amendment even before the Q and A began, alluding to its repeal and saying the Amendment had taken a lot of power away from Christianity, with pastors “petrified” to talk openly about who they might support for fear of losing their tax exempt status.

“I’ve watched this through the last year,” Trump stated, “and I’ve watched fear in the hearts of brave, incredible people, and we are gonna get rid of that.”

And when First Liberty Institute’s Kelly Shackelford asked Trump about gay rights being used to undermine religious freedom, referencing the case of the Oregon owners of Sweet Cakes by Melissa, Trump replied that the issue would be settled by a court decision, and circled back to his list of potential Supreme Court nominees.

At the end of the Q and A, Huckabee thanked Trump for staying longer than originally planned, and Trump replied, “There’s nothing more important that this group of people.”

Trump’s responses yielded a combination of enthusiasm, skepticism and caution.

During the panel discussion, some observed that Trump will need to be held accountable for his promise to appoint pro-life and religious freedom Supreme Court justices. While that day’s event appeared to raise the comfort level for some with Trump, others indicated they weren’t quite there yet on the candidate, and that a lot more work needs to be done before the current evangelical support for Trump would translate into additional evangelical voter turnout.

A number of panelists commended Trump for agreeing to appear before the group and take questions.

“While he was here on this stage taking our questions long beyond the allotted time,” Faith and Freedom Coalition Chairman Ralph Reed said, “Friday before last, Hillary Clinton was at Planned Parenthood, receiving the embrace of the largest abortion provider in the western world, who endorsed her in the primary for the first time in its history.”

Reed said he didn’t want to be dismissive of the concerns and the reservations of others, “But for me based on that contrast, it’s really not a hard call.”

Susan B. Anthony List President Marjorie Dannenfelser said she would like to see Trump correct his sometimes-positive characterization of Planned Parenthood, and indicated she was following up with the campaign on that, along with the issue of his commitment to the 20-week fetal pain bill.

Live Action’s Lila Rose stressed the election’s importance with regard to Supreme Court appointments, but also said she would like to have heard more from Trump on life, while commending him for having said he would defund Planned Parenthood.

Pro-life activists will want to have more conversations with Trump on life in the coming weeks and months, Rose continued, who said she hopes to educate the Trump campaign on Planned Parenthood and abortion.

Perkins told participants their questions and comments would be communicated to the Trump campaign.

“This is the beginning of the conversation,” he said. “Not the end.”

Immediately after the meeting the Trump campaign announced a new evangelical executive advisory board, who will also lead a larger faith and cultural advisory committee, to be announced later in the month. Members were not asked to endorse Trump to be part of the board.

While it remains to be seen whether evangelicals and other Christians will get behind the Trump candidacy, the consensus at the end of the day was that Christians must unite and mobilize to exercise their substantive voting bloc, and conversations between them and Trump would continue over the months leading up to the election.