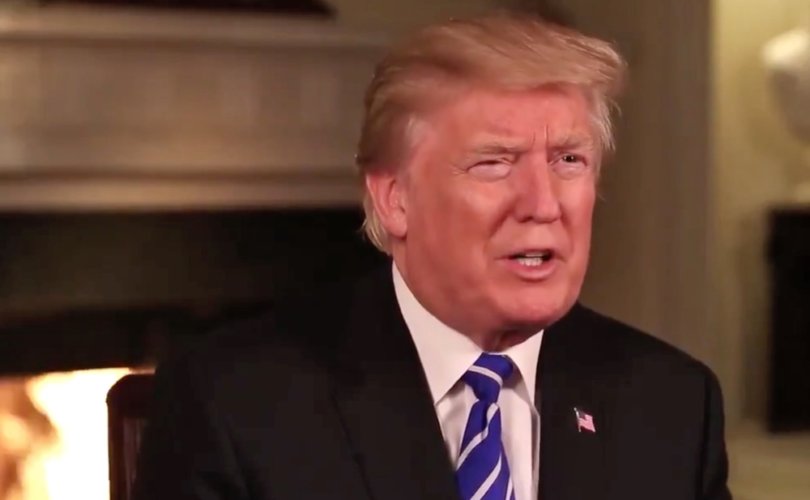 President Trump during his 2017 Thanksgiving address.

FLORIDA, November 23, 2017 (LifeSiteNews) — In his first-ever Thanksgiving address as President, Donald Trump mentioned God eight times, reversing former President Obama’s refusal to mention the name of God even once in his last Thanksgiving Proclamations as president in 2016.

President Trump in his address today thanked God for his providence and asking God to continue to bless the nation. He gave his address from his Mar-a-Lago Resort in Florida. A cheery crackling fire in the background set the thanksgiving mood.

Trump recounted how thanking God for his blessings and asking him for his continued blessing is part of the American way. He noted that when the pilgrims arrived in Plymouth almost four hundred years ago, their “first act was to pray.”

“On their first Thanksgiving, they came together to rejoice after their harvest and praise God for his provision. Since then, Americans have always remembered the blessings of freedom and the glory of God,” he said.

Trump said that George Washington, in his first year as president, “proclaimed a day of public thanksgiving and prayer. He asked all citizens to unite in sincere and humble thanks for God’s providence and the founding of our country.”

Trump mentioned how President Lincoln in the midst of the civil war made the last Thursday in November a national holiday, calling on Americans to “come together with one heart and one voice to thank God for his gracious gifts and to ask him to heal the wounds of the nation and to restore it.”

The president went on to thank all the “warriors” in uniform who have kept America safe. He thanked God for all those who have kept the nation safe.

“Together we give thanks for the loved ones who grace our lives and for the heroes who protect our nation. And we ask for God’s continued blessings on this magnificent land,” he said.

Trump’s explicit references to God comes as a stark contrast to his predecessor President Obama.

Obama made history in his first year in the White House in 2009 as the first president to omit directly thanking God in his Thanksgiving Proclamation, a trend he largely continued in his official proclamations during his remaining years in office.

Last year in his Thanksgiving address, then President-elect Trump also asked God to bless the nation.