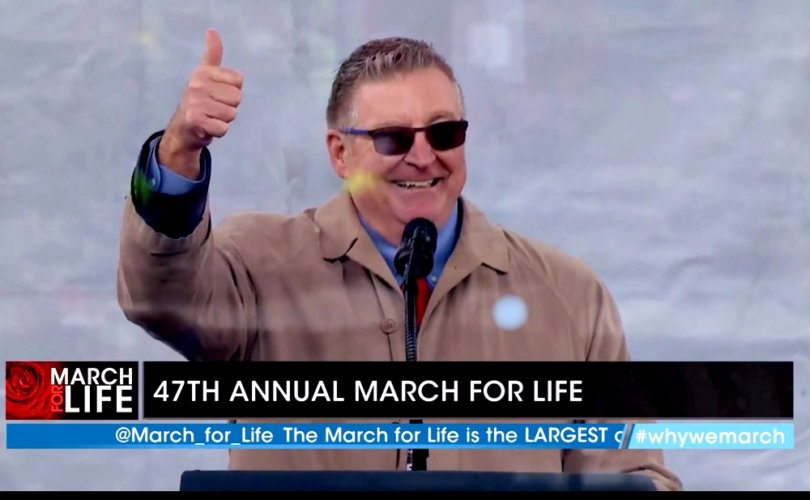 WASHINGTON, D.C., January 24, 2020 (LifeSiteNews) – Jim Daly, president and CEO of U.S. pro-family group Focus on the Family, told attendees of today’s March for Life rally in Washington that President Trump “is the most pro-life president we’ve ever had.”

Daly recalled being telephoned recently by a New York Times reporter who said “how can you Jim, as a Christian, support President Trump?”

Daly told the rally attendees that he responded to the question by asking the reporter: “did you ever ask that question of President Obama’s supporters? No, of course not.”

Trump had addressed the March for Life rally just moments before and Daly told the crowd “I think we just heard why we in the Christian, pro-life community support President Trump. He is the most pro-life president we have ever had. It’s great! It’s great!”

Trump became the first sitting president to address the March for Life in person, telling hundreds of thousands of pro-life marchers that he was “proud to stand with you” to “protect the right of every child, born and unborn, to fulfill their God-given potential.”

“All of us here today understand an eternal truth: every child is a precious and sacred gift from God,” Trump said. “Together we must cherish and defend the sanctity and dignity of human life. When we hold a newborn in our arms, we know the boundless love a child brings to a family.”

Trump’s appearance is the latest demonstration of his support for the pro-life cause, and a reminder of how far the former celebrity businessman has come since his conversion from conventional New York liberal to Republican political candidate.

This year, Trump declared January 22, the anniversary of the 1973 Roe v. Wade decision imposing abortion on demand across the country, to be “National Sanctity of Human Life Day.”

In a proclamation issued this week,  Trump declared that “every person — the born and unborn, the poor, the downcast, the disabled, the infirm, and the elderly — has inherent value” and said that the U.S. “proudly and strongly reaffirms our commitment to protect the precious gift of life at every stage, from conception to natural death.”

Daly also referred in his speech to an event held in Times Square, New York, last where a live 4-D ultrasound of Abby Johnson’s unborn child was displayed on giant screens in the square, where he claimed that a group of protestors from The Black Lives Matter group, had joined the pro-life event after hearing that “more black children were killed in New York City by Planned Parenthood, than were born last year.”

Daly also told the crowd about a new broadcast he has been working on with Abby Johnson and two other former Planned Parenthood employees. Daly told the crowd that the former Planned Parentood employees had been required to meet monthly quotas for abortion. “I want America to hear this”, he said. “Monthly quotas on the number of abortions! And by the twentieth of the month if they were down the women working in the clinic were told to accelerate getting women to abort their babies. Is that horrible? That’s why we stand in the pro-life movement, for the baby and for the woman.”