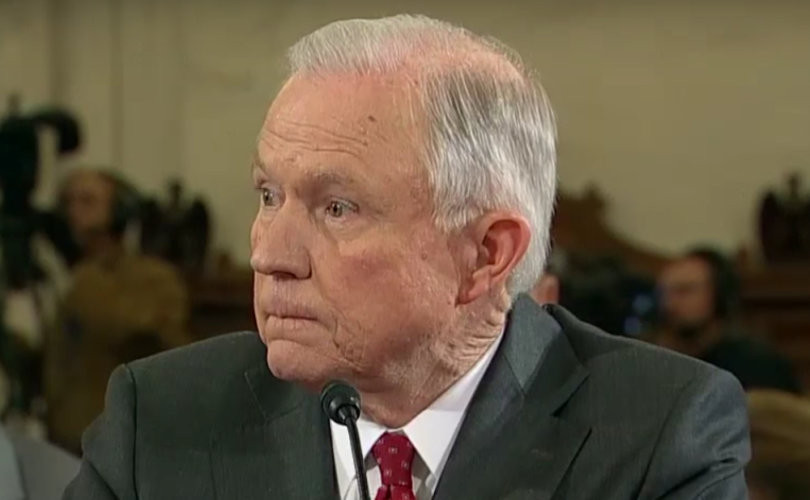 November 9, 2018 (LifeSiteNews) – With President Donald Trump firing embattled Attorney General Jeff Sessions the day after the 2018 midterm elections, speculation abounds as to who will be selected as his replacement.

Republicans lost the House of Representatives but strengthened their hold on the Senate Tuesday, giving Trump the votes he needs to confirm a successor. Sessions was a pro-life Alabama senator, one of candidate Trump’s earliest backers, and a foe of religious discrimination and transgender ideology. However, his relationship with the president soured over his handling of both the Russia investigation and scandals involving the previous administration.

Sessions’ chief of staff Matthew Whitaker will serve as Acting Attorney General until a permanent replacement is selected and confirmed, the president said Wednesday. Several Republicans are currently being considered for the job, with dramatically varying degrees of appeal to pro-life, pro-family Americans.

Kobach is a pro-life conservative who unsuccessfully ran for governor of Kansas this year, and Brown is a pro-life judicial originalist who was targeted by Democrat attacks when President George W. Bush appointed her to the D.C. Court of Appeals in 2005. Bondi is a vocal Trump supporter who fought her state’s judiciary to preserve Florida’s marriage protection amendment.

Giuliani, meanwhile, was a pro-abortion GOP presidential candidate in the 2008 primary who claimed Republicans had to “get beyond issues like” life. Christie, who rose to prominence on a brash-talking populist narrative similar to Trump’s yet lost to him in the 2016 GOP primary, was an ostensibly pro-life candidate who called for defunding Planned Parenthood but also endorsed abortion as “self-defense” in rape cases.

Senator Graham has recently endeared himself to conservatives with his impassioned defense of Supreme Court Justice Brett Kavanaugh and efforts to ban late-term abortions, though he has also agitated for rape exceptions in pro-life laws and bragged about his willingness to confirm Democrat presidents’ pro-abortion picks for judicial and executive vacancies.

Another option conservatives are increasingly warming to would be for Trump to let acting A.G. Whitaker take over the job permanently.

“Conservatives have many reasons to be optimistic about acting Attorney General Matt Whitaker,” Conservative Review’s Jordan Schachtel wrote Thursday, praising his willingness to “rein in” the “endless Russia probe, which has failed to produce a scintilla of evidence”; to potentially prosecute “untouchables” such as Hillary Clinton; and to continue the conservative policy work Sessions had been doing.

During a 2014 debate as an Iowa senate candidate, Whitaker argued that judicial nominees should “have a biblical view of justice,” whereas “if they have a secular worldview, where this is all we have here on Earth, then I’m going to be very concerned about that judge.”