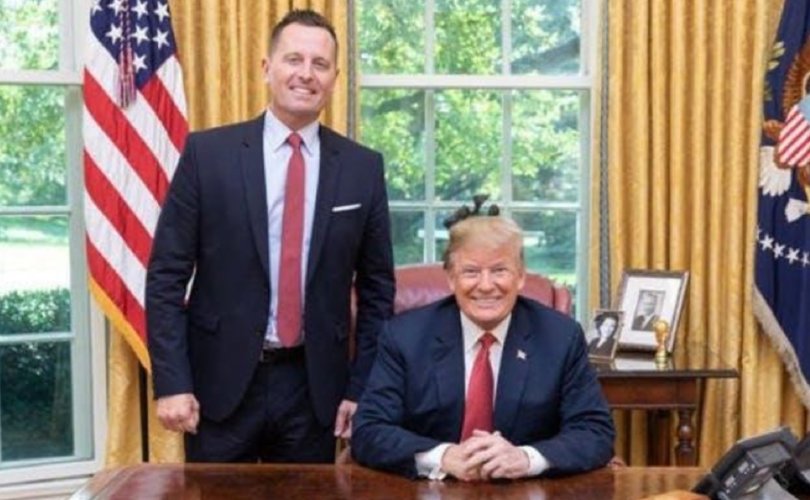 WASHINGTON, D.C., August 20, 2020 (LifeSiteNews) – President Donald Trump has embraced the message that he is “the most pro-gay president in American history,” after his former acting Director of National Intelligence (DNI) and Ambassador to Germany, self-identified homosexual Richard Grenell, made the claim in a viral new video ad.

Moreover, Grenell has just been tapped by the Republican National Committee (RNC) to serve as a senior adviser focused on outreach to LGBT voters, according to a Fox News report.

“My great honor!!!” exclaimed the President, reweeting Grenell’s declaration that “President Trump is the most pro-gay president in American history.”

Views of the video – which had already quickly gone viral – accelerated, topping 4 million in less than 30 hours and still going strong.

Initially it was unclear if the ad, sponsored by the pro-LGBT Log Cabin Republicans, had been approved by the Trump campaign. But now the president himself has given it his personal stamp of approval.

Trump’s very public affirmation of Grenell’s message combined with the RNC’s official creation of an outreach aimed at LGBT voters spearheaded by Grenell creates a conundrum for many conservative religious voters. Such voters have wholeheartedly praised the president for his many actions to protect the life of the unborn and defend religious liberty, but they reject the normalization of homosexuality in American culture.

The progressive LGBT political machine, which previously has been a wholly-owned subsidiary of the Democratic Party, has, along with the abortion industry, proven to be the greatest threat to religious liberty this nation has known in recent decades.

Wedding cake bakers, photographers, florists, and many others can attest to that.

The presence of LGBT political heft within the Republican Party may lead to a weakening of religious liberty while further normalizing homosexuality, same-sex marriage, and transgenderism – a direct affront to Christianity and other religions.

Grenell: ‘I can prove it’

“President Trump is the most pro-gay president in American history,” said Grenell at the outset of his video ad.

Grenell is a self-proclaimed conservative, Christian, pro-life, gay man who has often been the target of harsh criticism from LGBT commentators and mainstream media because of his beliefs. He has also proved to be one of President Trump’s most potent, trusted allies. Progressives generally dislike him and conservatives generally admire him.

Log Cabin Republicans says its purpose is to “to make the Republican Party more inclusive, particularly on LGBT issues,” which conservatives generally take to mean diluting and eventually eliminating the GOP’s traditional conservative stances on marriage, homosexuality, and transgender ideology. As such, the group is more aptly described as “Libertarian” rather than “Conservative.”

The organization challenged the military’s “Don’t Ask, Don’t Tell” policy against open homosexuality in the military and lobbied Republican lawmakers to vote to repeal the policy. It also welcomed the Supreme Court’s 2015 Obergefell v. Hodges decision instituting same-sex “marriage” across the United States.

In the just-released video, Grenell aligns himself with Log Cabin’s views, blasting Biden, who as a U.S. Senator supported “Don’t Ask, Don’t Tell” and the “Defense of Marriage Act.” Biden was also “against marriage equality.”

President Trump had previously indicated that he is “fine” with the Supreme Court’s opinion legalizing same-sex “marriage,” calling the matter “settled.”

Trump advisory board member Steve Mosher, an acclaimed author, speaker, and founder and head of the Population Research Institute, told LifeSiteNews that, overall, Trump is taking bold stands on the culture wars front.

“On the transgender front, since April 12, 2019, transgenders are not allowed to serve or enlist in the United States military. As far as the rest of the almost infinite number of aberrations found in our sex-crazed society, most cannot be solved by policies or presidents,” Mosher observed.

Despite Grenell’s claims that Trump is more pro-gay than Biden, the Democrats’ 2020 platform promises, among other things, to enact the far-left so-called Equality Act; guarantee boys can enter girls’ bathrooms and vice versa; and “ban harmful ‘conversion therapy’ practices.” It says “medically accurate, LGBTQ+ inclusive, age-appropriate sex education” is “essential” and boasts that Democrats “will work to ensure LGBTQ+ people are not discriminated against when seeking to adopt or foster children.”

President Trump is the most pro-gay president in American history. I can prove it.

As a U.S. senator, Biden supported “Don’t Ask, Don’t Tell” and the “Defense of Marriage Act.”

Biden voted to cut off federal funds to any school that teaches acceptance of homosexuality. Biden said again and again that he was against marriage equality.

This is why I believe we need President Trump in office for another 4 years. And I’m certainly not the only one.

They tell us our opinions don't’ matter because we don’t subscribe to their ‘group think.’ They try and bully us into silence.

But in my experience, proud gay people don’t like to be silent. They like to be loud.