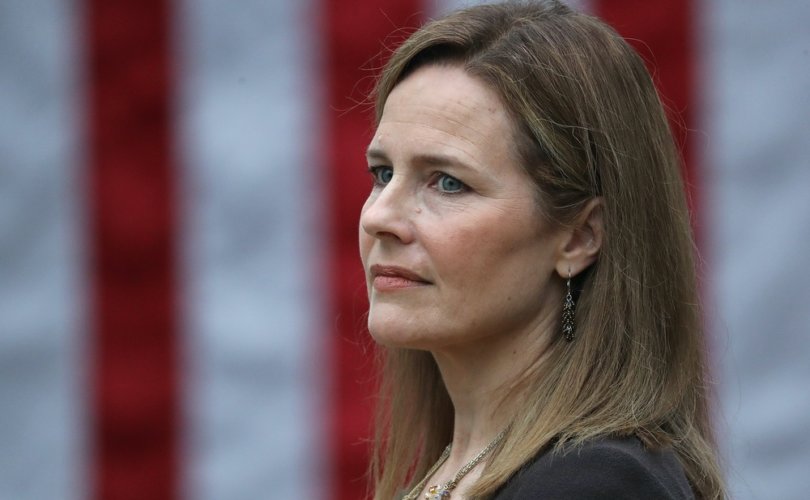 WASHINGTON, D.C., September 26, 2020 (LifeSiteNews) – President Donald Trump officially announced he intends to fill the open seat on the Supreme Court with pro-life Catholic Judge Amy Coney Barrett. If confirmed by the Senate, the 48-year-old will take the place of pro-abortion Justice Ruth Bader Ginsburg, who died on September 18.

Barrett joked that “I’m used to being in a group of nine: my family.” She spoke glowingly of her husband and seven children, two of whom are adopted. One of her children has Down syndrome.

“Our children are my greatest joy even though they deprive me of any reasonable amount of sleep,” Barrett joked.

“Should I be confirmed, I will be mindful of who came before me,” said Barrett, noting flags are still flying at half-staff for the late Justice Ruth Bader Ginsburg. Barrett said Ginsburg “not only broke glass ceilings, she smashed them.” Barrett said Ginsburg was “a woman of enormous talent and consequence” and that she found Ginsburg’s famed friendship with Justice Antonin Scalia – for whom Barrett clerked – “particularly poignant.” They “disagreed fiercely in print without rancor in person,” she noted.

Scalia’s “judicial philosophy is mine, too,” Barrett said.

“I stand before you today to fulfill one of my highest and most important duties,” said Trump. “It is a very proud moment indeed.”

Trump called Barrett “one of our nation’s most brilliant and gifted legal minds.”

“She is a woman of unparalled achievement, towering intellect, sterling credentials,” and commitment to the Constitution, he said.

“Her qualifications are unsurpassed, unsurpassed, and her record is beyond reproach,” Trump praised Barrett. “This should be a straightforward and prompt confirmation. Should be very easy. Good luck. It’s going to be very quick.

“I’m sure it’ll be extremely noncontroversial,” Trump joked. “We said that the last time, didn’t we?”

Barrett will be the first pro-life woman on the Supreme Court. She will also be the only woman with children serving as a Supreme Court Justice – and the first to serve while raising school-age children.

Sonia Sotomayor, nominated by President Barack Obama, is divorced and never had any children, while Elena Kagan, also an Obama nominee, never married.

For many years, Barrett taught law at the University of Notre Dame. She became famous when California Senator Dianne Feinstein asked Barrett about her Catholic faith during her confirmation hearing for the U.S. Court of Appeals for the Seventh Circuit in 2017.

“When you read your speeches, the conclusion one draws is that the dogma lives loudly within you,” Feinstein had said. “And that’s of concern when you come to big issues that large numbers of people have fought for, for years, in this country.”

Barrett is widely regarded as a pro-life originalist. She was a member of Notre Dame’s Faculty for Life group, signed a 2015 letter expressing “solidarity with our sisters in the developing world against what Pope Francis has described as ‘forms of ideological colonization which are out to destroy the family,’” and is reported to have signed another letter published by Becket Law criticizing the Obama administration’s contraception mandate.

Barrett has been under attack from Democrats and left-wing media since before Trump announced her as an official nominee.

Democratic campaign strategist Dana Houle tweeted, “I would love to know which adoption agency Amy Coney Barrett & her husband used to adopt the two children they brought here from Haiti.”

“So here’s a Q: Does the press even investigate details of Barrett’s adoptions from Haiti? Some adoptions from Haiti were legit. Many were sketchy as hell. And if the press learned they were unethical & maybe illegal adoptions, would they report it? Or not [because] it involves her children,” he added.

“Would it matter if her kids were scooped up by ultra-religious Americans, or Americans weren’t scrupulous intermediaries & the kids were taken when there was family in Haiti? I dunno. I think it does, but maybe it doesn’t, or shouldn’t.”

While the tweets were subsequently deleted, Missouri Senator Josh Hawley posted a screenshot, commenting, “Read this from Democrat activist & Hill staffer. Questioning whether #AmyConeyBarrett *illegally* adopted her children from Haiti, maybe snatching them from birth parents! This is the Dem gameplan. Nothing but raw bigotry and hate. I promise you, this will not stand.”

Read this from Democrat activist & Hill staffer. Questioning whether #AmyConeyBarrett *illegally* adopted her children from Haiti, maybe snatching them from birth parents! This is the Dem gameplan. Nothing but raw bigotry and hate. I promise you, this will not stand pic.twitter.com/JEMqhe05dY

With Amy Coney Barrett on the nation’s highest court, Trump would have nominated three of the nine Justices, the other two being Brett Kavanaugh and Neil Gorsuch.

Three of the justices are currently considered to be staunch liberals: Sotomayor and Kagan, as well as Stephen Breyer, who was nominated by President Bill Clinton.

All other Justices were nominated by Republican presidents. Chief Justice John Roberts is considered to be a swing vote, although he has repeatedly sided with the liberals, including in National Federation of Independent Business v. Sebelius, which essentially saved Obamacare in 2012.

Some conservatives have also voiced concern about Brett Kavanaugh’s strong emphasis of precedent, leading to speculation he might not overrule the 1973 decision in Roe v. Wade, legalizing abortion.

Neil Gorsuch disappointed conservatives when writing the majority opinion in Bostock v. Clayton County earlier this year, redefining the term “sex” in the 1964 Civil Rights Act to mean not simply “male” and “female” as biological facts, but also “sexual orientation” and “gender identity.

Speaking of Barrett’s upcoming confirmation hearings, Hammer tweeted yesterday, “This battle is going to make the Kavanaugh confirmation look like a cakewalk.”

“All of the Left’s political warfare that you will see over the next five weeks is about protecting the ‘right’ to snuff out unborn children from the womb,” he later specified. “All of it.”