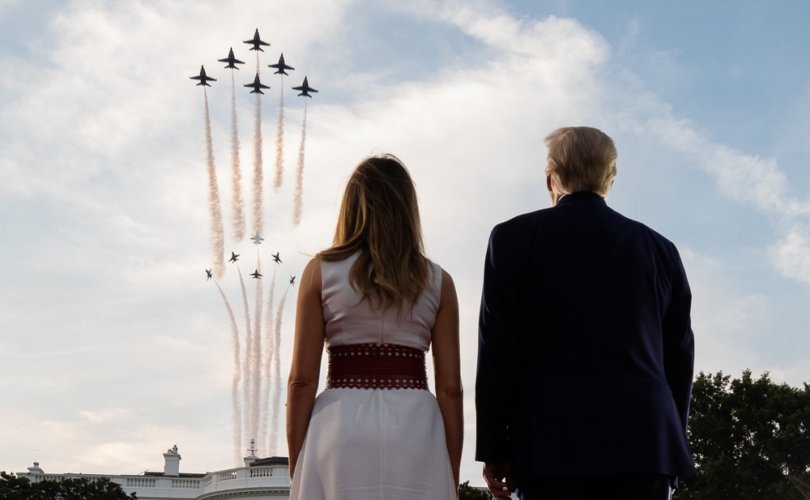 WASHINGTON, D.C., July 6, 2020 (LifeSiteNews) — President Donald J. Trump has signed an executive order calling for the building of a national park to honor American heroes, following weeks of the destruction and tearing down of statues and monuments in leftist riots around the country.

Trump signed the order on Friday July 3, before highlighting it in his speech at Mount Rushmore that day.

“I am announcing the creation of a new monument to the giants of our past. I am signing an executive order to establish the National Garden of American heroes, a vast outdoor park that will feature the statues of the greatest Americans to ever live,” Trump said at the foot of the iconic monument, which depicts George Washington, Thomas Jefferson, Theodore Roosevelt, and Abraham Lincoln.

“From this night and from this magnificent place let us go forward united in our purpose and rededicated in our resolve. We will raise the next generation of American patriots. We will write the next thrilling chapter of the American adventure. And we will teach our children to know that they live in a land of legends, that nothing can stop them and that no one can hold them down.”

The executive order “on Building and Rebuilding Monuments to American Heroes” decries the recent acts of vandalism and destruction and reflects on the significance of national monuments to the American people and the memory of their shared history.

“These statues are silent teachers in solid form of stone and metal. They preserve the memory of our American story and stir in us a spirit of responsibility for the chapters yet unwritten,” Trump’s order states.

“To destroy a monument is to desecrate our common inheritance,” he continues.

“In recent weeks, in the midst of protests across America, many monuments have been vandalized or destroyed. Some local governments have responded by taking their monuments down. Among others, monuments to Christopher Columbus, George Washington, Thomas Jefferson, Benjamin Franklin, Francis Scott Key, Ulysses S. Grant, leaders of the abolitionist movement, the first all-volunteer African-American regiment of the Union Army in the Civil War, and American soldiers killed in the First and Second World Wars have been vandalized, destroyed, or removed.”

Religious statues have also been increasingly being targeted in the violent protests that have swept across the country following the death of George Floyd. In Missouri, Catholics have been attacked while defending a statue of St. Louis IX, the thirteenth century King of France. Last week in Montana, a man used a pick-up truck to tear down a statue of the Ten Commandments.

Trump’s order specifically identifies Serra as an individual included in the phrase “historically significant American,” for whom statues in the National Garden may be commissioned.

“My Administration will not abide an assault on our collective national memory,” Trump wrote.

“In the face of such acts of destruction, it is our responsibility as Americans to stand strong against this violence, and to peacefully transmit our great national story to future generations through newly commissioned monuments to American heroes.”

Among those individuals specifically mentioned for whom statues should be commissioned are Susan B. Anthony, the nineteenth century suffragette whose name has been adopted by the pro-life group the Susan B. Anthony List; slavery abolitionist Harriet Tubman, who escaped from slavery before helping others do so; Antonin Scalia, the late pro-life Supreme Court Justice; and Billy Graham, the international Christian evangelist.

Trump’s order also insists that statues commissioned for the National Garden “shall be a lifelike or realistic representation of that person, not an abstract or modernist representation.”

“America owes its present greatness to its past sacrifices,” the order states.

“Because the past is always at risk of being forgotten, monuments will always be needed to honor those who came before.”