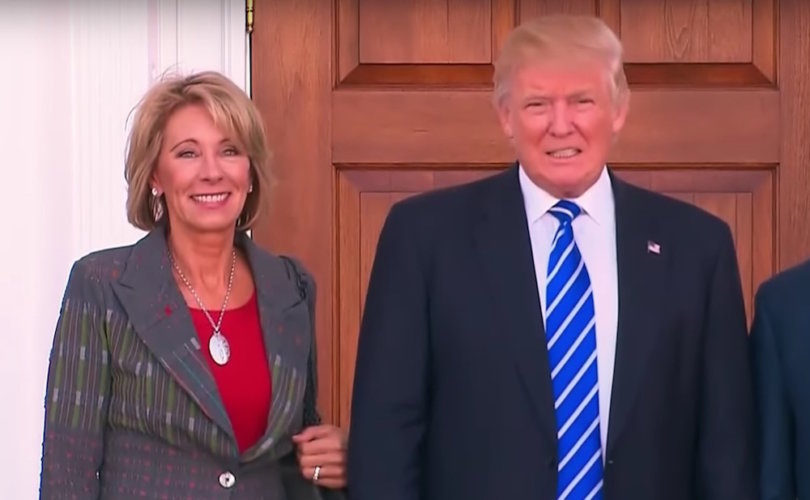 Some conservative foes of “Common Core” are disappointed in Trump’s choice, but DeVos claims she is against the federal education-standards law.

“Betsy DeVos is a brilliant and passionate education advocate,” said Trump in a statement. “Under her leadership we will reform the U.S. education system and break the bureaucracy that is holding our children back so that we can deliver world-class education and school choice to all families. I am pleased to nominate Betsy as Secretary of the Department of Education.”

DeVos, a 58-year-old Michigan native, said, “I am honored to accept this responsibility to work with the President-elect on his vision to make American education great again. The status quo in education is not acceptable. Together, we can work to make transformational change that ensures every student in America has the opportunity to fulfill his or her highest potential.”

As the Trump statement notes, Ms. DeVos is chairman of the American Federation for Children, whose mission is to “improve our nation’s K-12 education by advancing systemic and sustainable public policy that empowers parents, particularly those in low-income families, to choose the education they determine is best for their children.”

Betsy and Dick DeVos are the parents of four children and grandparents of five.

On Common Core, DeVos’ appointment disappoints conservative critics who have fought against the education law—which her new boss regularly blasted in debates and in his speeches.

Conservative Tribune’s Joy Pullman writes that DeVos is a “passionate advocate of Common Core” who “fails on two key promises Trump repeatedly made to voters: ‘Get rid of Common Core’ and ‘keep education local.’” Continues Pullman:

Hensley-Clancy writes that DeVos now claims to be against Common Core, of all things! That’s sure news to all the grassroots folks she pit her big money against during their legislative battles to reject Common Core. Grassroots folks report to me that DeVos’ husband personally called state senators in Michigan to get them to vote against a Common Core repeal bill. DeVos’ American Federation for Children also contributed huge sums of money for state school board races in Alabama on the side of Common Core supporters trying to oust Common Core opponents.

For her part, DeVos said that actually she is not in favor of Common Core:

I am not a supporter—period. I do support high standards, strong accountability, and local control. When Governors such as John Engler, Mike Huckabee, and Mike Pence were driving the conversation on voluntary high standards driven by local voices, it all made sense.

Have organizations that I have been a part of supported Common Core? Of course. But that’s not my position. Sometimes it’s not just students who need to do their homework. However, along the way, it got turned into a federalized boondoggle.

Other conservative leaders and school choice advocates are cheering the appointment. Jim DeMint, president of the conservative Heritage Foundation in Washington, D.C., said, “Betsy DeVos has been a staunch supporter of more education choices for students and parents, and the school choice movement will have a champion in the Education Department.”

“The next Secretary should re-evaluate existing federal education programs, work to downsize the agency, promote where appropriate efforts for more choice, and give states more flexibility with existing federal funds to better serve students,” DeMint said.

Home-school friend, opposite of Obama

DeVos on homeschooling: “another perfectly valid educational option. To the extent that home-schooling puts parents back in charge of their kids’ education, more power to them. . . . We think of the educational choice movement as involving many parts: vouchers and tax credits, certainly, but also virtual schools, magnet schools, homeschooling, and charter schools.”

King on homeschooling: “concerned” that home-schooled students not “getting the range of options that are good for all kids,” “not getting kind of the rapid instructional experience they would get in school,” “peers, teachers and mentors…difficult to achieve.”

A sea-change is coming at Education away from Obama’s political correctness—and what critics have called the Department’s outright “bullying” of school districts to force them to adhere to Obama’s politically correct LGBTQ mandates. The most infamous example of the latter is Obama’s “transgender school bathrooms” Executive Order—now likely doomed by a federal judge after being challenged by 13 states.

Social conservatives are thrilled—and their LGBTQ political opponents outraged—that DeVos, her husband and their family’s foundations have been major donors to organizations like National Organization for Marriage (NOM) as well as a successful Michigan campaign for a pro-traditional marriage amendment.