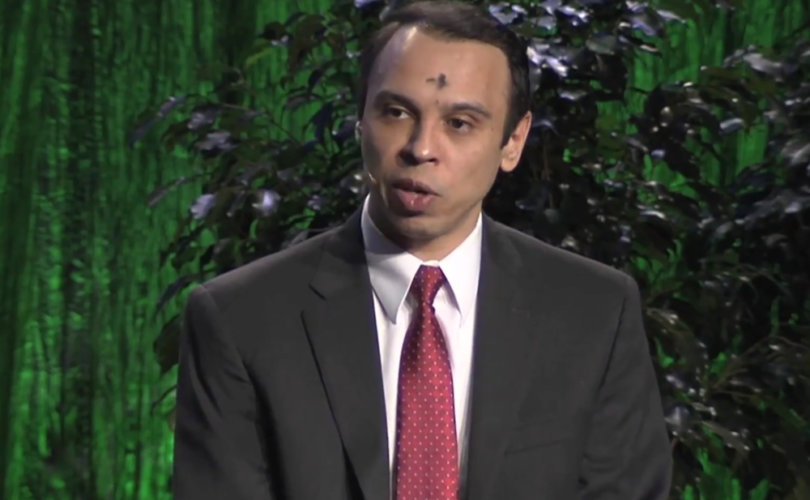 April 11, 2017 (LifeSiteNews) — President Trump has appointed social conservative Roger Severino to head the Office of Civil Rights of the Department of Health and Human Services (HHS) in a choice celebrated by pro-family advocates and condemned by pro-LGBTQ leftists.

Severino, a Harvard Law School graduate who served as director of the DeVos Center for Religion and Civil Society at the conservative Heritage Foundation, has written and published extensively against leftist “gender ideology” and the Obama administration’s promotion of transgenderism in the military.

His new boss at HHS is Tom Price, a conservative, pro-life former congressman from Georgia whose appointment, like Severino’s, has enraged pro-LGTBQ activists as well as the pro-abortion lobby.

Social conservatives were overjoyed at the appointment of Severino, who previously worked as CEO and legal counsel for the Becket Fund for Religious Liberty, one of the world’s premier legal organizations defending religious freedom.

“It’s a super appointment. Roger Severino is a very balanced thinker who is also an experienced litigator,” Ken Blackwell, formerly a senior domestic policy adviser on the Trump transition team, told LifeSiteNews. Blackwell, a former Ohio Secretary of State, served as undersecretary at the U.S. Department of Housing and Urban Development under President George W. Bush.

Currently Family Research Council’s senior fellow for human rights and constitutional governance, Blackwell said Severino is “associated with some of the best thinkers in the area of civil rights policy,” citing his experience with Becket, on whose Board Blackwell formerly served.

He said HHS Secretary Price is “building a team” and “has a game plan” to “attack the administrative state,” which includes dismantling the far-reaching tentacles of Obama’s pro-LGBT agenda across the federal government’s bureaucracy.

“With the appointment of Robert Severino as director of HHS’s Office of Civil Rights, President Trump demonstrates once again that he is only interested in what is best for the American people and not in politics as usual,” Diaz told LifeSiteNews. “Severino is an honorable man, respected by all who have had the pleasure of working with him. His keen intellect and full commitment to freedom and liberty make him the perfect choice for such an important position.”

If it is true that in politics (and life) a man is known by his enemies, then Severino is a very effective conservative and pro-family advocate. In a piece by the leftist group Think Progress, a big booster of Democratic Party causes, Ian Millhiser writes that with the HHS appointment, “Trump potentially gives Severino an opportunity to dismantle civil rights protections he criticized as a staffer at the conservative Heritage Foundation.”

“As the head of the HHS civil rights office, Severino will not only be able to push from within the department to dismantle existing protections for LGBT Americans, he could also potentially push for special rights for anti-LGBT employers and health providers — such as regulations explicitly permitting these employers and providers to engage in discrimination if they believe that their faith requires them to do so,” Millhiser writes.

The Human Rights Campaign (HRC), the world’s leading lobby group for homosexuality and transgenderism,” had an even harsher take on Severino.

“I could not think of a more dangerous person to head up the Office of Civil Rights at HHS,” said JoDee Winterhof, HRC’s senior vice president of policy and political affairs. “Once again, Donald Trump is declaring war against our community by appointing anti-LGBTQ people at all levels of his administration.”

“Mr. Severino takes pride in being a stark opponent of the LGBTQ community and has made it clear that his number one priority is to vilify and degrade us. We will fight tooth and nail against any attempts to roll back civil rights, including access to healthcare,” Winterhof said.

LGBTQ activists have a tendency to personalize public policy disagreements on homosexuality and transgenderism. LifeSiteNews could not find any examples of Severino “vilifying” homosexuals (or anyone), although he has spoken and written prodigiously and with articulation against LGBTQ ideology and policy goals.

Writing in 2007 as a Becket attorney for the Harvard Journal of Law, Severino explained in an article titled “How Same-Sex Marriage Threatens Religious Liberty” that, “Although it is difficult to predict with certainty the long-term effects of this profound change in the law, it is clear that the effects will be far‐reaching. The legal definition of marriage does not exist in isolation; changing it alters many areas of the law.

“For example, the definition of marriage plays an important role in the law of adoption, education, employee benefits, employment discrimination, government contracts and subsidies, taxation, tort law, and trusts and estates,” he wrote. “In turn, these legal regimes directly govern the ongoing daily operations of religious organizations of all stripes, including parishes, schools, temples, hospitals, orphanages, retreat centers, soup kitchens, and universities. Moreover, current law provides little room for non‐uniform definitions of  marriage within a state and even across states because of difficult  questions like child custody.”

That was long before homosexuality-based “marriage” was imposed nationwide by the Supreme Court.

Against transgender activism in military

“Some obvious questions arise from the new policy. Will biological males who identify as female be subject to physical fitness requirements for men or women? Will they be required to do 35 pushups or 13 pushups to pass basic training?” Severino wrote in the conservative Daily Signal. “Will American taxpayers be required to pay for expensive “sex reassignment” surgeries, including breast implants in men and shaving down Adam’s apples when that money can be spent on better weapons or more training?”

“Will service members who have addressed an officer as “sir” for years be booted out of the military if they refuse to address him as “ma’am?” he continued. “Wouldn’t the loss and impact on recruiting offset any supposed gains of allowing a relatively few transgender troops the ability to dress according to their chosen identity? These are but a few questions Carter neglected to address in his announcement.”

Severino fears that Section 1557 of the Affordable Care Act (Obamacare) will be used to make taxpayers pay for body-disfiguring “transgender” “sex reassignment surgeries.”

“Section 1557 … guarantees that no individual can be denied benefits in a health program that is either federally run or federally funded because of the individual’s membership in well-established categories of civil rights law, including race, color, national origin, sex, age, and disability,” he wrote.

According to his HHS bio, Severino “holds a J.D. from Harvard Law School, received a master’s degree in public policy, with highest distinction, from Carnegie Mellon University, and has a bachelor’s degree in business from the University of Southern California, where he was a National Merit Scholar.”