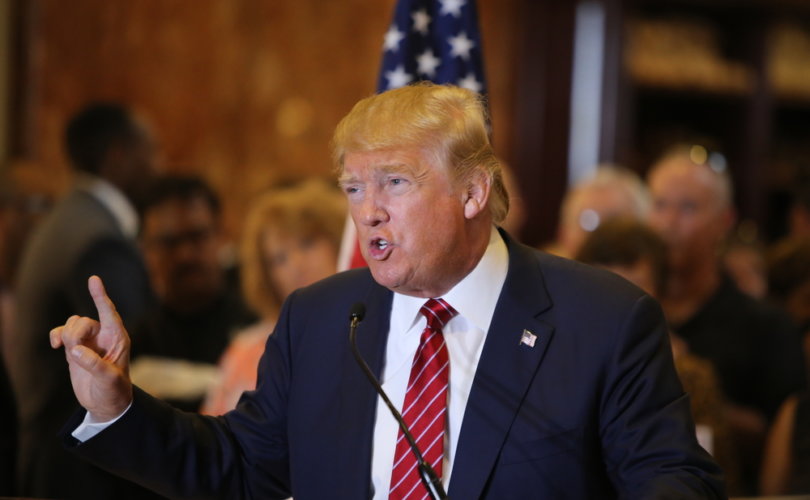 NEW YORK, June 16, 2016 (LifeSiteNews) – Donald Trump promised to go to bat for the LGBT community, announcing his support on the heels of Sunday’s mass terror shooting in an Orlando gay nightclub.

“Thank you to the LGBT community!” Trump tweeted. “I will fight for you while Hillary brings in more people that will threaten your freedoms and beliefs.”

The Orlando shooter, 29-year-old Omar Mateen, made phone calls and social media posts during the attack where he pledged allegiance to Isis, indicating among other evidence that homosexuals were the intended target of the terrorist act.

Varied groups have vied for control of the narrative in the days following the Orlando attack, attempting to advance such things as anti-Christian bias, gun control and increased approval for LGBT rights.

The presumptive GOP nominee’s expressed support to fight for LGBT people drew criticism, with The Daily Beast reporting that thousands of tweets in response signaled they weren’t buying it, and that “LGBT people despise him.”

Trump’s tweet in apparent favor of gay rights mirrored comments he made during a speech on Monday criticizing both the Orlando attack and Clinton.

“Ask yourself, who is really the friend of women and the LGBT community, Donald Trump with his actions, or Hillary Clinton with her words?” Trump stated. “Clinton wants to allow radical Islamic terrorists to pour into our country—they enslave women, and murder gays.”

Some homosexual members of the Republican Party welcomed the business mogul’s recent statements in support of LGBT individuals, saying his public backing is a game-changer for their cause, while also a warning to the GOP about its stance on LGBT issues.

“I believe we truly hit a tipping point in the LGBT equality movement in the United States in that for so long, you had Republicans reluctant to even mention the phrase ‘LGBT community’ and here we have our presumptive Republican presidential nominee not only using that phrase but directly expressing sympathy,” Gregory T. Angelo, president of the Log Cabin Republicans told Politico. “If Republicans try to position themselves as being justified in maintaining harsh anti-gay rhetoric in the platform … you better believe that Democrats are going to demonize them any chance they get.”

The attack on the Orlando Pulse nightclub could also be occasion for Trump to make the GOP more moderate, as well as persuade gay Americans to vote Republican in the November election, according to John Fluharty, an openly homosexual adviser to the Delaware Republican Party.

“Trump has a real opportunity to help expand the party by pushing Republicans to accept the reality of what happened in Orlando,” Fluharty said. “He can reset the clock for Republicans on LGBTQ issues if he’s willing to bring down the hammer on reactionary elements in the Party, and drive home the point that Orlando was not just an attack on America, but it was an attack aimed directly at American LGBTQ citizens …Republicans have to admit this reality and it needs to be reflected in the platform with language that supports ending discrimination and expanding equality.”

Trump’s stand on marriage protection and the LGBT agenda has been, like many of his positions, malleable during his campaign.

After months of expressing varied attitudes on how he would approach Supreme Court appointments, his list of judges for consideration for Supreme Court vacancies, released last month, received praise from some conservatives and was considered exceptionally strong by some in the pro-life community.

Trump has stated repeatedly that he supports traditional marriage, and he had criticized the June 2015 Obergefell Supreme Court decision redefining marriage at the time, but two months later he voiced approval for prohibiting companies from firing employees based upon sexual orientation, saying as well last August he’d attended a same-sex “wedding” and that conservatives should move on from the high court’s ruling.

Tuesday’s tweet was not the first instance where Trump suggested he supports special rights for homosexuals.

In the days leading up to this past February’s New Hampshire primary Trump told a television station there he would push “equality” for homosexuals further forward.

Conservative leaders have voiced sympathy and support for the Orlando terror victims and their loved ones from the outset, while also condemning the attack and reaffirming natural marriage.

“No one, straight or homosexual, should have to live in fear of being murdered in the street in America,” Richard Viguerie, chairman of ConservativeHQ.com, told LifeSiteNews. “So I think conservatives can and should oppose Islam's violent homophobia without buying into the larger gay political agenda, e.g. gay 'marriage'.”

At the same time they caution against reading too much into Trump’s LGBT tweet.

“We’re going to want him to clarify,” stated Bob Vander Plaats, president of The Family Leader, expressing hope this would be done next week when Trump meets privately with individual evangelical and conservative leaders from across the U.S. “I think to be fair, we have to ask him.”

Vander Plaats’ organization had encouraged prayer for the victims, families and friends after the Orlando terror attack, saying the wounded and dead were “precious souls,” who were bore the image of God and were therefore “worthy of dignity, value, and respect.”

Vander Plaats pointed to Trump’s penchant for communicating “in 140 characters or less,” and said that’s not where either issue can be adequately addressed.

There is still a lot of time left before the November election, he continued, but even so, clarification from Trump is in order.