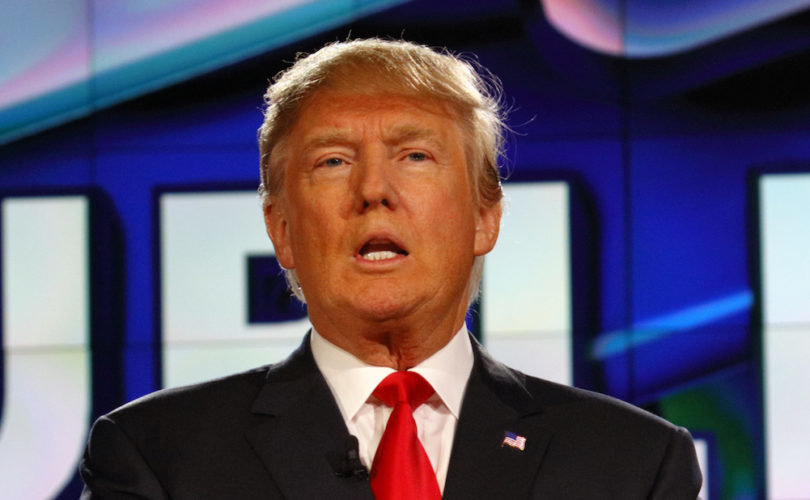 PALM BEACH, Florida, March 2, 2016 (LifeSiteNews) – In his Super Tuesday speech last night, Donald Trump reiterated his general support for Planned Parenthood, while still apparently holding to his promise to defund the organization so long as it continues committing abortions.

But the billionaire GOP presidential contender defended the abortion giant as though it were a champion of women.

“We'll see what happens,” Trump said, “but I've had thousands of letters from women that have been helped. This wasn't a set-up, this was people writing letters.”

Trump’s stated position on Planned Parenthood has been all over the place, but always hinging solely on the damage wrought by its abortion business, passing over the human body part trafficking scandal the abortion giant remains embroiled in, the radical teen sex programs it promotes, it’s racist leanings and targeting minority neighborhoods, pushing condoms to promote abortion and covering up for statutory rapists and sex traffickers.

In August of last year, only hours after saying he would consider continuing taxpayer funding of Planned Parenthood, Trump said he might withhold the half-a-billion dollar annual subsidy the abortion giant receives courtesy of American taxpayers if Planned Parenthood did not stop performing abortions altogether.

The next month the real estate mogul told Bill O’Reilly on his program The O’Reilly Factor he would defund Planned Parenthood unless it ended all abortions.

“I wouldn't do any funding as long as they're doing abortions,” Trump stated. “I would be totally opposed to funding.”

But the GOP frontrunner again praised the nation’s biggest abortion business during the February 13 Republican presidential debate when he said Planned Parenthood does wonderful things.

In a heated debate exchange with Senator Ted Cruz over the abortion giant, Trump raved that Planned Parenthood “does do wonderful things but not as it relates to abortion.”

Watch a video on Planned Parenthood’s promotion of a radical sexual agenda:

And in the GOP debate in Houston on February 25, Trump again defended the abortion giant, using their debunked talking point that abortions are only 3 percent of their activities. “I would defund it because of the abortion factor, which they say is 3 percent. I don’t know what percentage it is. They say it’s 3 percent,” Trump said.

After his Super Tuesday win of seven out of 11 states yesterday, the real estate tycoon agreed his position on Planned Parenthood was not conservative, but in its place, said he was conservative on other issues.

Regarding his position on Planned Parenthood, he said, “maybe that’s not a perfect conservative view, but I can tell you one thing, I’m more conservative than anybody on the military, on taking care of our vets, on the border, on the wall, on getting rid of Obamacare and coming up with something much, much better and certainly getting rid of Common Core.”

Trump took a swipe at conservatives at the press conference and ascribed his supportive stance of Planned Parenthood to his bluntness.

“Look, Planned Parenthood has done very good work for many, many — for millions of women,” Trump said. “And I’ll say it, and I know a lot of the so-called conservatives, they say that’s really … cause I’m a conservative, but I’m a common-sense conservative.”

“You can call it what you want,” Trump said, “but I am a truth teller, and I will tell the truth.”

This assertion was lost on at least one pro-life woman, at the same it was derided by a Planned Parenthood representative.

Tennessee Representative Marsha Blackburn was asked about Trump's defense of Planned Parenthood, and according to NewsMax she responded that he doesn’t realize the organization’s focus is its abortion business and not providing women's health services.

“I think Trump is speaking from what he knows,” Blackburn responded laughingly, “and maybe I need to go fill him in.”

Planned Parenthood itself was likewise not impressed by Trump's contention that he’d be good for women, saying in a statement that he had “built his presidential campaign on racism, misogyny and xenophobia.”

“Trump would ban abortion, and eliminate women's ability to have birth control covered by health insurance,” said Dawn Laguens, executive vice president of the Planned Parenthood Action Fund. “A Trump presidency would be a disaster for women.”

Slate: Planned Parenthood’s 3% figure is ‘the most meaningless abortion statistic ever’

This is what Planned Parenthood is telling our kids about sex. Be prepared to be disturbed.

Planned Parenthood at the nexus of evil and ignorance