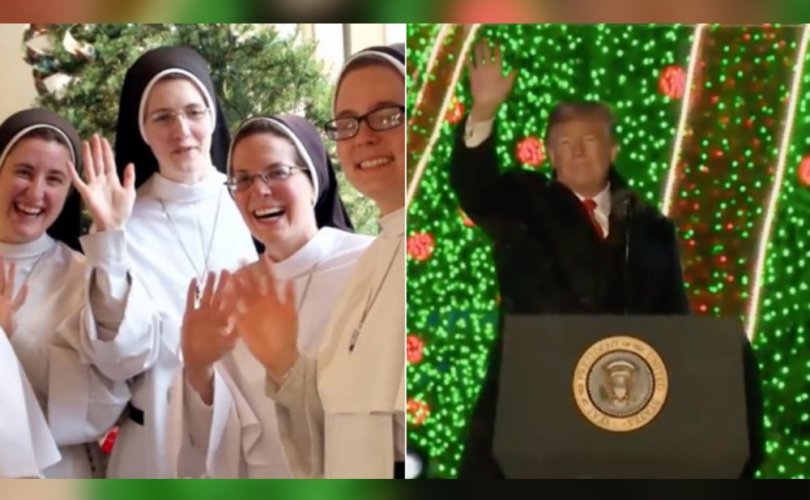 The Dominican Sisters of Mary, Mother of the Eucharist sang “Carol of the Bells” before a large crowd including President Trump and First Lady Melania Trump. The nuns were dressed in white habits and black coats; their long black veils fluttered in the November wind.

“Carol of the Bells” is featured on the most recent recording produced by the youthful order, Jesu, Joy of Man’s Desiring: Christmas with The Dominican Sisters of Mary. Bucking the trend of many orders of women religious, the 120 woman strong Ann Arbor Dominicans have 14 novices and welcomed 13 new postulants to their community this past August. The faithful sisters teach in Catholic schools around the U.S.

The tree lighting ceremony took place after 4:30 p.m. on Thursday at the Ellipse on President’s Park, just south of the White House. The tradition is an annual event, dating back 96 years. President Trump and Melania Trump appeared on stage to light the National Christmas Tree – Melania pushed the button – and to wish the crowd a “Merry Christmas.”

Trump was introduced as “the man who brought Christmas back to America.”

Although there were many performers, Trump singled out the Sisters in particular.

“That was a great job tonight,” he said. “And this included one very special group that has topped Billboard charts multiple times, the Dominican Sisters, who I met backstage, from Ann Arbor, Michigan.”

On November 27, the Sisters stated on their website that they were excited to bring “Christ to the Capitol.”

“As our four founding Sisters stepped out in faith 21 years ago to begin a new community of women religious, they envisioned spreading the witness of religious life across the country,” they wrote. “Indeed, God has affirmed their act of faith by providing abundant opportunities to fulfill that vision. In a spirit of thanksgiving, we are excited to bring ‘Christ to the Capitol’ as our Sisters sing selections from our latest CD, Jesu, Joy of Man’s Desiring, at the White House for the 96th Annual National Christmas Tree Lighting on November 28!”