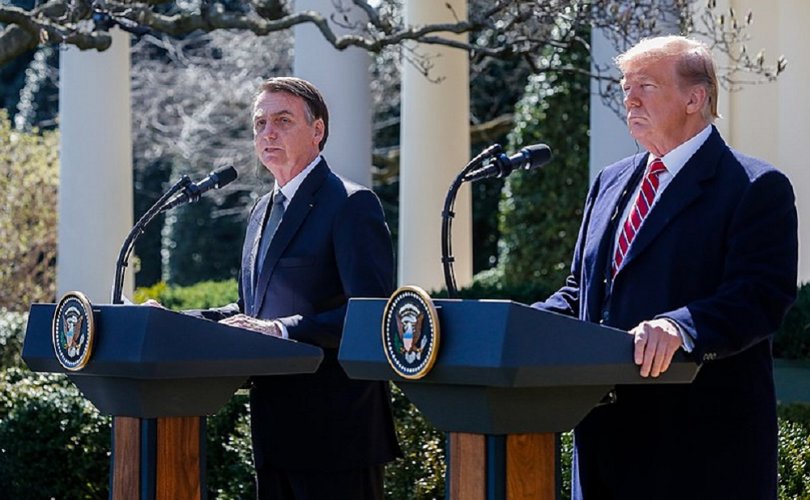 Trump hosted a visit by Brazil's new president, Jair Bolsonaro, to the White House, where they held a joint press conference in the Rose Garden.

Asked about proposals to increase the number of justices on the Supreme Court — advanced by a number of Democrats running for president, as well as former Attorney General Eric Holder — Trump said it was a strategy for a political party that can't win elections.

“If they can't catch up through the ballot box by winning an election, they want to try doing that in a different way,” Trump told reporters. “We would have no interest in that whatsoever. That will never happen. It won't happen. I guarantee you it won't happen for six years.”

The Senate has confirmed two Trump nominees to the Supreme Court, Neil Gorsuch and Brett Kavanaugh.

In his opening remarks at the press conference, the Brazilian president sought to express how similar he is to the American president. Bolsonaro, who took office on Jan. 1 and will turn 64 on Thursday, has been called “the Trump of the Tropics.”

“May I say that Brazil and the U.S. stand side by side in their efforts to ensure liberty and respect for traditional family lifestyles with respect to God, against the gender ideology, and against politically correct attitudes and against fake news,” Bolsonaro said.

Later in the press conference, Trump picked up the “fake news” theme when addressing social media companies and their suspected censorship of conservatives.

“But, you look at what's happening with the networks, you look at what's happening with different shows, and it's hard to believe we win. But I'll tell you what it really shows,” he continued. “The people are smart. The people get it. They'll go through all of that — whatever it is they're fed — and in the end, they pull the right lever. It's a very, very dangerous situation.”

Rep. Devin Nunes, R-Calif., announced Monday he was suing Twitter and some Twitter users for $250 million, claiming the platform was “shadow-banning conservatives.”

“Shadow banning” is a term used for blocking a user's content in a way that users wouldn't know they are being blocked. This can come through making content less visible or less prominent.

Trump said he could support a law to hold social media companies liable for what shows up on their platforms.

“I have many, many millions of followers on Twitter, and it's different than it used to be. Things are happening. Names are taken off. People aren't getting through. You've heard the same complaints,” the president said. “It seems to be, if they're conservatives, if they're Republicans, in a certain group, there is discrimination and big discrimination.”

I see it absolutely on Twitter and Facebook, which also I see. But I really focus on the one platform. I guess we have almost 60 million [followers] on Twitter. Maybe if you add them all up, it's way over 100 million people. I get to see firsthand what's going on, and it's not good.

We use the word 'collusion' very loosely all the time. I'll tell you there is collusion with respect to that, because something has to be going on when you get the back-office statements made by the executives at the various companies, and you see the level of — in many cases — hatred they have for a certain group of people that happen to be in power, that happen to have won the election.

You say that's really unfair. So, something is happening with those groups of folks that [are] running Facebook and Google and Twitter, and I do think we have to get to the bottom of it. It's collusive. It's very fair to say we have to do something about it.