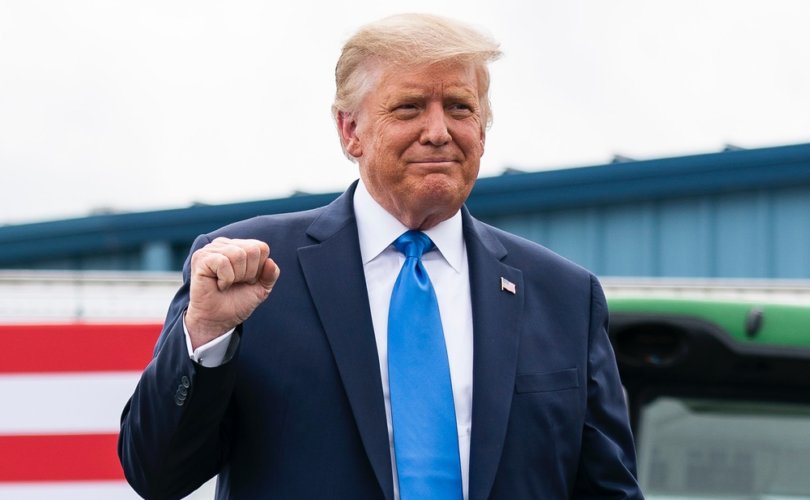 September 3, 2020 (LifeSiteNews) – President Donald Trump has formally identified what he intends to do for the preborn should he win a second term in office, following controversy over his campaign releasing a second-term agenda document that failed to mention abortion.

“As I seek re-election this November, I need your help in contrasting my bold pro-life leadership with Joe Biden’s abortion extremism,” Trump says in a letter to pro-life supporters.

“The Democratic Party unequivocally supports abortion-on-demand, up until the moment of birth, and even infanticide — leaving babies to die after failed abortions. Joe Biden’s embrace of this extreme position is most evidenced by his support for taxpayer funding of abortion on-demand. Forcing taxpayers to pay for abortions is an abhorrent position that must be defeated at the ballot box. Joe Biden has doubled down on these positions with his selection of abortion extremist Kamala Harris as his running mate.”

Specifically, Trump pledges to “continue our transformation of the federal judiciary” via conservative Supreme Court appointees, to “overcome Democratic filibusters in Congress to finally pass and sign into law” legislation banning late-term abortion and taxpayer funding of abortion, and strengthening protections for infants born alive after failed abortions; and to “fully defund the big abortion industry such as Planned Parenthood of our tax dollars.”

Trump consistently governed as a pro-lifer in his first term, and there was little doubt that a potential second term would bring more of the same. However, the Trump campaign came under fire last month for releasing a second-term agenda that failed to reference the preborn at all among his list of priorities.

Out of @TeamTrump’s 50 “core priorities and goals” why isn’t a single one the protection of preborn children or stopping the abortion industry from killing 2300 innocent children every day? https://t.co/QHxSMjfaec

Days later, the campaign quietly added a “Defending American Values” section to the agenda document, which pledges to “continue nominating constitutionalist Supreme Court and lower court judges”; “protect unborn life through every means available”; and “defend the freedoms of religious believers and organizations.”

The unforced error notwithstanding, the November election presents a stark choice for pro-life Americans. Trump’s Democrat opponent, former Vice President Joe Biden, is campaigning on a plan to enshrine effectively unlimited abortion on demand into federal law, at taxpayer expense, and even to use the federal Justice Department to tie the hands of states that try to enact any pro-life restrictions.

House Democrats are also reportedly planning to demand that spending bills no longer include the pro-life Hyde Amendment beginning next year, which would allow direct federal funding of elective abortions. Whether they ultimately succeed will depend on who controls Congress and the White House next year.