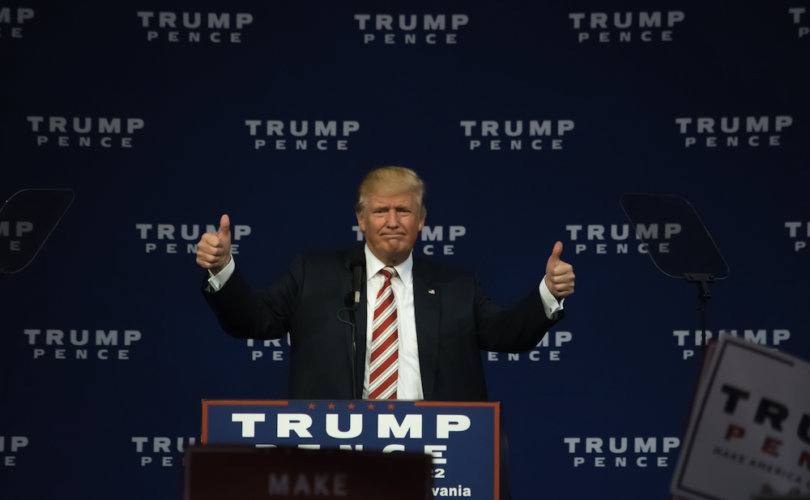 The Trump administration released a statement confirming President Trump would sign the Pain-Capable Unborn Child Protection Act if it reached his desk in its current form.

“The United States is currently out of the mainstream in the family of nations, in which only seven out of 198 nations allow elective abortions after 20 weeks of pregnancy,” it said.

The U.S. House is voting on the bill, which bans most abortions after 20 weeks – halfway through pregnancy – today. It’s not expected to pass the U.S. Senate, where it needs 60 votes.

The Trump administration “applauds the House of Representatives for continuing its efforts to secure critical pro-life protections,” the statement said. “The bill, if enacted into law, would help to facilitate the culture of life to which our Nation aspires.”

It would “promote a science-based approach to unborn life, as recent advancements have revealed that the physical structures necessary to experience pain are developed within 20 weeks of fertilization.”

“If H.R. 36 were presented to the President in its current form, his advisers would recommend that he sign the bill into law,” the administration’s statement said.

“We have an obligation to speak and defend for those who can’t speak for themselves,” House Majority Leader Sen. Kevin McCarthy, R-California, said upon announcing the October 3 vote. “I welcome every member of the House and the Senate to unite together and say that when children can feel pain, when you can see their noses and ears, when you can hear their heartbeats and feel their movement — at the very least we can all agree these children should be protected.”

“We are grateful to President Trump, Leader McCarthy, and our pro-life allies in the House of Representatives for championing this compassionate, popular bill,” said Marjorie Dannenfelser, president of the Susan B. Anthony List, one of the pro-life groups pushing hardest for the bill. “We urge Congress to pass it swiftly … It’s past time for Congress to pass a nationwide law protecting unborn children from the unspeakable cruelty of late-term abortion.”

Signing this law was one of Trump’s pro-life campaign promises.