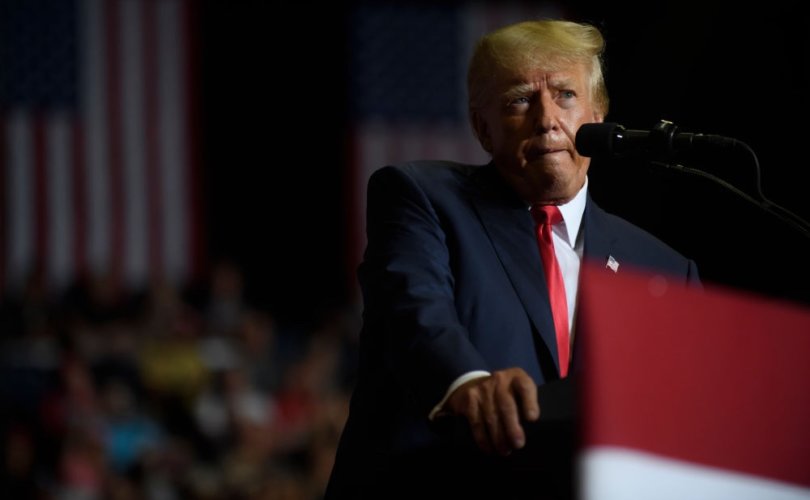 Former President Donald Trump speaks at a Save America Rally to support Republican candidates running for state and federal offices in the state at the Covelli Centre on September 17, 2022 in Youngstown, Ohio. Photo by Jeff Swensen/Getty Images

LATROBE, Pennsylvania (LifeSiteNews) — Former President Donald Trump has ruffled the feathers of more than a few conservatives for taking a swipe at Republican Florida Governor Ron DeSantis this past weekend, fueling speculation that he is closing in on an announcement for the Oval Office.

During a campaign stop in Latrobe, Pennsylvania Saturday night, Trump referred to DeSantis as “Ron DeSanctimonious” while reading from a list of potential GOP nominees for president in 2024.

While looking at one of the giant monitors at the rally, Trump said, “There it is, Trump at 71%, Ron DeSanctimonious at 10%. Mike Pence at 7, oh, Mike’s doing better than I thought.” It is not clear where Trump had obtained the data.

Trump was in Pennsylvania rallying voters for pro-abortion, pro-LGBT U.S. Senate candidate Dr. Mehmet Oz, who has been linked to the globalist World Economic Forum.

Oz beat Kathy Barnette, a pro-life black woman conceived in rape, during the GOP primary thanks to Trump’s endorsement. Barnette was touted by grassroots supporters as the real MAGA candidate in the race.

Also, nice job launching your public attack against the most popular conservative governor in America three days before the midterms when we’re all supposed to be showing a united front

Author and blogger Rod Dreher, who writes for The American Conservative, called Trump an “idiot” for his remarks. Others suggested the DeSantis nickname needed work, and that it was a far cry from the ones Trump gave his political opponents in 2016.

Mike Pompeo tweeted support for DeSantis as well. Pompeo served as Trump’s CIA Director and Secretary of State and has said he may run for president in 2024. Trump recently said that it would be “very disloyal” for cabinet members to compete against him should he decide to seek re-election.

Writer and former Daily Caller reporter Scott Greer mocked Trump’s critics, tweeting that they would end up voting for him anyway.

For months, DeSantis allies have insisted their champion doesn’t need Trump’s support and tweeted about Trump like a jilted lover. One quip from Trump isn’t that big of a deal https://t.co/z68gj4VzKa

Just one day after belittling DeSantis, Trump appeared at the Miami-Dade fairgrounds for GOP Florida Senator Marco Rubio. Instead of repeating the “DeSanctimonious” label, he simply told the crowd that they need to turn out to the polls on election day, a potential nod to his critics that he understood their concerns.

Real Clear Politics polling indicates that DeSantis, who was not at the rally, is comfortably ahead of Democrat challenger Charlie Crist for the governorship. During a debate with Crist last month, DeSantis refused to say if he was going to run for president in 2024.