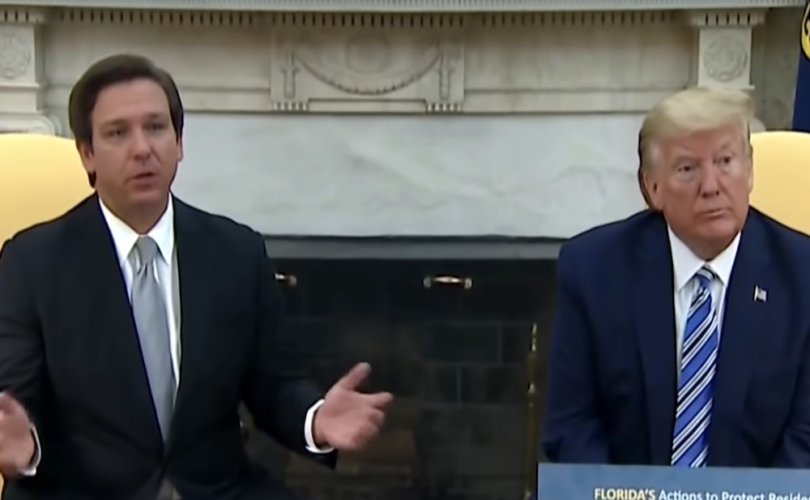 (LifeSiteNews) – Former President Donald Trump retains a claim to the title of frontrunner in the Republican primary for the 2024 presidential nomination, according to recent national polls.

Those same polls place his closest presumptive competitor, Florida Republican Gov. Ron DeSantis, at 30%, 24%, and 29%, respectively. DeSantis averages 30.8% according to RCP. Trump tops DeSantis in all nine of the latest national polls including the two men currently listed by FiveThirtyEight.

When it comes to who voters would choose today in a direct contest against President Joe Biden, however, the situation is more complicated.

The national polls suggest a swing back in Trump’s direction after national polls consistently showed DeSantis in the lead from November 9 (right after the midterm congressional elections) through December 20.

The DeSantis surge came amid finger-pointing over who was to blame for Republicans’ underperformance in the midterms, the former president launching unprovoked personal attacks on the popular conservative governor, and generating consternation by holding a dinner meeting with internet provocateur Nick Fuentes and iconoclastic rapper Kanye “Ye” West, both of whom have become known for anti-Semitic public statements.

Trump and his supporters have touted the latest primary polls as proof that their candidate’s enduring bond with his core supporters cannot be shaken by momentary controversies, and that it would be futile for anyone to challenge him for the nomination. Skeptics of another Trump bid point to his losing to Biden in general election matchups, and question how he intends to more effectively counteract the vote fraud he insists robbed him of rightful victory in 2020. As followers and participants in online debates can attest, Trump enjoys one of the most passionately loyal fan bases in all of politics; the question is whether he can add enough voters on top of them to win the general election.

As for DeSantis, who has not confirmed he is running yet or responded to any of Trump’s attacks, supporters argue his position in the national polls is a function of his limited name recognition outside Florida, which they say will change once he starts campaigning, as evidenced by his gubernatorial reelection expanding his margin of support from a 30,000-vote, 0.4% margin of victory in 2018 to a 1.5 million-vote, 19.4% margin in 2022, including significant inroads among Democrat strongholds and demographic groups traditionally unfriendly to Republicans.

DeSantis enjoys consistently higher personal favorability ratings among the general public (+7) than Biden (-10.1) or Trump (-21.1) according to RCP. Impact Social, which analyzes online and social media discussion, finds that DeSantis has a net negative sentiment of two points among swing voters while Trump has a net negative sentiment of 44 points among that same group.

Unanswered questions key to the eventual outcome include how a majority of primary voters will weigh their personal feelings about the candidates against perceived electability, and how many other Republicans will split the non-Trump vote with their own candidacies.

Two issues sure to play a significant role in the decision: the COVID-19 vaccines, which Trump stands by while DeSantis is positioning himself on the opposite side, and abortion, on which both men have pro-life records. But many are waiting for DeSantis to go further than Florida’s 15-week ban, and Trump angered pro-lifers this month by blaming the GOP’s disappointing midterm performance in part on no-exceptions candidates and pro-life activists supposedly having “just plain disappeared.”

A non-scientific straw poll held at Students for Life’s recent annual conference found that among approximately 2,000 pro-life attendees, 53.73% prefer DeSantis for president compared to 19.22% for Trump.