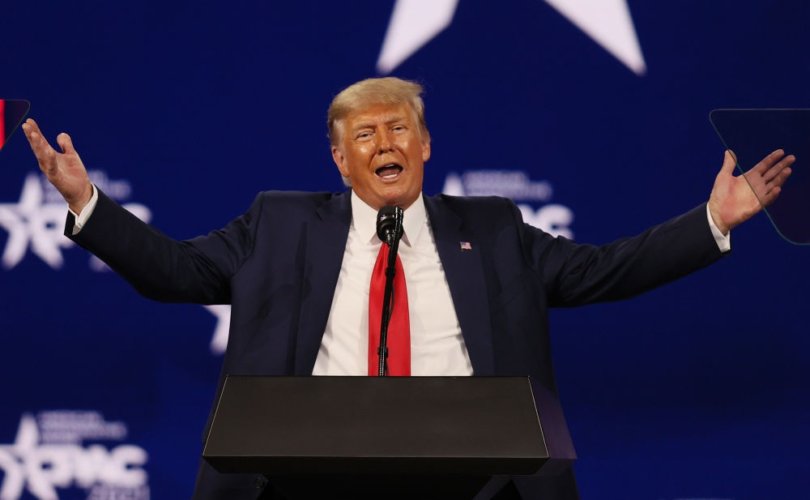 (LifeSiteNews) — Former U.S. President Donald Trump has denied and mocked the claim that the FBI’s Monday raid on his Florida home was launched in a bid to recover classified documents concerning nuclear weapons.

The Washington Post made the accusation in a Thursday report, citing unnamed sources who declined to provide details backing up their claims. According to The Post, “Classified documents relating to nuclear weapons were among the items FBI agents sought in” the raid, “according to people familiar with the investigation.”

Former President Trump denies report that FBI agents were looking for classified documents related to nuclear weapons, among other items, when they searched his Mar-a-Lago home earlier this week. https://t.co/5DHHN8ZDo8

In the Friday statement, Trump went on to blast the FBI for allegedly searching his residence without permitting others, including his lawyers, to be present, and once again floated a suggestion that agents may have been “[p]lanting information.”

Conservative commentators were also quick to slam The Washington Post’s claim, pointing out that if Trump was in possession of top secret nuclear weapons documents, federal agents should not have taken a year and a half to obtain them.

“Just to get this straight, we’re now supposed to believe that the material Trump had stored in his house was nuclear content so sensitive the FBI waited a year and a half to go get it and used the National Archives as a prop to do so?” wrote Daily Wire editor emeritus Ben Shapiro.

Just to get this straight, we’re now supposed to believe that the material Trump had stored in his house was nuclear content so sensitive the FBI waited a year and a half to go get it and used the National Archives as a prop to do so?

“If the FBI waited 18 months to seize ‘nuclear documents’ from a country club, everyone at the agency should be fired,” suggested Breitbart senior editor Joel Pollak.

If the FBI waited 18 months to seize “nuclear documents” from a country club, everyone at the agency should be fired.

The Washington Post’s allegation came just hours after U.S. Attorney General Merrick Garland had confirmed to reporters that he personally gave the go-ahead for the FBI raid on Trump’s residence at Mar-a-Lago in Palm Beach, Florida.

During the August 11 press conference, Garland said he “personally approved the decision to seek a search warrant” of Trump’s residence, adding the “department does not take such a decision lightly.”

The attorney general also announced the Department of Justice had filed a motion to have the FBI search warrant unsealed, following an order from a federal magistrate judge.

Trump has also called for the document to be released.

“Not only will I not oppose the release of documents related to the unAmerican, unwarranted, and unnecessary raid and break-in of my home in Palm Beach, Florida, Mar-a-Lago, I am going a step further by ENCOURAGING the immediate release of those documents, even though they have been drawn up by radical left Democrats and possible future political opponents, who have a strong and powerful vested interest in attacking me, much as they have done for the last 6 years,” Trump said in a statement Thursday night.

“This unprecedented political weaponization of law enforcement is inappropriate and highly unethical,” the former president said.

The FBI property receipt reviewed by Fox News on Friday reportedly indicates that agents removed about 20 boxes of items from Mar-a-Lago during the raid, including documents marked as “Various classified/TS/SCI documents,” referring to top secret or sensitive information.