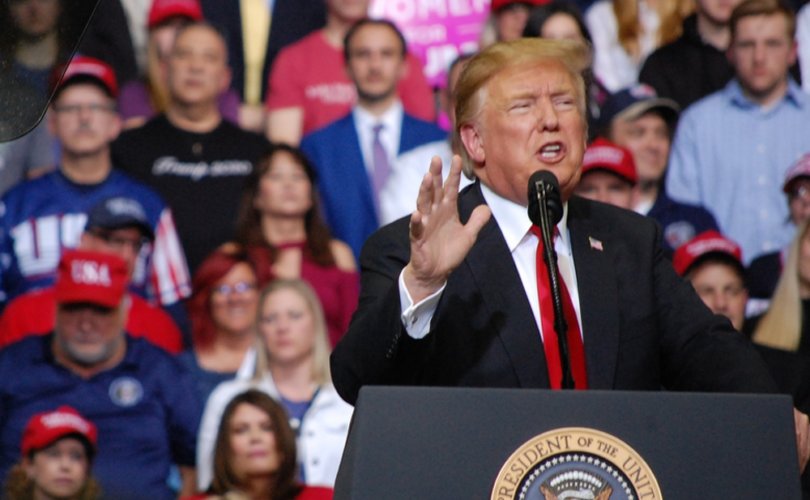 Trump was speaking at a campaign rally in New Hampshire Thursday where he assailed the Democrats on a wide range of issues, including abortion.

“Virtually every top Democrat also now supports late-term abortion, ripping babies straight from [the] mother's womb right up until the moment of birth,” he said. “And in the case of the Virginia governor – he's having a rough, rough time – in his case the baby is born, and then he goes to talk to the mother – the doctor talks to the mother – the baby is now born, wrapped, as he said. And then they decide whether or not to execute the baby.”

“That is why I have asked Congress to prohibit extreme late-term abortion, because Republicans believe that every child is a sacred gift of God,” the president concluded.

Left-wing “fact-checkers” such as Vox’s Aaron Rupar called Trump’s comments “false,” while the New York Times’ Linda Qiu summarized the claim and context surrounding it by writing only that Trump “misleadingly described an abortion procedure as a decision to ‘execute the baby’ after birth. (Doctors do not kill babies who survive abortions.)”

In fact, Trump was referencing two facts: that Democrats including the 2020 presidential field overwhelmingly oppose any restrictions on abortion (even legislation to mandate life-saving care for newborns who survive failed abortions), and comments Virginia’s Democrat Gov. Ralph Northam made in January that under a proposed abortion bill, a born-alive infant with “severe deformities” would be “delivered” and “kept comfortable,” but beyond that the child would only “be resuscitated if that’s what the mother and the family desired.”

Abortion defenders have justified their opposition to the federal born-alive bill by claiming that newborns simply aren’t left to die after botched abortions, and that current federal law is sufficient to deter it.

In fact, abortionists have been filmed admitting they would commit infanticide (as happened in a 2018 Ohio case highlighted by the pro-life group Created Equal), and current federal law lacks specific criminal penalties for withholding treatment from a newborn after a failed abortion.

“Above all, we will never stop fighting for the values that bind us together as one America. We will support, protect, and defend the Constitution of the United States,” Trump promised Thursday. “We will stand with the incredible men and women of law enforcement. We believe in the dignity of work and in the sanctity of life. We believe that faith and family, not government and bureaucracy, are the true American way.”