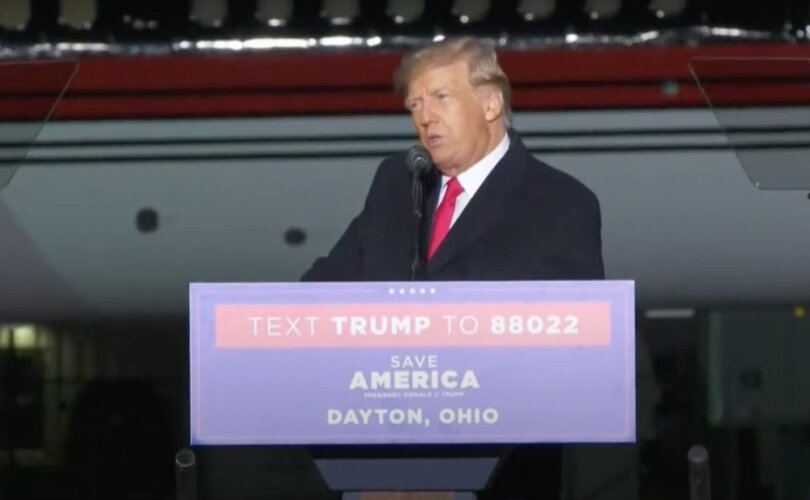 The 45th president of the United States made the remarks during a Monday speech at the Dayton International Airport in Vandalia, Ohio, where he promoted Republican candidates, including U.S. Senate contender J.D. Vance.

During a lengthy address, Trump strongly hinted that he plans to run for the U.S. presidency again in 2024 and warned that America under the Biden administration is careening toward full-scale communism.

“One of the worst and most sinister aspects of the Biden administration is their complete and total corruption of our justice system and the rule of law,” Trump told the rally attendees.

“Before our very eyes, Biden and his left-wing handlers are turning America into a police state, he continued, adding that the U.S. is becoming like “the communist countries that you would read about all the time.”

“The radical Democrats are locking up pro-life activists, persecuting their political opponents, silencing dissent, and using the full force of government, law enforcement, and the media to try and defeat our movement,” Trump said.

The former president’s comments come after the dramatic FBI arrests of numerous pro-life advocates made national headlines this year, including the raid on Catholic father of seven Mark Houck in September for alleged violations of the Freedom of Access to Clinic Entrances (FACE) Act.

In September, the FBI indicted pro-life Catholic priest Fr. Fidelis Moscinski on federal charges. In October, the DOJ hit 11 pro-life activists, including an 87-year-old survivor of a communist concentration camp, with federal charges for a peaceful protest at a Nashville, Tennessee abortion facility. At least one of the pro-lifers, Paul Vaughn (a father of 11), was arrested by the FBI at gunpoint at his home.

In addition to carrying out raids against pro-lifers, Biden’s FBI also raided Trump’s own Florida home and served search warrants or subpoenas against dozens of Trump allies.

During the Monday speech, Trump also mentioned that Catherine Engelbrecht, who leads the election fraud watchdog group True the Vote along with Gregg Phillips and was jailed for contempt of court last week, “was let out of prison today.”

Engelbrecht and Phillips had been jailed for refusing to divulge the name of a source for their claims against election software company Konnech, whose CEO was charged last month with felony embezzlement and storing the personal data of thousands of poll workers on a Chinese server.

The Biden administration’s targeting of pro-lifers and its political adversaries weren’t the only subjects of Trump’s speech.

The controversial figure also took time to address additional key concerns of conservative voters, including censorship, the persecution of the unvaccinated, and the indoctrination of children into radical transgender ideology.

Trump said Republicans must fight for parental rights against the “radical left lunatics” who he said seek to indoctrinate children into such divisive topics as Critical Race Theory (CRT) and transgender ideology. He also called on Republicans to strip CRT out of the military and the federal government and said men should not be allowed to compete in women’s sports.

Continuing, Trump said Republicans must take control of the House and the Senate in 2022 and reclaim the White House in 2024 and reiterated his earlier promise to “abolish all COVID mandates and lockdowns and rehire every patriot who was fired from the military with an apology and full back-pay.”

While Trump did not officially declare that he will run for the U.S. presidency in 2024, he provided a strong hint he will do so.

Toward the end of his speech, the former president said he will “be making a big announcement on Tuesday, November 15, at Mar-a-Lago in Palm Beach, Florida,” adding that he wasn’t saying anything definite then because “we want nothing to detract from the importance of tomorrow.”