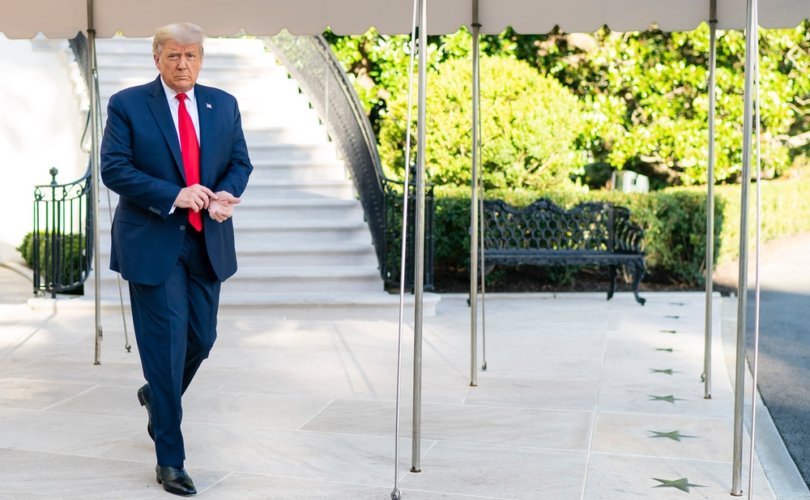 President Donald J. Trump walks from the South Portico entrance of the White House to speak to reporters Saturday, Sept. 19, 2020, before boarding Marine One to begin his trip to Fayetteville, N.C.Official White House / Tia Dufour

WASHINGTON, D.C., September 22, 2020 (LifeSiteNews) – President Donald Trump is moving quickly to ensure the Republican majority in the Senate gets to fill the Supreme Court vacancy created by the death of 87-year-old pro-abortion Justice Ruth Bader Ginsburg.

During an interview with “Fox & Friends” on Monday morning, Trump said he was planning to announce his nominee “on Friday or Saturday.” He also said recently that all the potential nominees on his shortlist are women and that he will choose a woman to fill the vaccancy.

The President explained he wanted to wait with the announcement until after the funeral for Ginsburg.

However, the funeral is scheduled for next week. “Ginsburg’s family plans to hold a private burial next week at Arlington National Cemetery, where she will be buried next to her husband Marty,” reported a local ABC station. This week, Ginsburg will lie in repose at the Supreme Court and, on Friday, at the Capitol.

In the interview, Trump said he had already narrowed his list of people he’ll consider for the Supreme Court to five women.

Judge Amy Coney Barrett of the U.S. Court of Appeals for the Seventh Circuit is considered by many observers to be the front runner. President Trump met with Barrett on Monday afternoon at the White House. Details from the meeting have not emerged.

The President has put two Justices on the Supreme Court, so far. First, he filled the seat left vacant by the death of conservative Antonin Scalia with Neil Gorsuch.

Gorsuch wrote the majority opinion for a decision earlier this year that reinterpreted longstanding anti-discrimination law to include homosexuality and gender confusion.

After a fierce battle in the media, as well as in the Senate, Trump’s second pick for the Supreme Court, Brett Kavanaugh, was also confirmed.

At the time, Amy Coney Barrett had already been one of the top contenders to fill the vacancy created by Justice Anthony Kennedy’s resignation.

Barrett had become a hero to social conservatives when, during her confirmation hearing for the U.S. Court of Appeals for the Seventh Circuit, Democratic Senator Dianne Feinstein attacked her for her Catholic faith, saying that “when you read your speeches, the conclusion one draws is that the dogma lives loudly within you.”