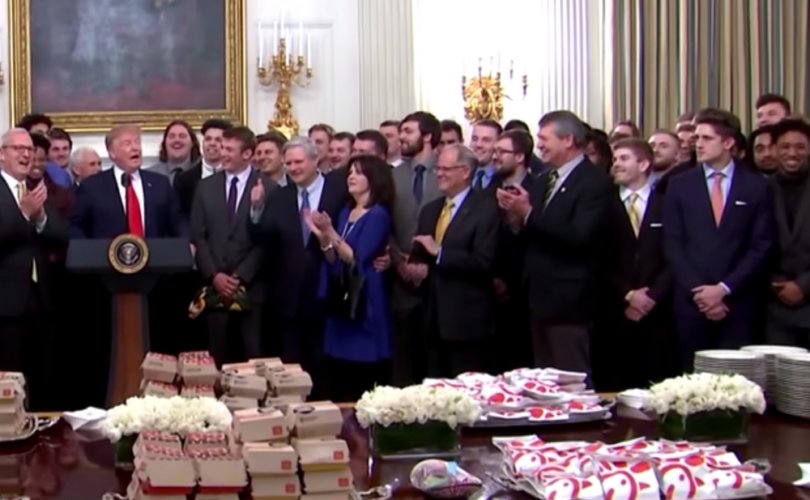 The Daily Wire noticed that LGBTQ Nation’s Bill Browning and The Advocate’s Tracy E. Gilchrist both protested President Trump’s decision to serve the popular chicken sandwiches to the NCAA Division 1 champions, who were in Washington, D.C. to celebrate their 38-24 victory over the Eastern Washington Eagles on January 5 in Frisco, Texas.

According to Forum News Service’s Jeff Kolpack, President Trump invited the team to the White House after a request by North Dakota Senators John Hoeven and Kevin Cramer.

The President spent half an hour with the team and joked with them about the choice of repast, which was apparently their own.

“We could have had chefs, but we're having fast food,” Trump told them. “I know you people.”

He indicated that he was aware it was a controversial choice by justifying it on patriotic grounds.

The LGBT activists complained about the choice of food, not because they deemed it unhealthy, but because it was from a Christian company whose leadership has in the past defended traditional marraige.

The Advocate’s Gilchrist referred to the Christian family-owned firm as a “virulently anti-LGBTQ company” and wrote that it had a “long history” of donating millions to what she called “anti-LGBTQ organizations.”

Gilchrist quoted the fast food company’s president and COO Dan Cathy as saying in 2012 that he supported the “biblical definition” of the family.

“We give God thanks for that. … We know that it might not be popular with everyone, but thank the Lord, we live in a country where we can share our values and operate on biblical principles.”

In his column in LGBTQ Nation on the fast food feast, Bill Browning also described the popular chain as “a company known for opposing LGBTQ rights.”

As well as supporting charitable organizations, Chick-fil-A funds college scholarships – in 2017 to the tune of almost $9 million. On its “Chicken Wire” website, the firm stated that it does not discriminate against anyone.

“Chick-fil-A is a restaurant company focused on food, service and hospitality, and our restaurants and licensed locations on college campuses welcome everyone,” it said.

“Our corporate office and our more than 2,300 restaurants nationwide are equal opportunity employers and we have no policy of discrimination against any group. We do not have a political or social agenda and more than 120,000 people from different backgrounds and beliefs represent the Chick-fil-A brand.”