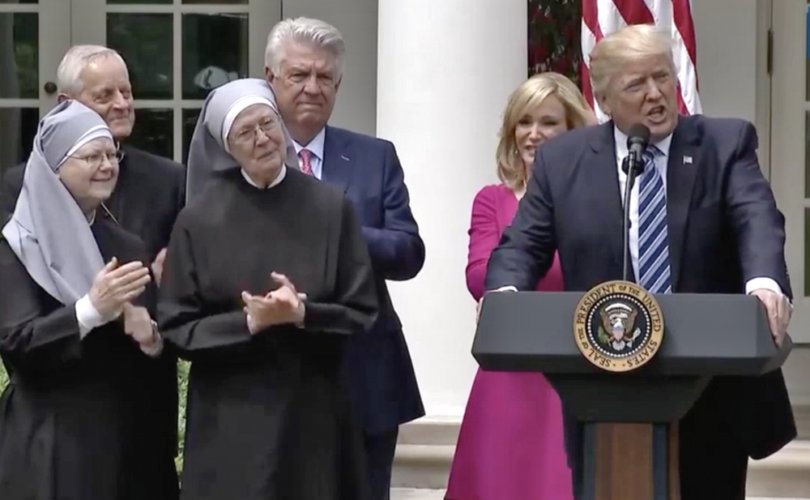 President Trump with little sisters of the Poor at the White House Rose Garden on the National Day of Prayer, May 4, 2017.

WASHINGTON, D.C., August 17, 2017 (LifeSiteNews) — The Wall Street Journal reported that President Trump is about to eliminate what pro-lifers call the most offensive portion in Obamacare.

The Journal says the Trump administration is “poised” to issue an executive order to take back the Health and Human Services (HHS) mandate that all employers pay for abortifacients, sterilization, and contraception insurance.

The HHS mandate has been the subject of lawsuits from church groups and Christian employers since it was implemented in 2011 by then-HHS Secretary Kathleen Sebelius, the former Kansas governor and Planned Parenthood-funded abortion activist. The president wanted to guarantee contraception — including abortifacient “morning-after” drugs — as a basic right for all citizens.

“Federal health officials are expected to finalize a regulation that would allow employers with religious or moral objections … to omit coverage,” WSJ reported.

“We applaud the Trump administration for rolling back the contraception mandate,” Students for Life of America’s Kristan Hawkins wrote in a press release today. “No person or group should be forced to pay for something that goes against their religious or moral beliefs by bureaucrats in Washington, especially drugs that have been proven to harm women and potentially end the life of an early human being.”

Trump’s anticipated order will allow employers with religious objections to opt out of covering contraception or abortion in their employees’ insurance plans. Employees may privately pay for such coverage.

Rep. Nancy Pelosi, D-California, characterized the potential order as a “sickening plan to roll back women’s access to contraception.”

Getting rid of Obamacare’s forced abortion coverage mandate was a major campaign promise of the president. “We are glad President Trump is following through with his pro-life, pro-religious freedom promises,” Hawkins added.

Christian Evangelicals, Catholic hospitals, Christian universities, and the USCCB have publicly pushed for the “choking” mandate to be rescinded.

Pro-lifers said it makes employers personally complicit in sin. New York Cardinal Timothy Dolan stated that “religious freedom is under attack, and we will not cease our struggle to protect it.”

This is “about religious freedom, the sacred right of any Church to define its own teaching and ministry,” Dolan wrote.

“Never before has the federal government forced individuals and organizations to go out into the marketplace and buy a product that violates their conscience,” the cardinal explained in another letter. “This shouldn’t happen in a land where free exercise of religion ranks first in the Bill of Rights.”

In reaction to public outcry, Obama issued “an accommodation” but wound up keeping the mandate as indirectly paid by religious employers. The USCCB noted that this was no change; the mandate still requires Christians to violate their consciences.

One of the lawsuits was brought by Little Sisters of the Poor. Under the Obamacare mandate, nuns practicing chastity would be forced to pay for abortion drugs, hysterectomy surgery, and birth control devices. In 2016, the U.S. Supreme Court indirectly supported the sisters, telling lower courts to seek ways the government can distribute contraception without forcing religious groups’ involvement.

Another of the dozens of lawsuits was brought by the craft store chain Hobby Lobby, owned by the devoted Christian family of David and Barbara Green. In 2014, the Supreme Court decided in favor of the Greens, ruling that “closely held” corporations could be exempt from the HHS mandate if there is another way to fulfill the law’s goal.

Burwell v. Hobby Lobby was a landmark case, but it was decided not on the grounds of religious freedom but on the grounds that the forced abortion coverage mandate was not the “least restrictive” method of implementing the Obama administration’s intent.

Pro-abortion organizations have vowed to sue if Trump issues any such executive order.

WSJ reported abortion activists as saying a Trump order could qualify as sex discrimination because it disproportionately affects women. They also turn the religious liberty issue around against Christian employers, claiming that a Trump order would infringe on the beliefs of employees.

“If the rule says any employer can withhold this benefit from employees, then … the government is enabling employers to impose their beliefs on others,” the American Civil Liberties Union’s Louise Melling told WSJ.

The anticipated executive order will take effect as soon as it is published in the Federal Register. An earlier draft of the promised order, leaked in May, was never issued.