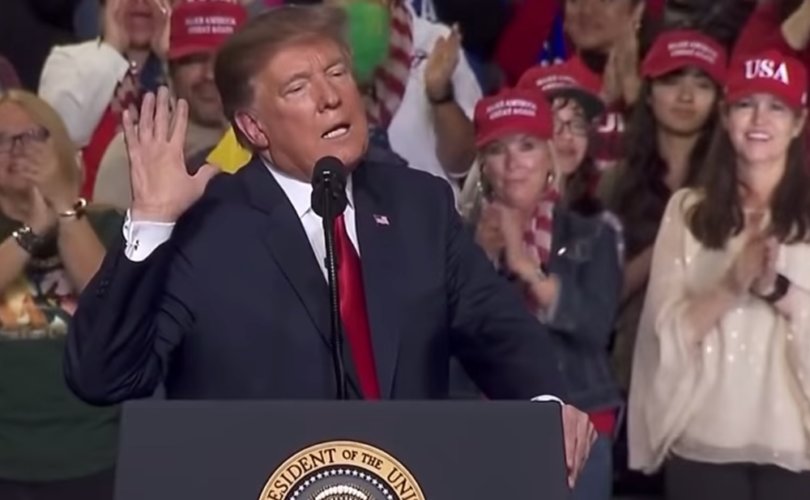 Trump was speaking at a rally in El Paso, Texas Monday evening, with one of his trademark stump speeches alternating between humor and seriousness on all the major issues of the day.

“Democrats are also pushing extreme late-term abortion, allowing children to be ripped from their mother’s womb right up until the moment of birth,” he said. “What's that all about?” Several states have either enacted or attempted to enact legislation that would expand the availability of abortions through the third trimester, with the only condition being “health” or fetal disability exceptions that pro-lifers argue are far broader than advertised.

“So in Virginia, the governor, he's gotten a little publicity lately,” the president continued. “I like him; keeps us out of the papers, I like it. I’d like to find a few more guys like this one. He almost moonwalked, his wife stopped him, ‘darling, darling it would be inappropriate.’ I want to see somebody try and imitate Michael Jackson in the moonwalk; this would not have been a good scene.”

Trump was referencing Northam’s press conference in which he retracted his previous admission that he was one of the men in a photo on his medical school yearbook page wearing blackface or a Ku Klux Klan robe. He claimed he had worn blackface on a separate occasion as part of a Michael Jackson costume, and appeared to briefly consider demonstrating whether he could still perform the late King of Pop’s signature move before his wife told him it would be “inappropriate.”

Turning more serious, Trump added that Northam “stated that he would even allow a newborn baby to come out into the world, and wrap the baby and make the baby comfortable, and then talk to the mother and talk to the father, and then execute the baby.”

In a radio interview, Northam had defended a since-tabled bill that would have allowed abortions up to birth by suggesting that in cases of “severe deformities” or a “nonviable” baby, a born-alive “infant would be resuscitated if that’s what the mother and the family desired.” He later said he had no regrets about his words.

“Millions of innocent, beautiful babies are counting on us to protect them, and we will,” Trump declared before repeating a call he made during his State of the Union address. “That is why last week I called on Congress – with your great congressmen over there, thank you fellas – to immediately pass legislation prohibiting extreme late-term abortion.”

After predicting that Virginia would “go Republican pretty soon,” the president declared, the “Democrat Party has never been more outside of the mainstream. They're becoming the party of socialism, late-term abortion, open borders, and crime.”

Trump concluded his remarks with a reaffirmation of America’s core values.