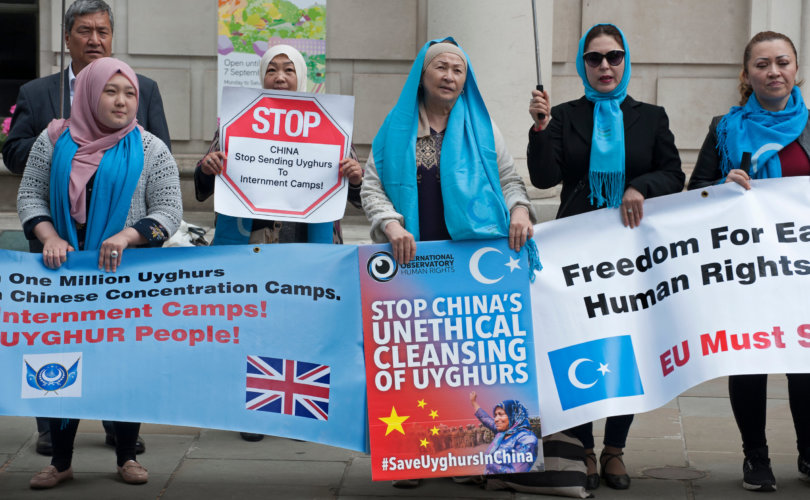 More than a million Uyghurs, most of whom are Muslim, are believed to be held in concentration camps by the Chinese governemnt. A 2018 UN report found that human rights abuses in such camps include brainwashing, beatings, torture, rape, forced abortions, forced sterilizations, and summary executions.

“The Act holds accountable perpetrators of human rights violations and abuses such as the systematic use of indoctrination camps, forced labor, and intrusive surveillance to eradicate the ethnic identity and religious beliefs of Uyghurs and other minorities in China,” Trump said in a statement about the law.

“I note, however, that section 6(g) of the Act purports to limit my discretion to terminate inadmissibility sanctions under the Act. In some circumstances, this limitation could be inconsistent with my constitutional authorities to receive as diplomatic representatives certain foreign officials under Article II, Section 3 of the Constitution. Accordingly, my Administration will treat section 6(g) of the Act as advisory and non‑binding. My Administration will make appropriate efforts to comply with section 6(g) of the Act by notifying the relevant congressional committees before terminating sanctions with respect to a person under the Act, but it will not treat the provision’s requirement for advance notice as binding to the extent that it interferes with the President’s conduct of diplomacy,” he added.

“This is a very strong statement to the totalitarians in Beijing,” Reggie Littlejohn, an attorney and founder of Women’s Rights Without Frontiers, told The Stream.

“It’s saying the U.S. is willing to challenge them on their human rights abuses,” she continued. “These are not just crimes against the Uyghurs on Chinese soil. They’re crimes against humanity.”

The law also requires U.S. agencies to report to Congress on human rights abuses in Xinjiang and to take efforts “to protect U.S. citizens and residents, including ethnic Uyghurs and Chinese nationals studying or working in the United States, from harassment and intimidation by the Chinese government.”

The World Uyghur Congress (WUC), one of the world’s largest organizations advocating for the human rights of the Uyghur people – said in a press release that the law is “the first legislative initiative to take concrete action to end the Uyghur crisis and hold those responsible for atrocities accountable.”

“Despite admonishments and expressions of concern, the CCP has continued to disappear more and more Uyghurs into internment camps and forced labour facilities, to strip away the very last of their rights and to undermine Uyghur culture, language, religion and identity without any material consequences,” the WUC state.

“Moving beyond rhetoric to taking real and meaningful action is essential to bringing an end to the Uyghur crisis.”

When the bill passed through the U.S. House of Representatives late last year, Sen. Josh Hawley, R-Missouri, told listeners on “Washington Watch” that it was an example of the United States finally beginning to “show some strength” in the face of the global threat from China.

“(I)t's vital to say to Beijing that oppressing your own people, that stamping out faith, that going after (religious) people and ethnic minorities is not permissible. We won't allow it … And China's desire to dominate the world is not something we're going to stand by and watch happen,” Hawley said.

Chinese foreign ministry spokeswoman Hua Chunying said last year after the bill passed the House of Representatives by indicating that the Chinese government would take action in response to the bill.

“Do you think if America takes actions to hurt China’s interests, we won’t take any action?” she said.

“I think any wrong words and deeds must pay the due price,” Chunying added.

The U.S. Commission on International Religious Freedom (USCIRF), an independent human rights watchdog group, thanked the Trump administration for passing the law and called for the “swift implementation” of sanctions against Chinese government officials known to have committed human rights abuses.