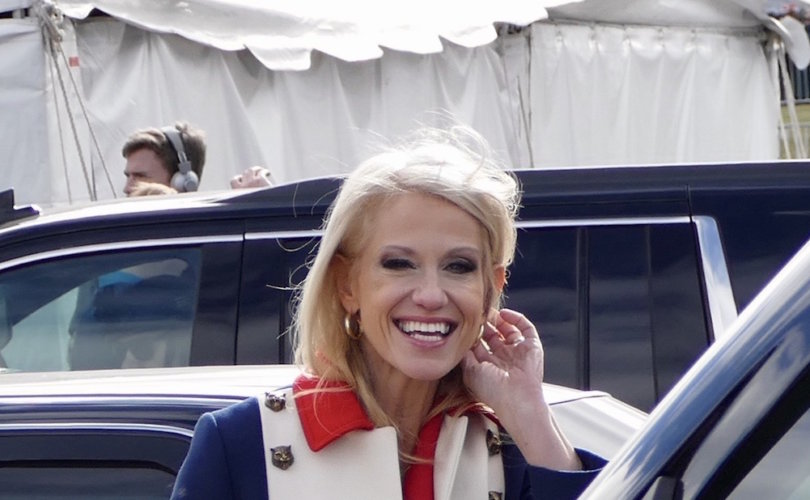 WASHINGTON, D.C., August 25, 2020 (LifeSiteNews) — Kellyanne Conway announced Sunday she is resigning from her post as counselor to President Donald Trump for family reasons.

Conway, 53, was the first woman to run a successful presidential campaign and is regarded as a key factor in Trump’s 2016 victory. Her resignation, which takes effect at the end of August, comes with the U.S. election fewer than 90 days away.

Susan B. Anthony List President Marjorie Dannenfelser responded to the news by expressing her organization’s “enormous” gratitude to Conway for her “service to President Trump and the pro-life movement.”

Conway, who spoke at the March for Life in 2017 along with Vice President Mike Pence, has “made an indelible mark on this administration and in history,” said Dannenfelser.

Trump “could not have placed his trust in a stronger advocate or more insightful adviser than Kellyanne Conway. Life is winning in America thanks to their leadership,” she said, adding that Conway’s “presence at the White House will be missed, but her wise counsel will endure and inspire us as we work to win four more years for the most pro-life president ever.”

Kellyanne’s husband, George Conway, also announced Sunday he is taking a break from Twitter and stepping away from the Lincoln Project, a PAC of current and former Republicans he helped found in December 2019 that is dedicated to defeating Trump, and which in April endorsed Democrat Joe Biden for president.

The couple have four children, twins George IV and Claudia, 15; Charlotte, 11; and Vanessa, 10. In a statement posted on Twitter, Conway said she was leaving the White House at the end of August to focus on them, and give them “less drama, more mama.”

God Bless You All.

“I will be transitioning from the White House at the end of this month. George is also making changes,” she wrote.

“We disagree about plenty but we are united on what matters most: the kids. Our four children are teens and ’tweens starting a new academic year, in middle school and high school, remotely from home for at least a few months. As millions of parents nationwide know, kids ‘school from home’ requires a level of attention and vigilance that is as unusual as these times,” she said.

“This is completely my choice and my voice. In time, I will announce future plans,” Conway added.

“For now, and for my beloved children, it will be less drama and more mama.”

The announcement came after a viral weekend tweet by Conway’s eldest daughter, Claudia, claiming that her mother’s job had “ruined [her] life.”

In a strange twist, one-time aspiring Democratic presidential candidate Marianne Williamson advised Claudia on Twitter to listen to her mom and “handle your issues with her privately.”

“I don’t agree with your mother politically, Claudia, but she’s still your mom. I promise you your life ahead will be better if you handle your issues with her privately. I’m sure she’d go to counseling with you, if you don’t already. Love has got to trump politics. It just has to,”  Williamson tweeted.

In recent months 15-year-old Claudia Conway has made a name for herself on TikTok posting anti-Trump videos, which garnered media attention because of her mother’s prominence. She describes herself as a “radical agnostic liberal/leftist” and has stated on social media she wants to be “emancipated” from her family. Claudia has also criticized her family and posted about her mental health issues on social media.

The Conways moved to Washington from a New York suburb following Trump’s victory. George Conway, a 56-year-old constitutional lawyer, quickly emerged as one of the president’s foremost critics, whereas Kellyanne Conway’s loyalty to Trump was such that, although a pro-life Catholic, she touted him in July 2019 as “the first president to start as president approving of gay marriage.”

The deepening political divide between the Conways, who married in 2001 and moved into the Trump Tower in Manhattan – where George introduced his wife to Trump – fuelled endless headlines and speculation, particularly when the animosity between the two men erupted in notable Twitter battles in March 2019 and May 2020.

George Conway told the Washington Post in March 2019 that he tweeted his opinions about Trump to “get it off my chest.”

For her part, Kellyanne Conway has brushed off any suggestion of family conflict and confined public criticism of her husband to suggesting to a Washington Post reporter in August 2018 that people see his tweets disparaging Trump as “disrespectful.”

Conway, who founded a polling and research firm 23 years ago and was a Republican strategist before she joined Trump’s campaign, is still scheduled to speak at the Republican National Convention on Wednesday.