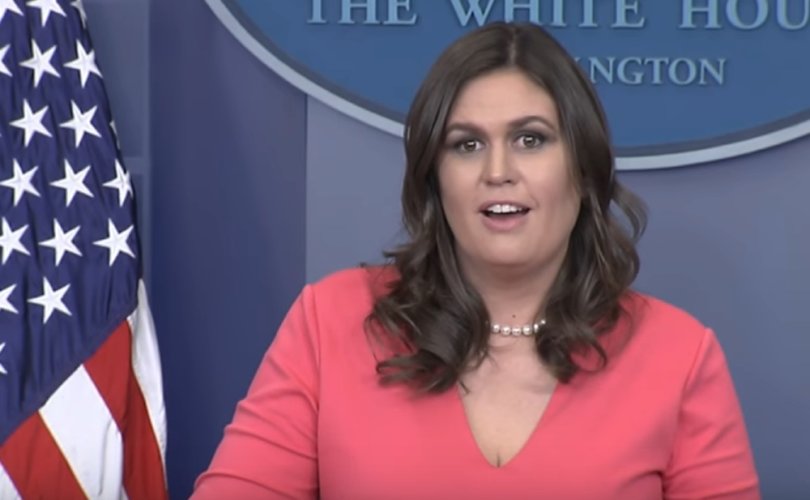 On a Tuesday night Fox News broadcast, Sanders addressed the “fake news” that has thousands of Americans furious with teenager Nick Sandmann and his fellow Covington Catholic High School students.

Sandmann, 16, and his classmates, participants in Friday’s March for Life in Washington, D.C., became victims of a smear campaign after they were harassed by members of a racist sect and then a Native American activist named Nathan Phillips.

Phillips claimed the teens had surrounded and taunted him, shouting “build the wall.” Some of the students, including Sandmann, were wearing MAGA hats, presumably signalling their support for President Trump.

When extensive video evidence exonerated the teenagers, President Trump tweeted his support for them, decrying the “fake news” that had libeled them.

“Nick Sandmann and the students of Covington have become symbols of Fake News and how evil it can be,” Trump wrote. “They have captivated the attention of the world, and I know they will use it for the good – maybe even to bring people together. It started off unpleasant, but can end in a dream!”

“We hope ‘fake news’ does not become the ‘forever brand’ of the news media,” Sanders told Fox News, “because it’s not good for the country, as the President said. He’d love for people to report things accurately.” (Her comments on the Covington controversy begin at 4:44 in the below video.)

Reflecting on the media pile-on and the widespread hatred for Nick Sandmann that ensued after the “Covington” story appeared, Sanders said that she’d “never seen people so happy to destroy a kid’s life.”

“When that becomes the norm in the media in America simply because they’re associated with this President, that is disgraceful and that should never happen.”

According to CNN, Sanders also told reporters that the White House had “reached out” and “voiced our support” for the Covington students.

“Certainly no one understands better than this President when the media jumps to conclusions and attacks you for something you may or may not have done,” she added.