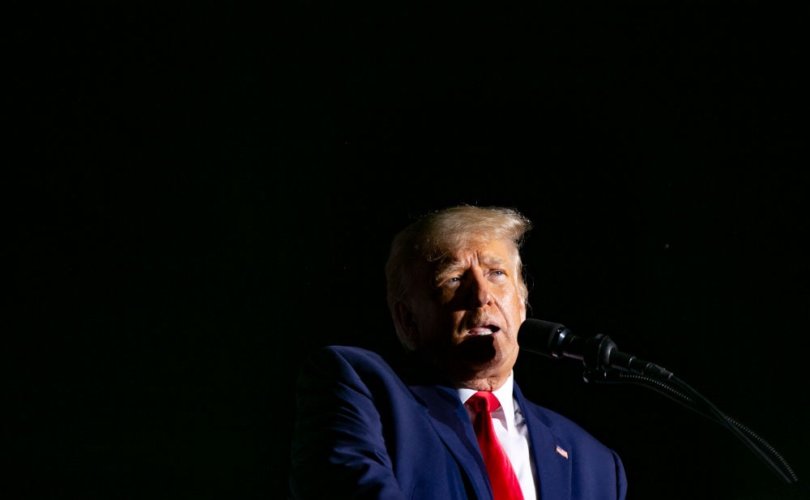 Former President Donald Trump speaks at a Save America Rally at the Aero Center Wilmington on September 23, 2022 in Wilmington, North Carolina.Photo by Allison Joyce/Getty Images

PALM BEACH, Florida (LifeSiteNews) — Former U.S. President Donald Trump on Wednesday warned that the alleged “sabotage” of two major gas pipelines in the Baltic Sea earlier this week could touch off a “major escalation” and potential “war,” and offered to “head up” a group to negotiate a deal.

Trump made the comments in a series of posts on his social media platform Truth Social after the Monday breaking news of the detonations that seriously damaged the Nord Stream 1 and Nord Stream 2 pipelines between Russia and Germany.

Pointing out that the Nord Stream 1 and 2 pipelines appear to have been sabotaged, Trump suggested Wednesday that the incident “could lead to major escalation, or War.”

“U.S. ‘Leadership’ should remain ‘cool, calm, and dry’ on the SABOTAGE of the Nord Stream Pipelines,” Trump advised in a second post. “This is a big event that should not entail a big solution, at least not yet.”

Arguing that the ongoing conflict between Russia and Ukraine “should NEVER have happened, and would definitely not have happened if I were President,” Trump advised that leaders refrain from making “matters worse.”

“Be strategic, be smart (brilliant!), get a negotiated deal done NOW,” Trump said. “Both sides need and want it. The entire World is at stake. I will head up group???”

As LifeSiteNews previously reported, experts believe the detonations were a deliberate, targeted attack on the pipelines. Commentators have characterized the destruction of the pipelines, resulting in the release of massive amounts of natural gas into the sea and air, as “one of the great environmental catastrophes of our time.”

With no known perpetrator of the alleged attack, Fox News host Tucker Carlson insinuated Tuesday that the Biden administration may be responsible for blowing up the pipelines, citing President Joe Biden’s statements from this February in which he said that “If Russia invades [Ukraine] … then there will be no longer a Nord Stream 2. We will bring an end to it.”

READ: US gov’t accused of sabotaging major European gas pipeline after Biden threatened to ‘end’ it

NATO declared the explosions to be an act of “sabotage” on Thursday, adding that “any deliberate attack against allies’ critical infrastructure would be met with a united and determined response.”