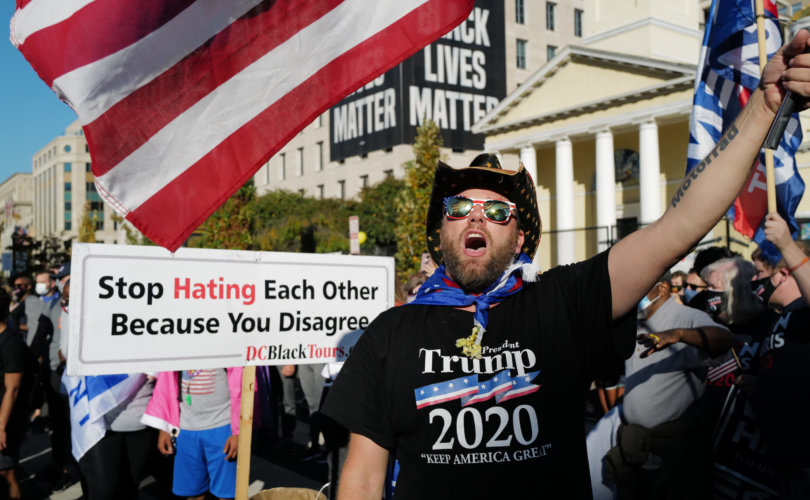 The March for Trump, organized by Women for America First, will begin at Freedom Plaza and make its way to the Supreme Court. The group initially had Facebook, Mailchimp and Eventbrite pages, but all three were shut down by the tech companies.

THE MARCH IS NOT CANCELED

Next it was @Mailchimp

Now #Eventbrite #BigTech is trying shut down our march

But we won’t let them pic.twitter.com/zYfRM3swfN

In an email to LifeSiteNews, Women for America First said, “We are aware of other events planned by other organizations this weekend, (and) we are not affiliated with those events. We are the only organization with a permit for Freedom Plaza.”

The Facebook page of the “Million MAGA March” indicates that it will also meet at noon in Freedom Plaza. A Politico report attempted to paint the gathering as “far-right” and claimed the “disparate tribes of MAGA Nation,” including “white nationalists” and “neo-Nazis,” will descend on the city.

In addition to the marches, Truckers for Trump, Drag the Interstate and Infowars have organized vehicle rallies as well.
Trump supporters will not be the only ones taking to the streets. “Refuse Fascism” is organizing protests in several cities and is set to meet at Freedom Plaza at 11:30 a.m.

Asked about the turnout expected for the pro-Trump rallies, White House press secretary Kayleigh McEnany told Fox News this morning that she expected a large crowd.

“I think it’s going to be quite large from what I’m hearing. … People want to show up and have their voice heard,” she said.
“He has 72 million people who love him, who want to show up and support him. His base is strong and there is no denying that this President is the titular head of our party for many decades to come and the enthusiasm you see among his base is something to behold,” she continued. “I anticipate quite a large event this Saturday.”