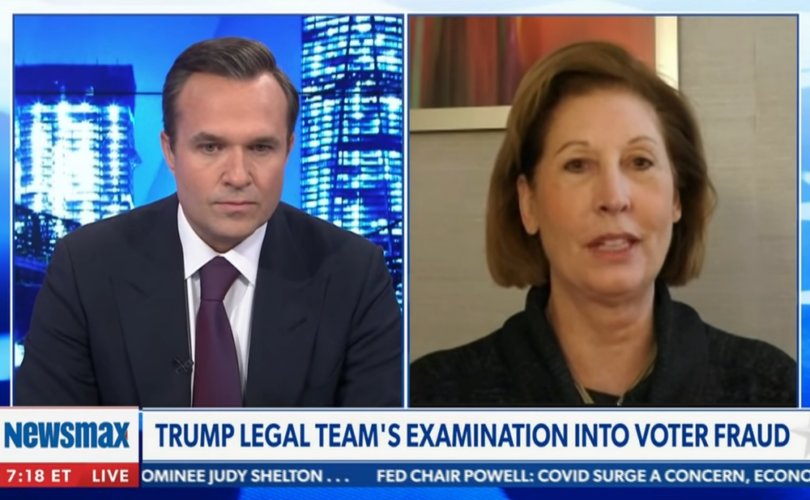 “[T]he election could not have been more rigged than it was,” Powell said.

“We know Dominion has a long history of rigging elections. That’s what it was created to do to begin with. We’ve introduced the affidavit of a person who worked with Maduro—a high-ranking military officer who saw it all happen and explained how it worked—and it’s out for the public to see on my Twitter feed.”

“So, don’t tell me there’s no evidence of fraud. We’ve got increasingly mounting evidence of significant fraud across multiple states that casts into question the validity of the elections in every swing state, including Nevada and Arizona, Michigan, Wisconsin, Georgia, and it went beyond that too,” she revealed to Kelly.

Kelly and Powell then turned to a contract between the California county of Santa Clara and Dominion which, according to item 2.26 of specifications and requirements, allows staff to “adjust” the ballot tally based on a review of the scanned ballot images.

Powell also noted that the contract “had a back door so it could be manipulated by anyone who had access to it through that back door.”

She also remarked that the similarity between the Santa Clara-Dominion contract and the sworn testimony of the Venezuelan military officer is striking.

Powell related that the former Venezuelan military officer’s affidavit explains how Dominion’s software “was created for that very purpose: so Hugo Chavez would never lose another election. And he did not after that software was created; he won every single election.”

Powell disclosed that the officer was “high-ranking” and “very close to Hugo Chavez” and that he is “absolutely disgusted with what he’s seen and was participating in when he was with Mr. Chavez.”

“He saw how it all worked, he was at meetings where it was fully briefed, and he wants this country not to fall prey to the same corruption and tactics that were used in Venezuela,” Powell added.

“[Dominion is] a foreign company no matter how you look at it, so they’ve already violated the President’s order against foreign interference in our elections. Our votes were actually eventually counted in Barcelona, Spain or Frankfurt, Germany on foreign servers,” stated Powell.

Powell also remarked that the effort to keep the truth from getting out is “absolutely stunning.” She further stated: “[Y]ou have to realize that every tech company, every media company, every social media company, scads of globalist corporations have been doing business in countries with these dictators that have been installed through this rigged election system for decades.”

She continued: “The corruption is actually worldwide. It is going to upset a countless number of elections across this country and around the world. So, we need to do that to get rid of the corruption.”

“We can add a fraud claim to any of the states in which litigation has already been filed as soon as we can get the rest of the material together…Witnesses are coming forward every day that are fed up with the corruption in Dominion and in the states and in the counties and in the country,” Powell shared.

Powell maintains that the sole reason for the “glitches” during the ballot counting was because Donald Trump had way more votes than they had calculated for him.

“Their algorithms wouldn’t perform the functions they’d originally performed or were set to perform. They couldn’t make up the vote count he [Trump] had gotten so many hundreds of thousands more than they planned. So, that’s when they had to stop the counting and come up with a way to backfill the votes or destroy votes for Trump while they fabricated votes for Biden,” she said.

“[T]he will of the people in this country was that Donald Trump won in a landslide if we can get to the bottom of it, and I am determined to do that, I think we’ll find he had at least 80 million votes,” Powell concluded.