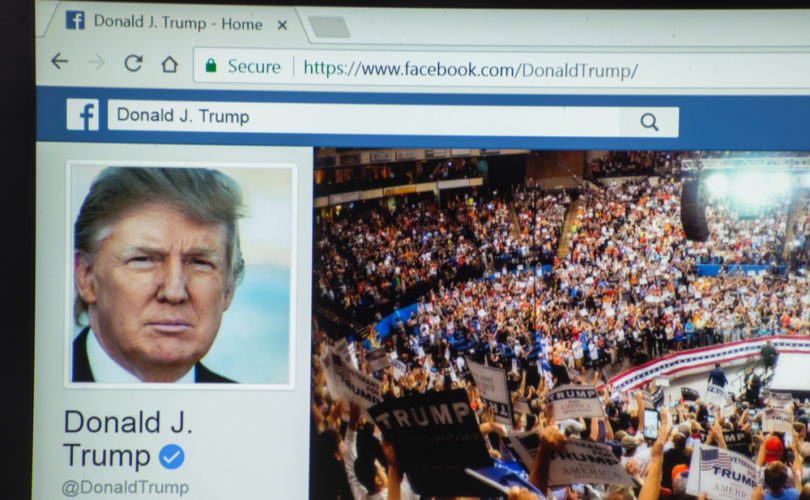 June 4, 2021 (LifeSiteNews) — Former President Donald Trump berated Facebook and its CEO Mark Zuckerberg Friday for the company’s announcement that Trump would remain banned from the platform for two years, calling it an “insult” to his supporters. He also hinted at another run for the White House.

Earlier Friday, Facebook’s Vice President for Global Affairs Nick Clegg announced “new enforcement protocols to be applied in exceptional cases” such as Trump’s, starting with Trump’s suspension from the platform, which will remain in effect until January 7, 2023, two years after his suspension began at the beginning of this year.

Facebook used the January 6 riot at the U.S. Capitol building, which Democrats and their allies tried to argue was “incited” by Trump, as a pretext to ban Trump from the platform. The company’s “Oversight Board” announced last month it was upholding Facebook’s decision, while at the same time calling its indefinite nature “standardless,” and calling on the company to “review this matter to determine and justify a proportionate response that is consistent with the rules that are applied to other users of its platform” within six months.

Citing the Oversight Board (an “independent” body set up by Facebook itself last year) as vindicating Facebook’s original suspension of Trump as “right and necessary,” and claiming that Trump’s speech constitutes a “risk to public safety,” Clegg added that after the period is over Facebook may prolong Trump’s suspension pending “risk” evaluation. If his suspension is ever lifted, he would then be subject to a “strict set of rapidly escalating sanctions that will be triggered if Mr. Trump commits further violations in future, up to and including permanent removal of his pages and accounts.”

The decision limits Trump’s ability to directly impact the 2022 midterm elections via social media, angering conservative opponents of social media bias, but ironically some liberals are upset for the opposite reason: that Facebook’s timeline leaves the door open for Trump to return in time for another presidential run.

“Facebook’s ruling is an insult to the record-setting 75M people, plus many others, who voted for us in the 2020 Rigged Presidential Election,” Trump responded. “They shouldn’t be allowed to get away with this censoring and silencing, and ultimately, we will win. Our country can’t take this abuse anymore!”

“Next time I’m in the White House there will be no more dinners, at his request, with Mark Zuckerberg and his wife,” he added in a follow-up statement. “It will be all business!”

Trump has so far refused to state whether he intends another presidential run in 2024, but this latest statement offers the strongest hint yet in the affirmative. The former president’s emotional connection with many Republican voters keeps him at the top of theoretical Republican primary polls, as conservatives vigorously debate his political viability and whether he would be the best choice available next time.