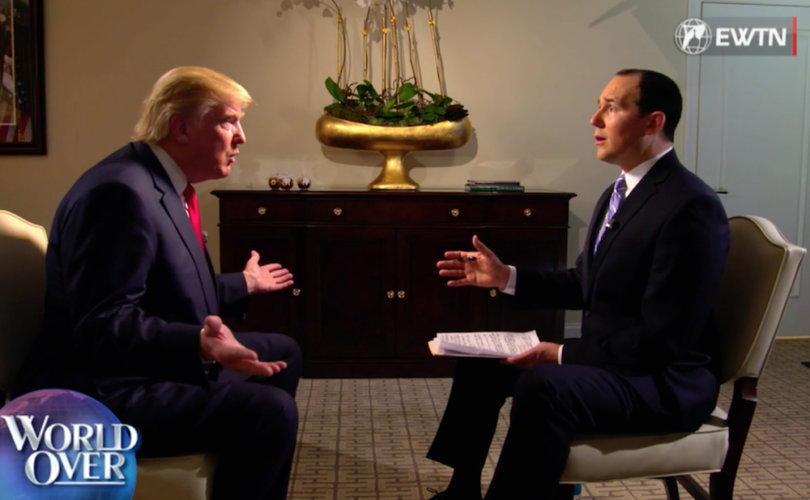 DORAL, Florida, October 28, 2016 (LifeSiteNews) – Donald Trump shed some rare light on his prayer life during a recent EWTN interview, telling lead anchor Raymond Arroyo he does pray while at the same time displaying some reserve.

The Republican presidential nominee is not known for being outwardly devout in faith and has been criticized for that along with charges of brazenness, harsh rhetoric, lewd comments, and allegations of sexual assault.

With the claims against Trump dominating the news cycle, the discussion on his faith life has all but ceased, making Arroyo’s question during the interview on Trump’s prayer life unique, and also opening the door for a candid answer.

“I want to talk personally about you,” Arroyo told Trump. “When you pray, what do you pray for?”

In the discussion between Arroyo and the GOP nominee that touched on the allegations and other hot-button issues, the most poignant moment may have come with Trump’s response and a departure from his often-brash demeanor.

Trump, who has also taken criticism for statements and attitude suggesting he is beyond reproach and doesn’t need to ask the Lord’s forgiveness, spoke candidly about prayer in his life while also drawing a boundary line with Arroyo.

“I don’t want to talk to you about that,” Trump politely told him at first.

Self-effacing, he immediately continued, “I mean, I pray. It’s very personal to me.”

“I’m a person of belief,” Trump said calmly. “But I certainly, you know, I pray for my family, I pray for our country, but I don’t want to talk to you about that. I think it’s very personal.”

“OK, it’s between you and God,” Arroyo responded to him.

“It is between me and God,” Trump affirmed.

Arroyo also asked Trump if he had a favorite saint.

“You are Presbyterian, so I don’t want to drag you into other realms,” Arroyo began. “Do you have a favorite saint?”

Trump applauded St. Teresa of Calcutta, saying she was “great.”

But he also praised Pope St. John Paul II, remarking that the late Holy Father had a distinct quality and that he admired his mix of strength and an extraordinary warm-heartedness.

“Why?” Arroyo queried him.

Earlier in the interview, Trump had told Arroyo about the turning point in his pro-life conversion, telling Arroyo, “Yes, I’m pro-life,” and that this change was also personal.

Trump’s sitdown with Arroyo came in the final weeks of a combative campaign, where hacked emails have exposed anti-Catholic prejudice in the Clinton campaign.

Trump also told Arroyo that Clinton should apologize for the biased remarks by her staff.