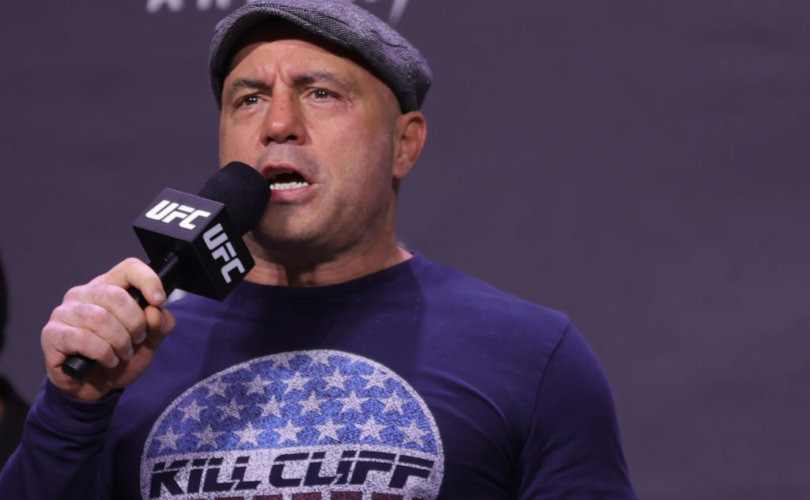 “Joe Rogan is an interesting and popular guy, but he’s got to stop apologizing to the Fake News and Radical Left maniacs and lunatics,” Trump said in a statement Monday. “How many ways can you say you’re sorry? Joe, just go about what you do so well and don’t let them make you look weak and frightened.

“That’s not you and it never will be!” Trump concluded.

Trump himself recently admitted that, while president, he refrained from firing Fauci, despite Fauci’s dishonesty before the Senate, to avoid a “firestorm on the left.”

“Fauci misled the Senate when he said the NIH did not fund gain-of-function research. Should you have fired Fauci?” Maria Bartiromo asked Trump in a December Fox News interview.

“So a lot of people asked me that question, and I did it right. Cause if you do fire him, you’re gonna have a firestorm on the left again, as usual,” Trump replied.

Rogan posted an apology video this weekend after the release of a video compilation combining short clips of Rogan using the N-word on his podcast, taken out of context.

Rogan disavowed his past use of the word, despite his clarification that he was not actually calling people the N-word, but used it to quote others while discussing how they used the word.

Writing for Breitbart, Allum Bokhari said Rogan “is making a classic error — assuming the torrent of hate he’s facing comes from a place of good faith, and that he can make it go away by addressing the mob’s concerns, apologizing, and pledging to do better.”

Rogan has since called the compilation video a “political hit job,” adding in a Tuesday podcast, “I do think you have to be very careful to not apologize for nonsense.”

Before Rogan’s N-word controversy, he drew heat from liberal media and public figures for hosting guests like Dr. Peter McCullough and Dr. Robert Malone because they challenged the mainstream COVID narrative.

While Rogan released a video defending his hosting of Malone and McCullough, a highly published epidemiologist and cardiologist, he also openly conceded to Spotify’s attempt to address accusations of COVID “misinformation” from Rogan’s podcast.
​​
Spotify announced January 30 that it would add a “content advisory” warning to all episodes including discussion of COVID, and would direct people to a “COVID-19 Hub” with “links to trusted sources” and info from “public health authorities.”

Rogan didn’t just accept the decision — he appeared to wholeheartedly support it.

He responded, “One of things Spotify wants to do, that I agree with, is that at the beginning of these controversial podcasts — specifically the ones about COVID — is to put a disclaimer and say that you should speak with your physician and that these people and the opinions that they express are contrary to the opinions of the consensus of experts, which I think is very important. Sure. Have that on there. I’m very happy with that.”

Rogan pledged “to try to balance out these more controversial viewpoints with other people’s perspectives,” and said of Spotify, “I’m very sorry that this is happening to them and that they’re taking so much heat from it.”

“No, he shouldn’t have apologized,” DeSantis said during an interview with Fox News Digital. “I mean, you see what happens? The mob will come after people, and they’re targeting Rogan because he’s threatening to upset the apple cart on some of the things that they’re holding dear. And with COVID, he’s just bringing opposing views. He’s letting people decide.”

“I think a lot of the legacy outlets and I think the left fear the fact that he can reach so many people, and so they’re out to destroy him,” DeSantis noted. “But what I would say is don’t give an inch. Do not apologize. Do not kow to the mob. Stand up and tell them to pound sand; if you do that, there’s really nothing that they’re able to do to you. The only way they have power is if you let them get your goat.”